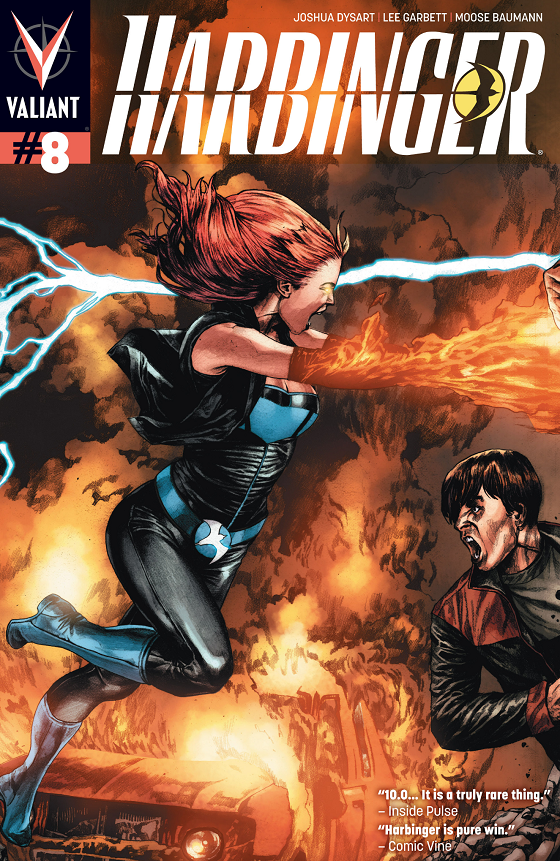 Review by Adam Shaw (with quotes from Steve Seigh)

I like to think that we here at Talking Comics are somewhat of a family and a community. I hope that most of the readers here are also listeners of the podcast put out by our editorial crew each week. In this week’s show Steve Seigh talked about the first seven issues of Harbinger. If you have been interested in checking out the series, then give it a listen. Steve gives is a pretty fair assessment.

So far Harbinger has been given a pretty enjoyable story, but it has not been without its faults.  Steve says, “Harbinger is a very strange book… I like it very much… I have a couple of issues with it, but I’m still intrigued… For all the things I feel that it misses… It makes up for it by adding another cool element to it.” I agree with Steve. There are a lot of cool elements that get introduced. It’s good world building, but it feels like perhaps too much is being introduced without answering some of the questions.

Issue #8 sees Peter and his crew continuing their search and recruitment of psyiots. It’s pretty uneventful compared to some of the past issues. Issue #8 almost runs as a carbon copy of the last issue. Find new recruit. Elements of his life are shown. Stuff happens. He joins up. Alright, I glossed over the stuff. It’s part of what is going to be tying us into Bloodshot and Harbinger Wars. Unfortunately,

Steve had a gripe with this issue that he took to twitter. He felt the issue was “marred by that Brutal Legend ripoff character and his pop culture humping dialogue.” Admittedly, the new character John makes a lot of references to pop culture, but that’s who he is. It’s not really unexpected from a crippled boy that has spent his life watching TV and living in his own fantasies. Pop culture is all he has and the references didn’t bother me. Although, I appreciated the insight into John’s fantasy world as related to his powers, I would’ve liked to have seen more of what Harada or Project Rising Spirit are scheming.

If you listened to the podcast you will recall that Steve also talked about the art. He called it “street level.” I’ve seen worse at the big two, so it hasn’t really put me off. With the addition of Lee Garbett on art in this issue, I feel that things have improved immensely. You Stephanie Brown fans will remember him from Bryan Q. Miller’s run on Batgirl.

I’ve enjoyed Harbinger. It is not my favorite of what Valiant has on the shelves, but it has a pretty cool mythos tied in to it. For issue #8, I am going to say this is passable. If you’ve been enjoying the series so far, you’ll probably still pick this up, but not enough happens for me to warrant saying, “BUY IT!”
I’ll be sticking around for the upcoming Harbinger Wars, and I’m looking forward to some of Harada’s backstory in issue #0 in two weeks.

Jumping On Point: Go back to either issue #5 or #6. If you don’t mind dropping ten bucks, then pick up the trade.

Afterthought: I know Steve had his issues with the pop references, so I’m kind of glad I don’t live in America to understand some of them. Besides the name, I don’t know enough about the Kardashians to make me hate them enough to contemplate dropping a book at the mention of their name. So for Steve and our readers, here is the Jeff Lemire variant cover to enjoy! 🙂 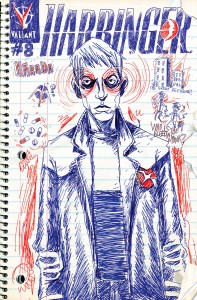