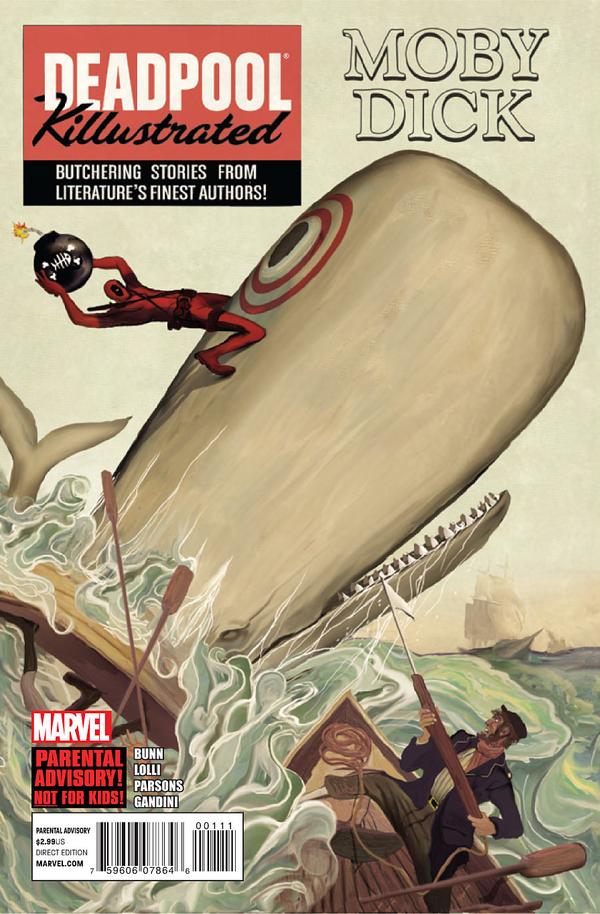 Last year’s highly divisive “Deadpool Kills the Marvel Universe” is back with a sequel, this time featuring the Merc With a Mouth taking on some of the biggest names in literature.

The story follows Deadpool, now having killed all of the superheroes in all of the universes that he could locate, finding himself at a bit of a crossroads. With everybody dead, he worries that a new universe could pop up or that the “progenitors” could bring them back into continuity whenever or however they please. He realizes that the only way for all the heroes to stay truly dead is to cut them off at the source. How do you do that? Kill the literary inspirations and keep the “progenitors” from ever coming up with the ideas for the heroes in the first place.

From the beginning, it’s easy to tell that Bunn knows his way around the character of Deadpool. He knows him inside and out and it really works to this book’s advantage. Some jokes do fall flat, and some of his exposition/explanation could have been more condensed, but you can really tell underneath the dark exterior that this is a fun book at heart. It’ll be interesting to see if this concept can hold for four issues, but as an introduction, Bunn does a great job with the set-up and I’m intrigued to see where it goes.

Matteo Lolli’s art is really one of the bigger selling points of this issue. The introspective moments, where Deadpool is pondering existence and whether what he’s doing matters or not, could have been boring if handled by a different artist. What Matteo does is play with shadows, angles, and easter eggs to make what you’re reading really pop off the page. The coloring is beautiful, the layout of the pages is great and the action scenes are wonderfully handled. A fantastic job all around.

Deadpool: Killustrated is an intriguing read that even people who disliked “Deadpool Kills the Marvel Universe” are sure to probably enjoy. Some jokes do fall flat, and it can feel a little exposition heavy in the beginning, but the fun concept mixed with great art makes this at least worth checking out if you’re interested.