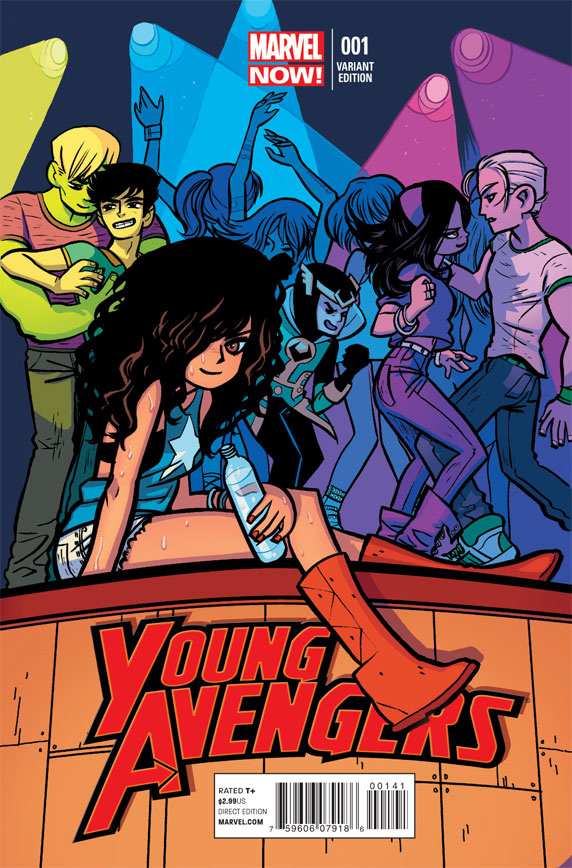 Hawkeye wakes up in a strange bed, she has just had, what would appear to be, a night of passion with Marvel Boy (whose real name she can’t quite remember)… and then the Skrulls attack.  This is Young Avengers #1, a book that features a cast of characters, save for Kid Loki and the aforementioned Hawkeye, that I know nothing about. It’s also a book that hits the ground with it’s wheels all ready spinning at 100 miles per hour, and seems uninterested in being overly enlightening about its cast of adolescent Avengers. Yet, somehow, despite not knowing Wiccan and Hulkling from a hole in the ground, I found Young Avengers #1  to be an engaging, entertaining and surprisingly emotional kick off to my most anticipated Marvel series of the year.

With Journey Into Mystery writer Kieron Gillen proved he could strike a perfect balance between the grandiose, the peculiar and the emotionally true, and it appears he is bringing that same flair to this new endeavor. After that initial Skrull encounter, we are tossed down to earth where we discover Wiccan and Hulkling living together. I knew nothing about these two before opening the pages of Young Avengers #1, but Gillen does a masterful job of giving the reader an understanding of their deep relationship. They are teenagers in love, trying to find their place in the world and their first  conversation is so chalk full of complex emotion, that it endears them to you immediately. Gillen also wastes no time in demonstrating their powers, yet it’s never in a showy way. Instead, he has them being super in a way that is intrinsic to the story, and it goes a long way to making the whole endeavor feel very organic.

After we spend a little time in this emotional heaviness, we are shepherded off  to where Kid Loki is up to his old tricks. For those unfamiliar with the God of Mischief’s new form, just know that he is now a child who has been given a second chance to be the hero he never was. It’s an amazing, fresh take on this old villain that positions him as one of the best characters in the Marvel universe.  In Young Avengers #1 the little troublemaker is on a mission not yet revealed to us, but even with this lack of information his time on the page is full of humor and energy. I sincerely hopes this book takes off if for no other reason than a whole new group of people get to take in the character.

Jamie McKelvie’s art and panel layouts are overflowing with energy and a unique sense of style. The layout of the Skrull attack is kinetic, action packed and  just plain awesome to behold as is the other “music video” type fight between Loki and Miss America. But, the most impressive thing about Mr. McKelvie’s work is the expressiveness of his characters’ faces. With every comical look of shock, sly smile of desire or stare of deep determination McKelvie brings these characters to life. I’ve wanted to go back and read Gillen and McKelvie’s Phonogram for a long time, and now I think I have to make that a priority.

Buy It – Young Avengers #1 is a stylish, entertaining and surprisingly emotional book that feels like the beginning of something special. Kieron Gillen is the kind of writer who brings something unique to every book he is on and Jamie McKelvie’s art is the perfect compliment to that. There is a lot going on in Young Avengers #1 which in lesser hands could lead to a feeling of being left behind. However, I have a sneaking suspicion that this title will be soon be put alongside  Daredevil, Hawkeye, FF and the ever growing list of books at Marvel that emphasize humor and fun as much as they do violence and pathos. For my money this is the most impressive Marvel NOW title to date and If you like your super heroes with slightly different twist you should be adding this to your pull list.