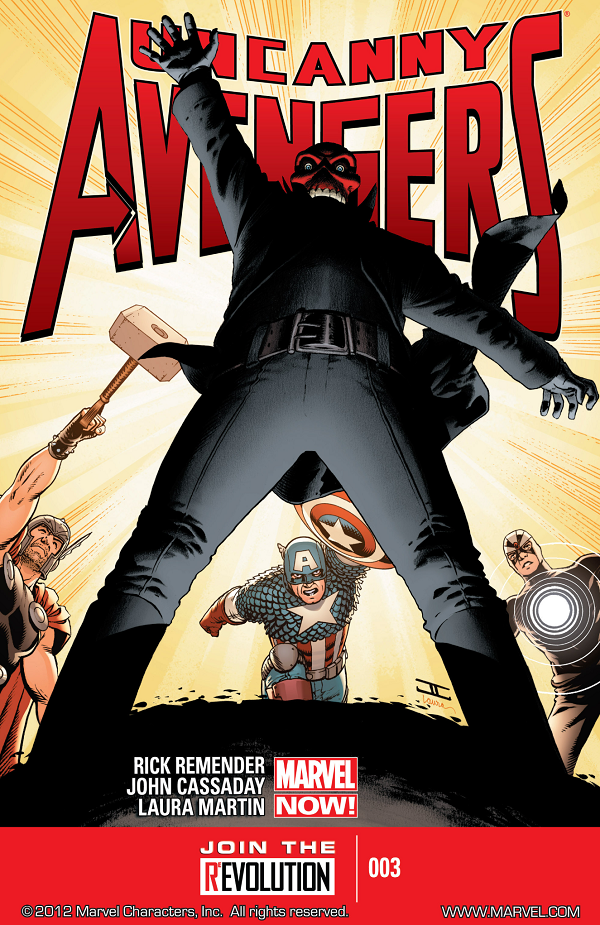 Finally! It has been two months since the last release of Uncanny Avengers! In a world where every other Marvel book double-ships, it is a rarity to see one ship so late! We’ve been waiting a while for issue #3, so that puts a little pressure on the book. Personally, I wasn’t thrilled with the first issue, and thought the second was alright. While waiting for the third issue, I thought, this better be a damn good book.

In case you forgot what happened two months ago, or are a new reader, let me remind you with where we were. Captain America chose Havok to lead an Avengers team that included mutants. Scarlet Witch and Rogue were captured by Red Skull and his band of genetically modified super freaks. Red Skull took Professor X’s brain and fused it with his own. Now he is a super psychic Nazi crazy guy. Got it? Cool.

This issue is a pretty gruesome one. With some pretty horrific psychic power, Red Skull turns the residents of New York against mutants (and a few people they think are mutants). It sounds like a pretty basic story at the core, and honestly it is. What really makes it shine is how Remender brings out individual character strengths and flaws.

As Remender is also writing Captain America I think he has a pretty good grasp on the character. Red Skulls mind influence has a pretty strong effect on humans, and Captain America is no exception. Remender clearly shows us the internal conflict Cap is going through. He has a strong resolve and is resilient, but sometimes that isn’t enough to combat such a great influence on your own. You need someone to set you straight, and it’s at this point that Remender reminds us why Havok is in charge.

This issue is pretty much combat from start to finish, but there is a lot of characterization done throughout. Each of the team members gets a small moment to shine through their actions or their words. Character weaknesses are also exploited and it is nice to see that these gods among men also have their flaws. I don’t want to spoil anything for you, but there were points in the book where I actually said out loud either “Damn!” or “Oh, s**t!”

Unfortunately, the art in Uncanny Avengers is not my favorite. John Cassaday isn’t a bad artist, and he’s done some awesome work. What I don’t really care for is his inking. Almost every time we have a woman in a panel her upper lip is inked black. I understand about shadows and such, but maybe leave it to the colorist to shade it a darker color. That’s a pretty particular gripe, but it is something that just jumps out at me. If a book is going to take two months to come out, the art better be damn near perfect.

I would say that you should buy this book. If you have been waiting for it or whether you are just jumping on this is a fantastic and fun read with some nice characterization work. Despite my gripes with the art, this is a pretty damn good book. This is coming from someone that didn’t particularly care for the first two issues.