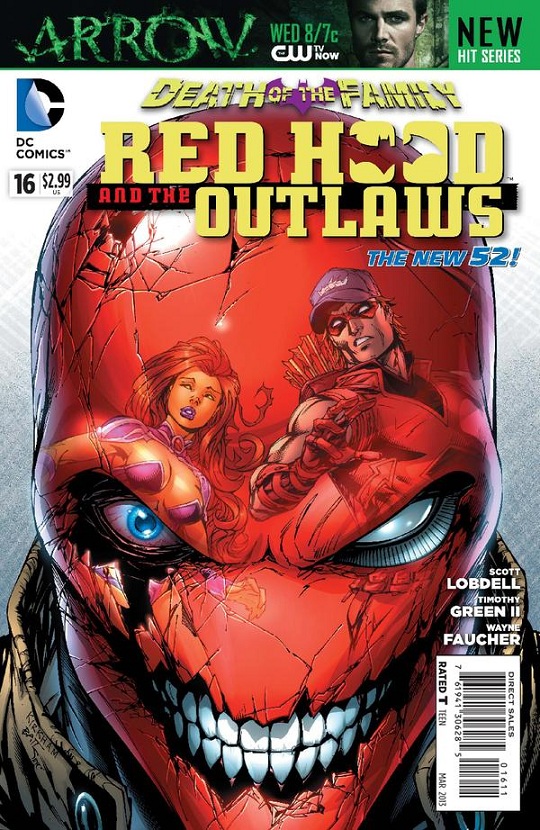 Red Hood and the Outlaws #16

It’s Wednesday, which can only mean it is time for another week of Death of the Family tie-ins over at DC.  This week, two ex-Robins vie for your dollar; the red pill of Red Hood and the Outlaws, and the once-blue pill of Nightwing.  And if you can only read one of these explicitly for the mini-event itself, Red Hood and pals may leave you more than a little cold.  But as another chapter of the title in and of itself, can it make it worth your time?  Sadly, not so much.

Picking up from the last panel of Teen Titans #15, Arsenal and Starfire have run across the Teen Titans in the midst of an overwhelming struggle against Joker-poisoned citizens as both groups seek out their respective lost Bat-related member.  Standing as the line of reason between the hopeful Titans and the efficient Starfire, command falls on the shoulders of the less-than-mature Roy Harper as he tries to figure out the best way to see all parties through to the end.  But can this self-described ‘recovering sidekick’ properly lead others when he has problems leading himself?  Also, in the DoTF tie-in arena that has everyone curious, Jason lays unconscious for two panels.

Oh RHatO, why do you mock me?  I speak so kindly to the fun adventure-book you have become from your controversial beginnings, and when I finally get to extoll the virtues of your ways, you go and have your least impressive showing in quite some time.  Now, I’m not saying this issue is horrible, as there is a fun little team-up romp with the Teen Titans, Starfire, and Arsenal; but this chapter just fails to meet expectations as either a tie-in to the DoTF event, or in continuing the ‘devil may care’ misadventures of three young belligerently distinctive personalities.  Instead, a quasi-fight scene (quasi due to the lack of actual fighting, and quasi-crowd control sounds too bland) takes up 3/4’s of the book in an effort to pivot leadership over to Arsenal after the last 15 issues have been commanded by Jason and Kori.  And while that may not be near enough to hang a tie-in on, in those efforts the book actually succeeds admirably, with the quick-cut flashbacks to insanely different (yet equally intriguing) events of Roy’s past, or the introductions of their future antagonists as people line up to take their shot at the three.  Unfortunately, it is hard to judge the current issue positively on the seeds sewn for future issues.

It goes without saying if you read the synopsis above, that this title did not need a DotF banner on the cover.  A single page, with an unconscious and silent Jason while the rest of the book hinges on the paragraph above, is more than a little misleading.  I am sure it was an effort to put more eyes on the book, but after last weeks conversation between the Joker and Red Hood, I sincerely expected this week to continue in that vein to plumb the depths of this obviously conflict-rich direction.  Whether that is being saved for a finale or not, it put this current issue in a bit of a pickle as an almost unneeded stopgap between 15 and whatever happens next.

Picking up art duties again, Timothy Green II continues his much lighter style in comparison to the scratchy Rocafort.  It plays very hit or miss in the context of the title, as it bounces back and forth between fast action and lighter comedic moments, but it is more than fitting with the brighter Teen Titans hanging around than it was last issue between the Joker and Jason.  One thing that stands out in the ‘fight-scene’ environment though, is the lack of motion in each panel.  The characters all feel very wooden in comparison to last issue, which surprisingly was much more static due to story purposes in comparison.  What Green lacked in motion though, was made up for with comedic timing/expressions in reaction to the dialogue going on in each scene.  Overall, a serviceable job done that does not harm the issue at all, but does not leap out as much as I would have hoped with this particular team-up.

Pass.  I really like this title, and am far from writing it off, but this specific issue does not have much to offer to anyone as a tie-in or a standard conflicted RHatO tale.  Those who are unstoppably curious about where Tynion looks to lead the title in the way of adversaries may want to take a look, and those looking for a silly run-of-the-mill punch-em-up that is kid-tested and Sean-approved may find some purchase here as well though.  No witty callback to end this review, just sadness that my chance to point out such a fun title corresponded with such ill timing.

Jump-On Point:  You could easily pick up and go from here, but RHatO 15 would catch you up with the main team, while Teen Titans 15 would give context to the fight at hand.