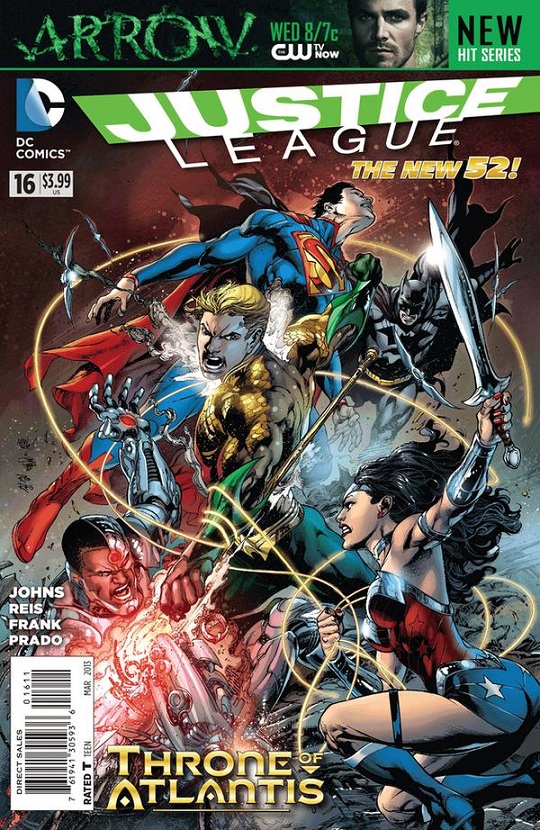 I’m an optimistic guy.  I actively look for the brighter side of most situations, and as you readers of my reviews have probably sussed out, I am willing to be a bit more forgiving than most when it comes to my comics so long as they provide the enjoyment I consume them for.  I only mention this, because I want to make it perfectly clear that my gushing last month, as well as what is to follow, is not me turning a blind eye to faults in order to seek out the positives in this current era of the Justice League.  That is not even a factor today.  So, without all the rainbows, puppies, starshine, and bubblegum; how does Justice League #16 fare?  In a word; astounding.

Last month, as Aquaman #15 came to a close, the armies of Atlantis stood just beneath the waves outside of Boston, and Arthur was left in a lurch as he struggled to decide just where his loyalties lie.  Desperately trying to convince the League to allow him to handle the situation alone, Aquaman is now caught in the middle once again, as Orm and his Atlantean armada come to blows with Superman, Batman, and Wonder Woman.  Meanwhile, in a bid to assist his friends, Cyborg goes to protect the Atlantis-targeted Dr. Shin; returning only to find his fellow heroes greatly outnumbered in the face of these underwater forces.  So as Cyborg contemplates giving up even more of his dwindling humanity to save his friends, what can he possibly do to keep them alive until he can turn the tide?  And in the backup, the Seven Deadly Sins continue to gather under Dr. Sivana, as Black Adam and Shazam meet for the first time!

Justice League was victim to a tumultuous start until as recently as the last few months.  Constantly bouncing from great read to moderate quality, it is absolutely amazing to see the consistency of stellar execution now that the title has found its sea legs (could not resist).  Filled with strong character moments for each and every member of the League, while also introducing Aquaman supporting cast and mythology in easy to digest nuggets of exposition, Johns has clearly found the voice he wants from each person while still keeping them recognizable to their core and at least tangential to their own titles; and each one of those voices is clearly a badass in his or her own right.

While I enjoyed the previous arcs to an extent, this Throne of Atlantis mini-crossover is the first time that it has felt like a team of the world’s most powerful heroes fighting against a threat of a magnitude worthy of their intervention.  Big, bombastic, and over the top with its action; there are still intriguing character moments interspersed throughout to keep the title from devolving into a testosterone-driven slugfest.  The set pieces alone in this issue provide a sense of scope that transcends any threat they have been shown to face since becoming an official team, driving them to work together like they never have before, even as one of their own struggles with his personal loyalties to both sides of the conflict.

For what feels like the first time, the Shazam backup I have been consistently enjoying was overshadowed entirely by the preceding main title.  While it was great fun to finally see Shazam and Black Adam meet, including an ending that could be the only natural conclusion to such an occasion, it was blown out of the water (blarg, too easy) by the Justice League story due to its smaller scale in comparison.  Still, an amazing backup story, and it will be very interesting to see where young Billy Batson goes from here.

Ivan Reis.  That really should cover the art portion of the review.  I sincerely enjoy Jim Lee’s work on the earlier issues, but my goodness, this Reis guy can draw like the dickens.  Extremely detailed, but just enough to pull away from too busy.  Full of motion, but far from confusing in its layout.  Emotive, yet deceivingly simple in its design.  This is the guy you want drawing your flagship title if you intend to catch the eye of uninitiated readers.  I do not want to lay all of the praise at his feet, but its more than clear that Johns and Reis have found a method that clicks between the two of them; bringing their success from Aquaman over to the League now as well.  This does nothing to sell the praiseworthy Gary Frank short on his work in the backup as well.  Consistently strong to a point of almost expectation, he has gracefully portrayed the entire emotional spectrum during the arc that Billy Batson has gone through these last few months.

I went long on the explanation, so I’ll go short on the verdict.  Buy.  Buy if you are thinking of getting into Justice League.  Buy if you bought it before and it just wasn’t your bag.  Buy if you are looking for a big action thriller full of conflict both emotional and physical; just as a tentpole title for an entire universe should be.  And just to remind you, this is not coming from a place of optimism.  I asked for Justice League to continue to deliver last month, and deliver they did.

Jump-On Point:  With the way this is being handled, I’m sure anyone could jump in at this issue and figure out what is what.  For the full story, go Justice League 15 to Aquaman 15 before reading this issue.