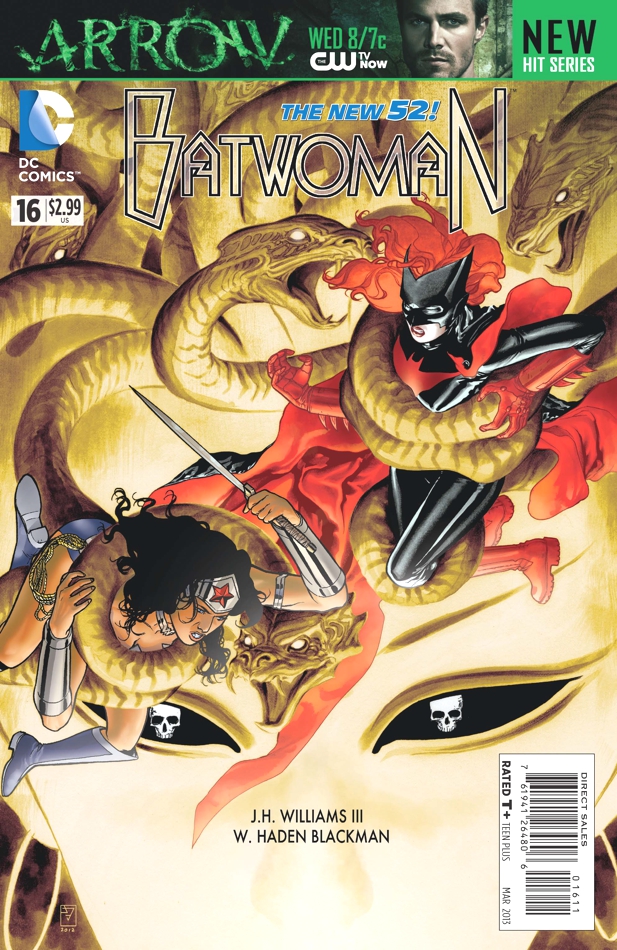 The Batwoman team has shown their readers that they can handle larger-than-life villains while balancing an emotional volatile story. Williams and Blackman blend the characters effortlessly together into one all-or-nothing story.

Wonder Woman and Batwoman are back in Gotham facing down Medusa and her team of Greek monsters and local villains. The two heroes look upon the wreckage and have different reactions: Batwoman panics at seeing her home being destroyed, and Wonder Woman harnesses her guilt into rage. While there is not a hard and fast rule that Wonder Woman must fight in all Greek-related conflicts, it’s easy to see that she feels personally responsible for the situation Gotham is in now.

Medusa is clearly the mastermind of the events in Gotham. The collection of children by Maria (the weeping woman) will be used to bring her mother Ceto to this world. Williams beautifully illustrates the story of Ceto, juxtaposing it with the uncertainty of the children’s lives. To insure she can successfully bring her mother to life without interruptions, Medusa calls upon the hydra, a multi-headed beast, to level the city. The dynamic between Wonder Woman and Batwoman shines as they decide how to handle the hydra. Without insult, Diana tasks Kate with hunting down Medusa as she works to kill the hydra.

Rarely do you find a female duo like Wonder Woman and Batwoman. Their evolution from quiet worship to a comfortable team is smooth. As the women become accustomed to working together, they quickly learn each other’s strengths and resources. There’s no doubt that Wonder Woman and Batwoman make a fantastic team. Let’s hope we get to see more of these two in the near future.

Though it’s in the middle of a complicated and involved story, Batwoman #16 is an enjoyable read for any Wonder Woman or Batwoman fan (or any comic book fan, for that matter). For those invested in the series, buy it just for Bette’s appearance. Her part in this story will likely be an inspiration to both Diana and Kate.