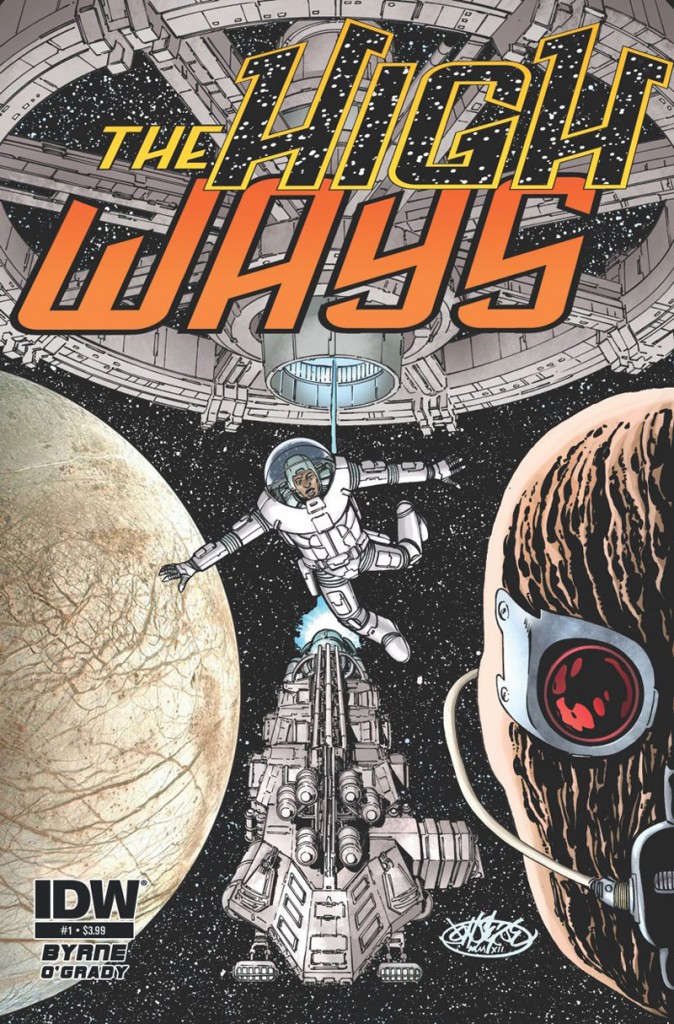 Behind a cover resembling a movie one-sheet from some unknown outer space epic, The High Ways, John Byrne’s newest series from IDW, features elements familiar to devotees of Science-Fiction classics such as “Solaris”, “Silent Running”, or “Alien” but are here-in combined to form the backdrop to a growing set of mysteries.

We’re introduced to rookie navigator Eddie Wallace, who’s brought aboard the freighter “Carol Ann” by veteran space jockey Marilyn Jones. Their mission to Mars is swapped out at the last minute by the rather cranky Captain Jack Cagney, and replaced with an 8-month haul to Europa, Jupiter’s icy moon. When the “Carol Ann” and her crew arrive there to pick up their shipment for delivery, they discover that no shipping order was sent, and receive a luke-warm reception from the inhabitants of the base, particularly Chief Scientist Dr. Munoz, whose long-running experiments might be jeopardized by these unwanted visitors.

Writer/artist John Byrne manages within the space of mere panels to give of these new characters distinct and vibrant personalities, either through actions or words, but sometimes with only  body language or their placement within the panel, as in a charming bit where Eddie and “Jonesy” get suited up for their voyage. The design work on the ships and stations brings you into a “real” fantastic world, as they all seem to have the “lived-in” look of actual working environments, and the colors by Leonard O’Grady add a richness and scope to the settings, and an almost 3-D quality to the space-set scenes.

The High Ways looks as if it will be a gem of many facets, as much groundwork was set down in this issue, but never at the expense of an entertaining first chapter, and the bits of fore-shadowing hint at some potentially dire events on the horizon—as witnessed in the cliffhanger!

VERDICT:  If you’re a fan of literary Science-Fiction, or the more straightforward Sci-Fi films listed above, then The High Ways is right up your alley, and is a Must Buy; but there is a mystery/horror component to this story, too, so if you’re looking for a respite from the “capes & cowls”, and have enjoyed titles such as Saga or The Massive, I would suggest that trying out an issue of John Byrne’s latest work would be well worth your time and money also.

Soundtrack:  This review was written whilst listening to the 1958 album Come Fly With Me by Frank Sinatra, which features a great mix of ballads and swinging pieces, all tied to the theme of “Places’; i.e. “April in Paris”. “Autumn in New York”, and certainly one of my favorites, “Let’s Get Away From It All”.  rrr