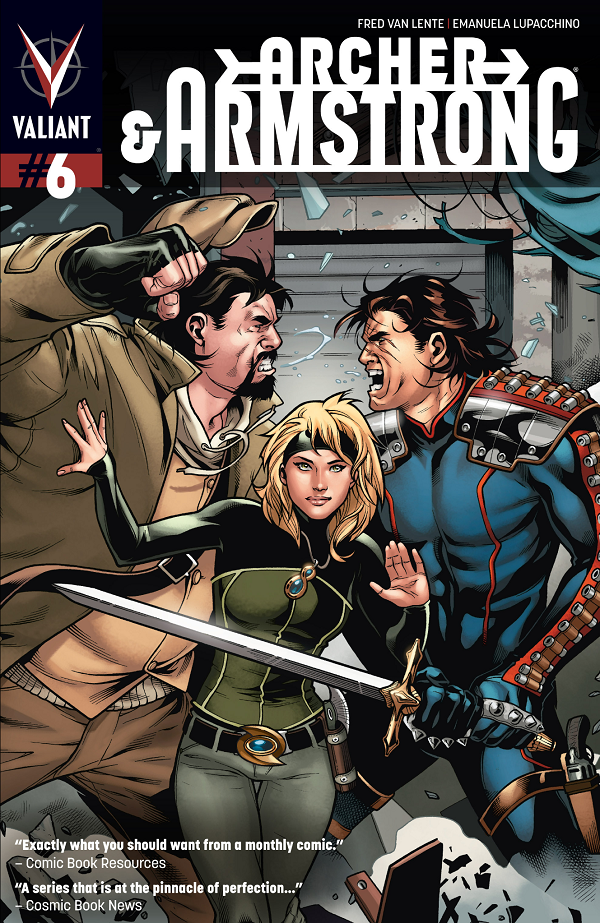 When I first saw the title Archer & Armstrong it immediately brought images of a buddy cop movie to my mind. Two cops with ultimately different styles of enforcement paired to achieve the same goal. Archer and his partner Armstrong are in no way officers of the law, but their adventures definitely contain those odd-couple/buddy-cop elements.

In Issue #6 we don’t get too much time with Archer or Armstrong, and the story isn’t moved ahead very much. This isn’t a particularly bad thing though. The stories progresses laterally and Van Lente uses this issue to give us another glimpse into the history of the Eternal Warrior (Gilad, Armstrong’s brother) and also introduces the new Geomancer (badass sorcerer that talks with the Earth).

Van Lente’s dialog and narration are entertaining as they have been all series. In the past he has worked on Amazing Spider-Man, so I’m really not surprised that he is a talented writer of witty banter. Van Lente also gives us an interesting look in to the life of Kay McHenry. She is not the kind of person you would expect to be an all-powerful sorceress, but I feel that is what will make this character work. Archer & Armstrong is all about odd pairings. It is what keeps the tone of the book light and humorous on top of a pretty heavy and engaging story.

By the end of the issue it looks like we may have two new characters joining up as support cast for the near future. While this is the second Valiant book in two weeks to feature a talking monkey, I’m not sure if we are going to see this one again. It would be a shame if we didn’t. One can never have too many talking monkeys. Either way, it is nice to see the cast of the book growing.

Lupachino and the art team on Archer & Armstrong also do a stellar job. There isn’t really a bad art team working at Valiant right now, but Lupachino and Co. are at the top of my favorites.

If you have been enjoying the series so far then this is a BUY! New readers, you could pick up this book and have a good read, but you aren’t going to get the full feel of Archer & Armstrong with the two main characters out for most of the issue. You just have to decide if you want to jump in feet first, pick up a few back issues, or wait until the next arc starts. Whichever way you decide, you’ll probably end up reading this and the other issues at some point.

My caveat
I’d like to quickly point out that this is the fourth Valiant book in two weeks that I have reviewed here at Talking Comics. I have enjoyed all that I’ve read so far, and it is very easy to say “BUY IT!” everytime. Valiant’s recap pages do a fantastic job at bringing you up to speed, so new readers can always jump in if they so choose.