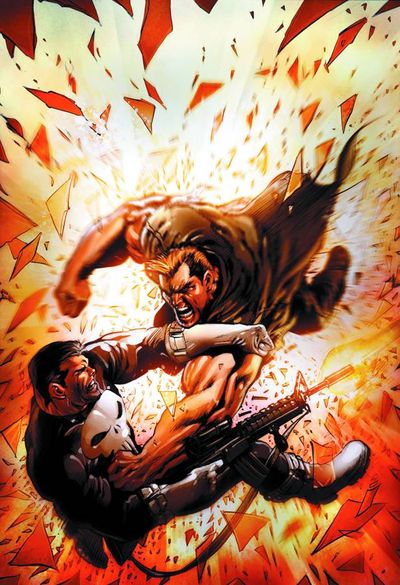 Jake has been shot in the head. Punisher is now after the man who shot him: his former friend and squadmate Josh Dubose. The problem is, while Jake is dead, Johnny Nightmare is still alive and now he’s stronger than ever. With the speed of Spider-Man, the strength of a Hulk and a mind as crazy as it is deadly, Punisher may have more to worry about than a couple of thugs and a sniper.

Gimple really picks up the story in this issue and it works wonders for the book as a whole. While the inner monologue that has been at the forefront of the book is still there, now it shifts between multiple characters at a rapid pace and really speeds up the book. It works well when you factor in all of the flashbacks (this time taking Frank back to Civil War time) and simultaneous scenes (understanding Dubose’s motive, Jack’s transition to Johnny) and all the action that is happening in the book. It still gets a bit heavy sometimes and can be a lot to swallow, but Gimple’s writing continues to be great and I can’t wait to see how this thing ends up.

Texeira’s art continues to fit perfectly with this series, and it’s especially cool that we get to see him handle more heroes than just Punisher. His work with Frank D’Armata, the man who handles the coloring, really makes things pop in the book, with blacks, reds and yellows really jumping off the page. Texeira’s hyper-realistic style really grounds the book, even with a plethora of heroes on the page, and makes the book feel like it could really happen. Sometimes faces can look a little off, and even three issues in I’m still not entirely sold on Punisher’s look, but overall Texeira continues to do a great job with this miniseries.

Punisher: Nightmare continues to be an incredibly intriguing read, especially now that Jake has shown his true colors as Johnny Nightmare. The action is more intense, the inner monologue is better handled (or at least there’s more diversity in who’s talking) and we’re finally getting to the core of who’s what and why. If you’ve been reading so far I see no reason to stop. If you haven’t, you’re going to be in for a treat when this is collected in trade. Definitely worth a read though.