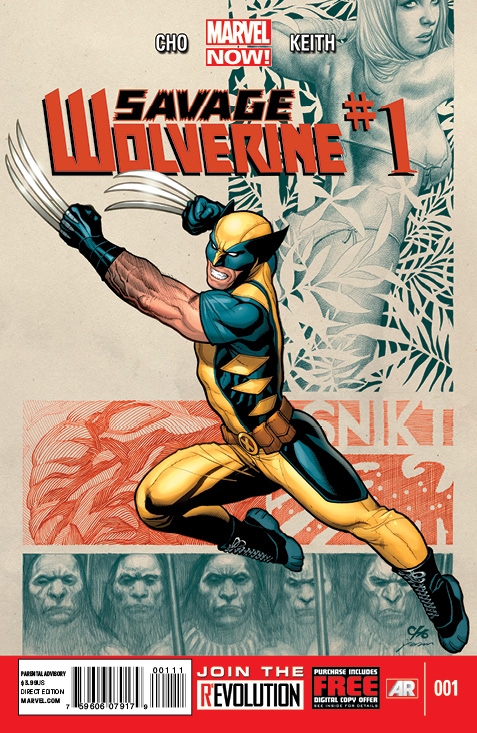 Story and Art by Frank Cho

On the very first page of Frank Cho’s Savage Wolverine #1 I rolled my eyes so far back I almost saw the inside of my brain. There, right in front of my eyes, was a group of male S.H.E.I.L.D. agents, adorned head to toe in their usual garb, and along with them a busty female character (Shanna the She-Devil) literally wearing a bikini.  I wasn’t familiar with the character in question, and after a bit of research I came to realize it was her usual attire, but it just rang so false and exploitive, that I nearly gave up on the book right there.

Well, it just goes to show you that sometimes political correctness, and being oversensitive about surface depictions, can do you a disservice. Because as I continued to read Savage Wolverine I began to fall in love with the pulpy nature of both its narrative, and character depictions.  Yes, Shanna does wear very revealing clothing, but she is also a fierce warrior with an overpowering intellect, and it’s those characteristics I was left thinking about after the issue was finished.

So, other than a sexy female lead, what is Savage Wolverine? At its core it’s a hard boiled detective story starring our titular hero. The premise of the book is simple, Wolverine wakes up in the Savage Land, with no idea how he got there and he then endeavors to find a way out of his predicament. It’s this circumstance that unites him with Shanna and together they go on a hunt for their freedom.

There is a lot of blood and dismemberment, of dinosaurs and humans alike, in Savage Wolverine, but it’s depicted so interestingly that it never feels gratuitous or dark.  Perhaps that’s because Cho’s writing of Logan feels pretty much flawless.  In his hands the character is a charming mix of gruff, tender, tactical and ferocious, and this is all communicated by a fantastic inner monologue running throughout the entire book. Cho has brought a bit of Sam Spade to his Logan and it’s a perfect fit.

Shanna is voluptuous and scantily clad, and there is one specific occasion where most of her more appealing physical attributes are on full display. There is certainly a way to construe this as chauvinistic or exploitive, and in a sense it is, because we don’t see Logan in the same revealing spreads. However, the visual representation is only one aspect of her character, and to get the full picture you need to delve more fully into the story.

Shanna is no floozie or mere sex object, no, in fact she is a complicated woman and a vicious warrior. One who is capable of getting the jump on Wolverine one moment, and in the next lamenting the fact she hasn’t seen her beau or, more importantly, her cat in months. She fascinated me as a person and as a refreshing twist on the femme fatale. She’s not Carol Danvers by any stretch, but I found her beguiling none the less.

I had trepidations about picking up Savage Wolverine, as I am becoming tired of the deluge of X-Men titles out there. But to call this just another X-book would be to do it a disservice, because it is succeeds in being something wholly stand alone from the interconnected web of mutant drama happening in the Marvel universe. I mean Logan is literally stranded on an island!

Now, you may question, fairly I may add, just how the clawed wonder has time for this little outing. After all isn’t he the headmaster of a school, a card carrying member of The Avengers and a hero who constantly goes on his own solo adventures? However, if you can suspend a little disbelief, I guarantee you will dig what Savage Wolverine has to offer.

Buy it – By being a standalone comic that is a blast to read Frank Cho’s Savage Wolverine #1 rises above the din created by the gaggle of X- Men books.  Its pulp sensibilities, interesting characters and gorgeous art make this title one every fan of Logan should be picking up.