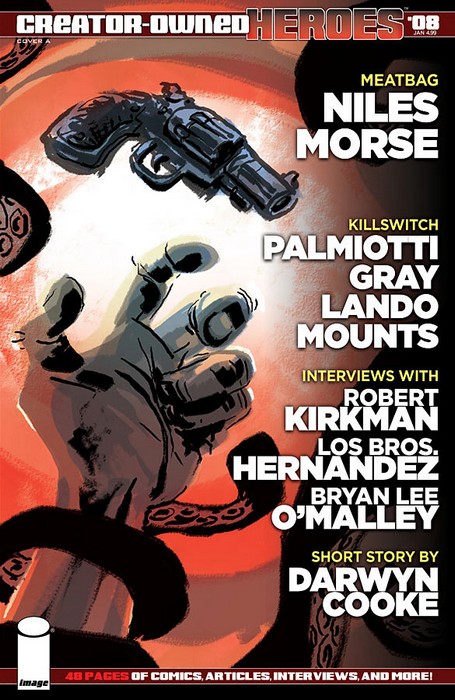 Issue #8 begins with part 2 of Meatbag, a noir detective story by Scott Morse and Steve Niles. It’s a dark, narrative thick tale of betrayal, murder and love. And maybe a few slimy appendages. Definitely took a weird turn at the conclusion, which I appreciated, as the straight and narrow detective story doesn’t do it for me. I shouldn’t have assumed that Niles would go that route, he’s not known for doing anything expected in his craft. Darwyn Cook shares with readers a very personal short story,  born of his relationship with his wife. Killswitch wraps up with the exposure of Traci, the ex-partner in crime who put a network wide hit out on Brandon, star assassin of the story. The ending felt rushed to me, like as of Issue #7 there was much more story waiting to be told but it needed to be finalized before it’s time. Unfortunately, this entire series is ending before it’s time, as Issue #8 will be the final publication of Creator-Owned Heroes.

Leaping Tall Buildings is an interesting series of interviews, featured in Creator-Owned Heroes is Robert Kirkman (Walking Dead), Los Bros. Hernandez (Love and Rockets) and Bryan Lee O’Malley (Scott Pilgrim). It’s a piece that focuses on creator’s experiences in independent work, how they got there, what challenges they faced along the way and how they feel about the levels of success they’ve found in creator owned publishing.

Creator-Owned Heroes has been an experiment in a new way of delivering comic book material. It’s offered not only great stories, fantastic art and respected names on the roster, but also a large amount of knowledge, experience, inspiration and technical insights to budding artists and writers looking for some guidance. It displayed this wealth of material in a clean, magazine-like format, and gave readers more goods than they’ve probably ever gotten in a single issue before. Although this is the last issue of Creator-Owned Heroes, I hope it has set an example of what can be done in the comics industry when creative minds work together to make something bigger and better and do it in a way that supports the creators rather than a corporate piggy bank.

Verdict: Buy this. Have all 8 issues in your collection. Although I hope it’s not the case, a publication like this one may not be done again and whether you’re a reader, an artist, a writer or an editor, Creator-Owned Heroes will forever have value as a manual of sorts for finding success and satisfaction as an independent in the comics industry.