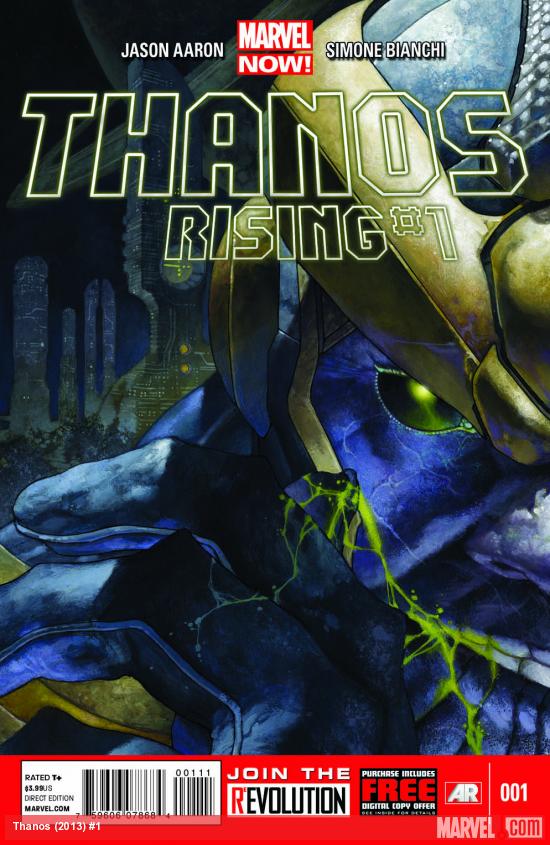 Last week it was announced that Jason Aaron and Simone Bianchi would be working on a title together, with the teaser word being “Birth.” Many had believed, due to the color of the word as well as the word itself, that the title had to do with Galactus or Thanos. As it turns out, the people who thought it was the latter were right. Starting this April, Jason Aaron and Simone Bianchi will be exploring the origin of Thanos with the limited series “Thanos Rising.” Marvel’s website sat down with the Aaron and asked him why he decided to tackle the infamous villain.

“The chance to do as dark and creepy a story as I’ve ever done for Marvel. This is not a super hero story. There are no good guys swooping in to save the day here. This is the origin story of a very bad dude. A cosmic mass murderer.”

When asked what kind of story to expect from “Thanos Rising,” as well as whether or not we’ll see any familiar faces from the Marvel Universe, Aaron had this to say.

“We start at the very beginning, with the day Thanos is born. And things start to get weird right from the get-go. We’ll see Thanos’ family, including Mentor, his dad, and Sui-San, his mom, and we’ll some new characters that Thanos meets during his formative years. Some good influences. Others not so much. [Titan] was a sci-fi paradise when Thanos was born. A place without weapons, without the idea of murder. But that all began to change…”

But what about the already established canon? Many writers over the years have tackled Thanos’s origin, and Aaron plans on incorporating all of that while adding his own spin to the character’s beginnings.

“Jim Starlin of course had already laid down a lot of the pieces of Thanos’ origin, but they were spread out in several different stories written over the course of several years. Thanos Rising combines all those pieces and also fills in a lot of the cracks. I think it’s true to Starlin’s original ideas for the character, while also expanding on some aspects of the origin, and playing around a bit with the dark romance part of the character’s history.”

One of the things many might wonder though is why we would need a Thanos origin book. Aaron knows that people will ask this question and he plans on really getting to the heart of the character and potentially exploring new facets of his life that we may not have seen before.

“…that’s really the main question of the book. Who is Thanos? When the book starts, even Thanos doesn’t know the answer to that question. It’s the pursuit of that answer that begins to take him to some very dark places.”

When asked what it was like to work with Bianchi, Aaron had plenty of glowing things to say about him.

“Simone is a dynamic artist who kicks ass on both the book’s sci-fi setting and its creepy overtones of horror. I think he’ll define the look of Thanos for the 21st century.”

“Thanos Rising” #1 will be released in April.