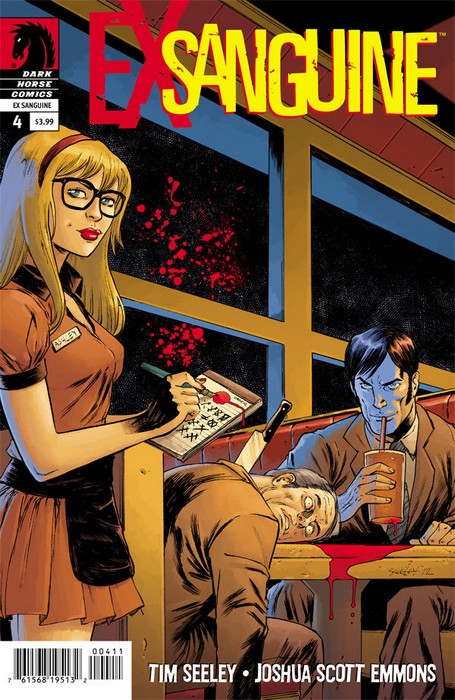 Tim Seeley’s bloody love story/murder mystery is off to a pretty good start. In the beginning, it seemed it might just be a good excuse to build a romance in a horror story, which I’m in no way opposed to, but I was suspicious of the plot possibilities. The story has grown nicely, layering the love/hate relationship between serial killer and vampire with an FBI agent’s dark past and the even a new monster thrown in for good measure.

Issue 4 continues to tangle the mystery of a series of murders that have caught the attention of the FBI; one agent feels a very personal investment in the case. The  more committed she becomes to solving the case, the looser her brain screws seem to get. Saul the vampire is now drawn to figuring out his love interest’s real motives not only to satisfy his curiosity, but now to cover his own ass. As the plot thickens, Saul is being blamed for the murders and Ashley, his serial killer lover, is becoming less cooperative, more driven to leave her mark on the world.

Mostly, I’m enjoying this series and appreciate that the story is moving along quickly. It sometimes feels a little sloppy, like the point of some scenes could have been cleaner and with less chatty dialogue. What I mean is, at times it feels like the book is being ‘filled’. Something about the look of Saul in his vamp form looks overdrawn, like a bear trap jammed in his mouth. But I’m reaching for criticisms here.

Verdict: Read it digitally. Ex Sanguine is a decent, scary story with a not-too-cheesy relationship between death dealers. It’s not my favorite book to read right now, but if you’ve got the time and want to add some more to your reading stack, this book is worth checking out.