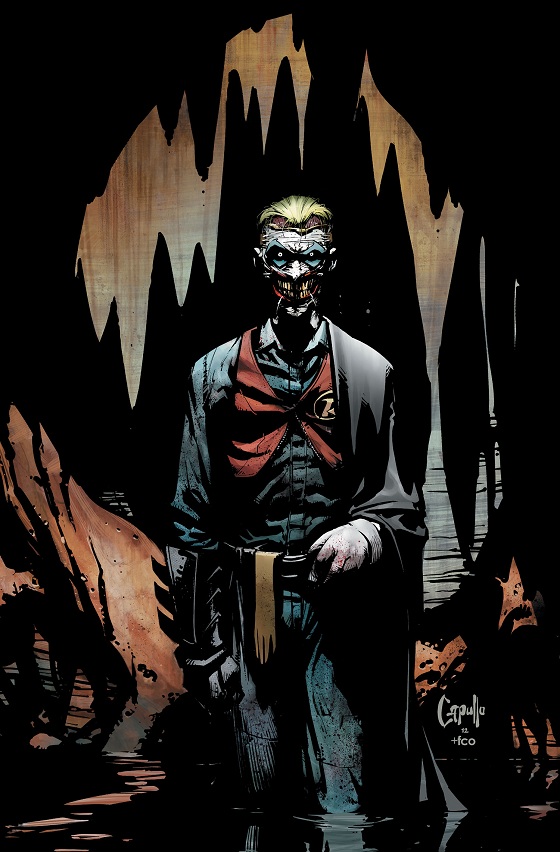 I’ve stated before that Scott Snyder’s Joker has an effect on me. He makes me physically tense. I can’t say that that has ever happened before, but I love it. Death of the Family has brought Joker back as an agent of pure horror, and it culminates in Batman #16.

We pick up right after Batman #15 as Batman enters Arkham, and from here anything you were expecting is thrown out of the window. Snyder and company take you through the mind of a mad man as Batman walks the halls of the asylum trying desperately to get to Joker, but each and every step of the way he is confronted by the next present left for him.

Some of these gifts are so chilling that you really have to take a minute to process just what you’re seeing. Greg Capullo and FCO Plascencia are at the top of their game in this regard too—especially in the work done with the shadows, and what comes from them. Capullo has been a workhorse on this series and he may just give his best performance yet with this issue. Bruce’s steely eyed determination is depicted perfectly. This is almost in direct contrast to the Court of the Owls, where you see his psyche begin to break; here you see a focused, driven Batman with just one goal on his mind and it’s all done through the eyes. Batman actually says very little in this issue, but through the stellar work by Capullo it is never in doubt.

More than the main plot of Batman working his way through the trial before him, Batman #16 gives us a deeper look into the relationship between the rogues and Batman, and, what ends up being more interesting, the rogues amongst each other. Each of the more popular villains are featured, but you see who is thrown out as fodder and who remains among the court.

The main story in Death of the Family has been masterful, but Tynion’s backups have been  just as phenomenal. He and Snyder are ridiculously twisted individuals (it would seem), but they have such a finely tuned handle on the Joker that it makes for seamless transition from one story to the other. This back up is one of my favorites of the whole series as Mr. J proceeds to prove each and every member of Batman’s A-list rogues utterly insignificant when compared to him. He’s cold, callus, and (almost surprisingly) down-right genius. Much like he knows the chords to pluck to get at the core of Batman, he knows how dig deep into the hearts of his fellow evil doers.

Jock’s work continues to be flawless, also. Joker looks demented under his pencil, and the sheer hell Two-Face is put through actually makes you feel sorry for a murdering psychopath. Penguin and Riddler are featured yet again, as it does directly follow the events of Snyder’s main story, but nothing they endure matches Harvey’s time in Joker’s spotlight.

I don’t know how to put it any more clearly than this: Everyone should be reading this. This is the Joker in an all too familiar light, but at the same time so far from what I am used to that it feels brand new. Team Batman seems to be synched right now, and they are sitting on their comics throne just waiting for everyone to try and catch up to them. This is a must buy.