It’s a dark day, folks, both figuratively and literally (it’s ridiculously cloudy out right now). I like to think that the powers that be knew this would be a sad day, and made the weather fittingly. Why am I so down? Well, if you read the sight, you know that one of my “Top 10” books of last year was canceled today. How will I ever get over this to bring you the usual dose of wit and charm that you have become accustomed to? What? Batman comes out this week? I’m back folks! Let’s buy some comic books! 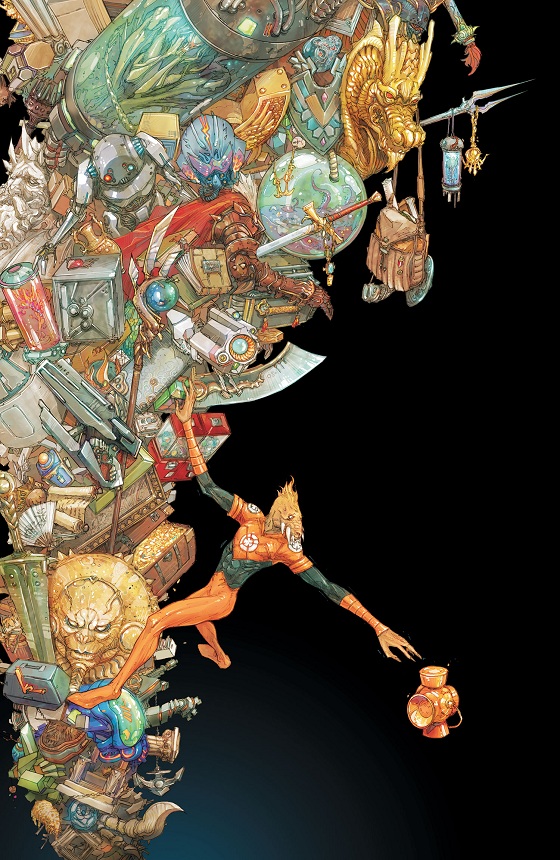 New comics, yay! DC’s going through a whirlwind here lately, but at least there are some new series coming out of it. Threshold is a book that looks to build DC’s cosmic universe. Following the events of the Green Lantern: New Guardians Annual, Jediah Caul is has been stripped of his power ring, and is on the run from people trying to hunt him. Oh! And it’s being televised. Lots of things hunting other things as a reality show lately…Anyway, Keith Giffen  and Tom Ramey bring you the main story, but it is the back up in this book that caught my attention. Larfleeze has been robbed of his hoarded bunch of goodness. I will read anything with Larfleeze, so count me in. The only better Lantern, in any corp, is Ch’p, and he’s still dead. I think. 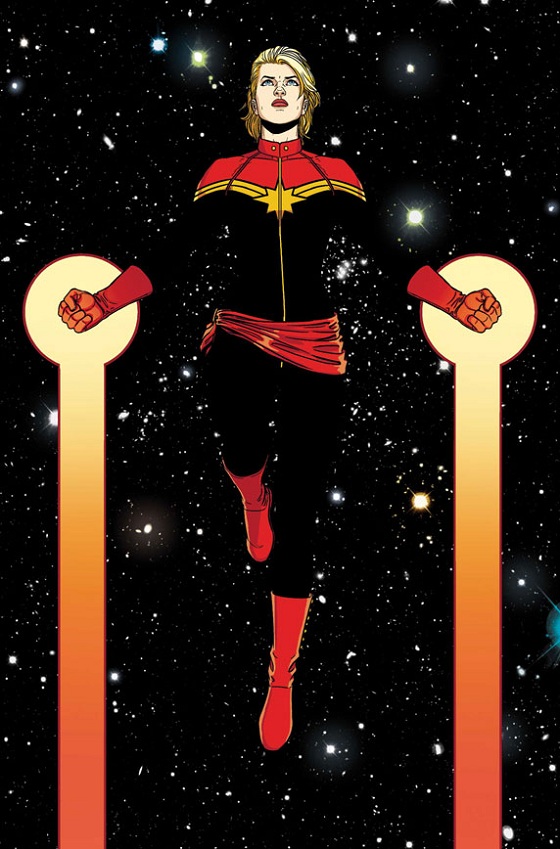 Recommended by Joey and Mara

Kelly Sue DeConnick has been holding the fort down here lately on Presents. Her hubby, Matt Fraction, has lost his touch apparently, as his streak of being on every Presents ever came to an end a few weeks back. Fear not Fraction family, you’re still represented. Filipe Andrade joins Lady Fraction in the latest Carol Danvers adventure. In doing so he will be the third artist on a book that is only 9 issues old, but each one has done great things when on the book. This month Carol fights dinosaurs. Pretty sure that’s all I need to say. 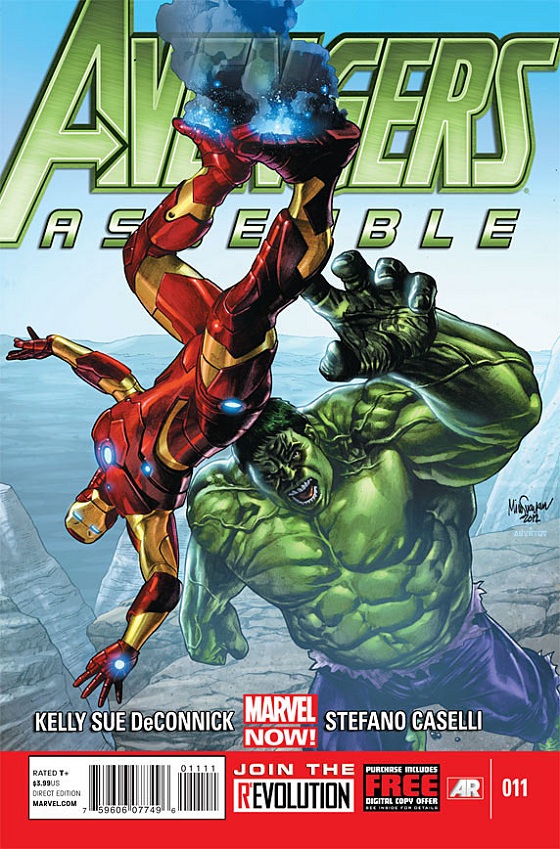 Hey, it’s that lady again! I’m starting to believe Kelly Sue just might be a decent writer. DeConnick and Stefano Caselli continue to bring you the Avengers in a more humorous light than the group you will see in Hickman’s run, but stuffs starting to get real in Assemble. Most notably, Hulk has some mind control parasites making life difficult for Spider-Woman. I blame the sandwiches (probably didn’t wash his hands). How will the Avengers stop all this comic-booky craziness? Not my place to say, that’s why you read. 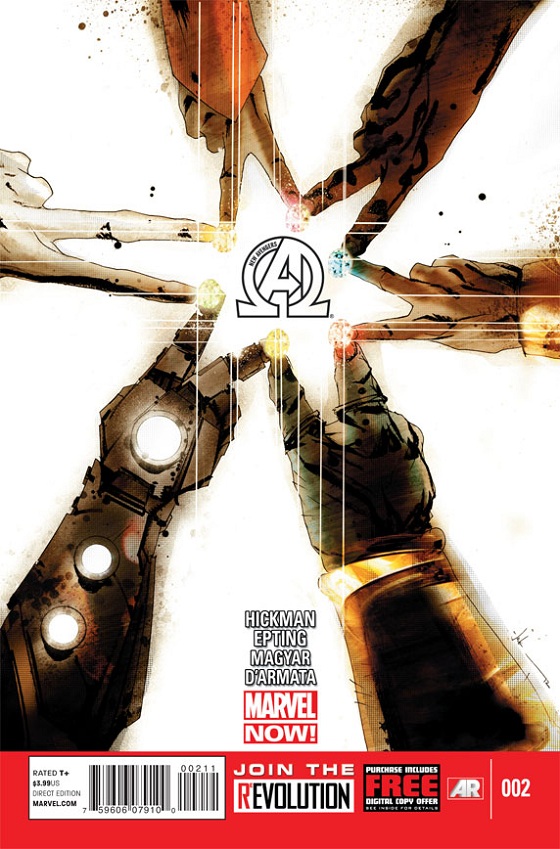 How do you make that thing that teenage girls do with their hands to make them form as star cool? You get Jock to draw it, and put it on a cover of a kick-ass comic book—that’s how. Jonathan Hickman has yet to disappoint in his takeover of the Avengers titles. New Avengers #2 shows what happens when the Illuminati really want something. They get it, and will do so by any means necessary. Black Panther was in desperate need of a lead role, and he has finally got one, but it looks like the powers that be are going to try their best to make this a short run for him. 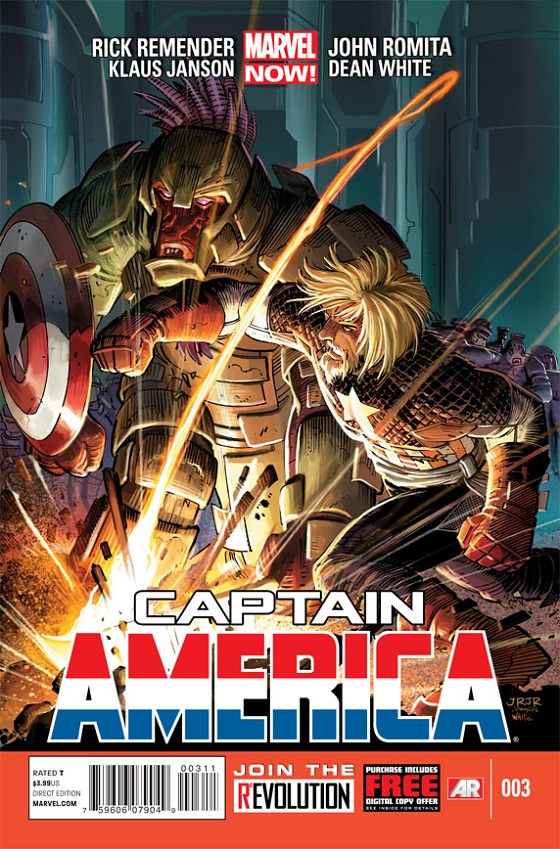 Bob has given [part of] the new Cap series his full blessing! Rejoice in the streets! Rick Remender has started to make his mark on Steve Rodgers as much as he has Cap, and it is the best part about the book so far. You are getting history from a Captain America title, as you are used to, but this time it is coming in the form of just one man. Rodgers’ past is what is making this a standout title in Marvel NOW!’s lineup, and that doesn’t look to slow down any time soon. Remender and John Romita Jr. have really surprised me with their ability to follow such an iconic run in Brubaker’s epic, but they have done so and really been able to make it feel like something completely new. 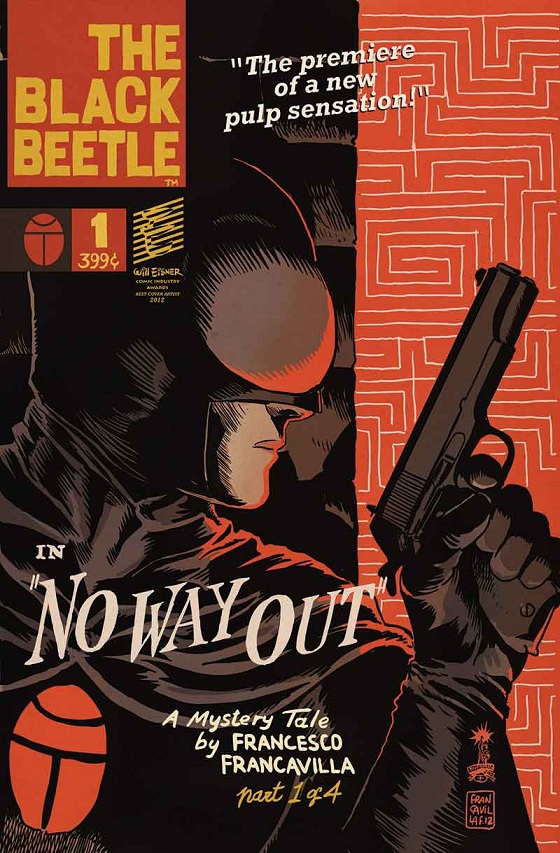 Recommended by yours truly (unless you don’t like it, then it was totally Steve)

Since when did DC give up the rights to Blue Beetle? Different character entirely, you say? Well, nix that then. Dark Horse is looking to continue its run here recently of under the radar gems. Black Beetle is written and drawn by Francesco Francavilla (Swamp Thing, Detective Comics, etc.). It’s a pulpy, noir book that follows a man’s pursuit of crime lords and corruption. Only this investigation gets off to an explosive start. If you are interested and want more backstory, the #0 issue came out not too long ago. Check this new title out, and let me know what you think.

Recommended by Bob and Joey

So begins a new chapter in the X-Factor  series as the “Hell on Earth War” begins this week. Peter David has been planning this for some time, as we reported way back in NYCC news, and he promises that this is a pretty large story. The earth sees its seven billionth person born, and Hell comes with it. The X-Factor crew has to deal with the world threatening baddies, as the fate of life as they know it hangs in the balance. David also promised that this will be a turning point in the series as its effects will change the status quo of the group.

A Chat by the Fire:

“I’ve saved my most anticipated book of the week for myself this time around and it’s Batgirl #16. “Last month in Batgirl, Barbara had reluctantly left hostages behind, in order to give herself a chance at overcoming the Joker’s diabolical plans…”

(Robert, why are you trying to sound as if you’re Orson Welles, or some sort of old-time radio announcer? Have you been drinking again? Audrey)

Audrey, with last issue ending on a really scary cliff-hanger, I though it only fitting to adopt the manner of radio men such as Pierre Andre or Bill Kennedy. (Well, that explains everything…as if anybody but you knows who those people are! I’m sorry, darlings, but sometimes Robert forgets how old he is. Audrey)

As I was saying, Batgirl #15 ended with Barbara in dire straits, and the prospect of having to use all her mental and physical skills to escape a horrible fate at the hands of the Clown Prince of Crime. Sadly, issue #16 will mark the end of Gail Simone’s run on Batgirl. and after two fill-in issues by (my fingers so wanted to type “Guy Fawkes”!) Ray Fawkes, she is being replaced by someone named Gail Simone, who I’m sure will not be half the writer that Gail Simone is, so perhaps I’ll drop this book and buy instead whatever comic Gail Simone will be writing next, just to send a message!

(All right, dear..come along now, and have a glass of warm milk. Darlings, I will try and have Robert straightened out for next time. Audrey)”

In the time since I started this article I lost two of my favorite books, I, Vampire and Superman Family Adventures. I’m going to go cry now. See you guys next week (as long as Batman doesn’t get cancelled!). Let us know what you think in the comments below and on Twitter, @talkingcomics.

Taylor Swift breakup song sing-a-long in the Short house this evening! It seemed to fit the mood–so much pain in such a pretty little lady. I feel you Taylor. I feel you.