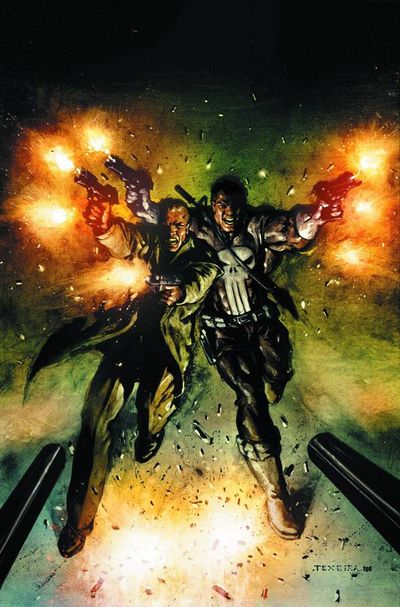 After last week’s explosive and disturbing introduction to Jake Niman/Johnny Nightmare, Punisher: Nightmare #2 looks to show what happens when Frank meets Jake and they go on a little bit of a hunting trip.

Jake is recovering from his wounds he suffered during the first issue when Frank confronts him and sees if he wants to help find the people that did this to him and his family. Jake agrees of course, partially due to his inner dark side Johnny Nightmare, but mostly because he wants revenge. All the while we get more information of Jake’s time in Afghanistan and his fight with his inner demon.

Scott Gimple continues to write a really interesting, dialogue heavy look into the human psyche that I can’t seem to put down. The wordy nature of the book can be a little draining at times like the previous issue, especially given the “wait” tactic used heavily throughout this issue, but it’s still a great read and I’m intrigued by the twist at the end of this issue and what it means for the future of this miniseries.

Mark Texeira’s art continues to be a major highlight of the book, especially in this issue. The present day scenes are dark, bloody, gritty and full of heavy blacks, browns and reds that work well with the more action packed nature of this issue. The flashback scenes are faded, yellowed and grimy like the previous issue and really give a stark difference in feel to the present day scenes. The panel transition during the flashbacks and action scenes flows perfectly together and everything has a great controlled hectic feel to it. Faces still look realistic and detailed and it seems like the Punisher is drawn a little more subtlety than the previous issue. The suit still looks a little wonky but he is decidedly smaller than before.

Punisher: Nightmare is evolving into a very intriguing series. The character of Jake/Johnny Nightmare is continuing to grow into a great hero/villain and to see him interact with the Punisher is great. Given the ending of this issue, I’m extremely excited to see what happens when we reach the halfway point in the next issue.  The book is still a little too wordy for its own good and the “wait” mechanic can get a little tiring, but Punisher: Nightmare continues to be a miniseries that most Punisher fans will hopefully enjoy.