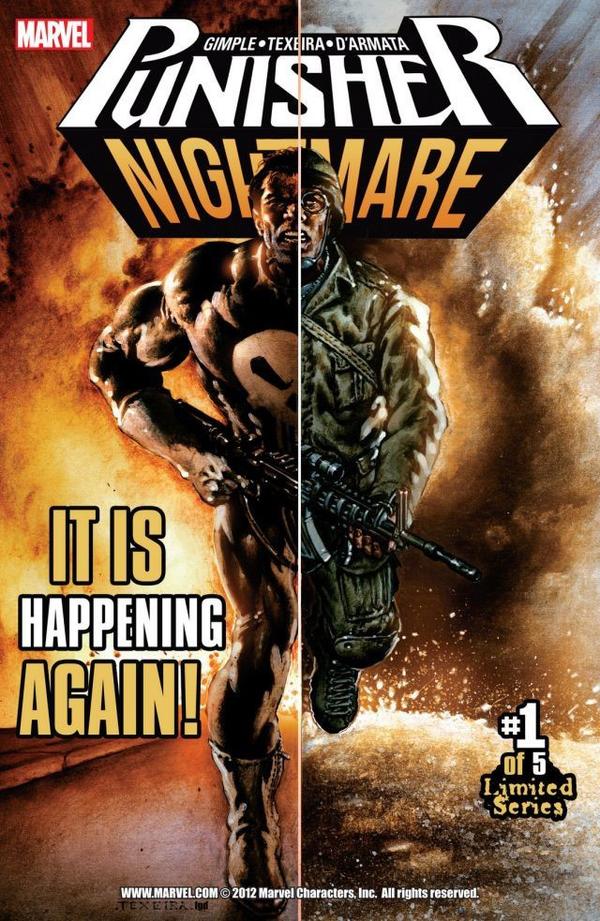 The Punisher has had a long and storied career with Marvel comics, the most recent being the fantastic run written by Greg Rucka. Since Rucka’s series ended we’ve been lucky enough to get two fantastic miniseries, War Zone and Space Punisher, and now we’re primed to get another with the five week series Punisher: Nightmare. On the reigns is Walking Dead writer (and now showrunner) Scott Gimple with Mark Texeira (a veteran of Frank Castle) doing the art.

Jake Niman returns from Afghanistan after a long career in the military. A few days after he returned home, his wife and daughter decided to go to Central Park for some ice cream. When they get to the ice cream stand, they’re caught in the crossfire of a mob hit and Jake’s wife and daughter are murdered with Jake left in critical condition. During this time we learn that Jake has a dark and violent side (that stems from PTSD) and that’s what got him out of the military. All the while the Punisher seeks vengeance on those who gunned down Jake’s family.

Punisher: Nightmare is a meaty, wordy book. To sit down and read this properly it’ll take some time. In a way I appreciate what Gimple is doing, especially as someone who really enjoys a lengthy read, but sometimes it can get bogged down by details or unnecessary exposition. The scenes with Jake/Johnny Nightmare are fantastic and really delve into the human psyche, but the scenes with the Punisher can fall a little flat, especially when you compare it to Rucka’s series. It is a story I want to see play out though and I’m intrigued to see how Frank and Jake interact with each other.

The art by Mark Texeira is dark, gritty and beautiful in its own dark sort of way. The colors are faded, yellowed and grimy and it especially works well during Jake’s flashback scenes. In the present scenes, browns and blacks are even more prevalent, really setting the tone for the series well. Backgrounds have a nice watercolor feel to them and characters are realistic and incredibly detailed. My only complaint would have to be Punisher’s outfit, as it reeks of 90s pocket fever, which is something I can never get behind. Also Frank sometimes looks too big for his own good. But overall fantastic artwork from Texeira.

Punisher: Nightmare #1 is a good start to a potentially great series. Gimple has created a world and a scenario that’s interesting for Frank Castle and I’m interested to see how everything plays out. It may be a little too lengthy for its own good sometimes, but the overall product ends up being a good read. Mark Texeira’s artwork is dark, gritty and fantastic on every level. Some aesthetic choices do rub me the wrong way, but the end result is still beautiful art. Fans of Punisher will no doubt enjoy this book.