In the past week or so, Marvel has released a plethora of teasers for their ongoing series, along with two new one word teasers: “XX” and “Birth.” Each of the ongoing teasers continue the one-word trend (although some use two), but instead of teasing the series, they’re teasing the direction of the upcoming arc. Each of the teasers, save for Avengers Arena, also announce a new artist coming on to the series. Whether it’s a permanent change or to work on rotation (to make sure the artists don’t miss their deadlines and to give them some breathing room) is unknown at this point, but it’ll definitely be interesting to see what the future holds for these series.

First up is the one that doesn’t have any changes coming to it, Avengers Arena: 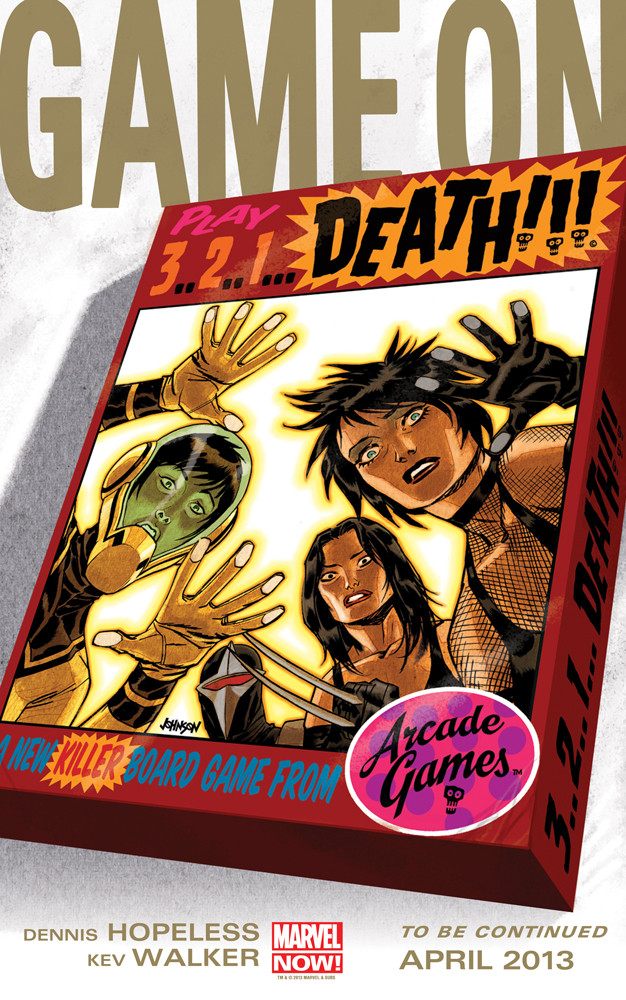 Love it or hate it, Avengers Arena has been one of the most discussed titles since Marvel NOW launched. We’re currently three issues in and the fighting hasn’t really escalated as much as Arcade (and probably some readers) had hoped. Most of the cast is still in hero mode and determined to try and find a way to stop Arcade, with the only deaths so far being examples or affirmations of the current status quo. But that all may change judging by this teaser which features the words “Game On”

Next up is Deadpool with a very cold reality coming straight at him: 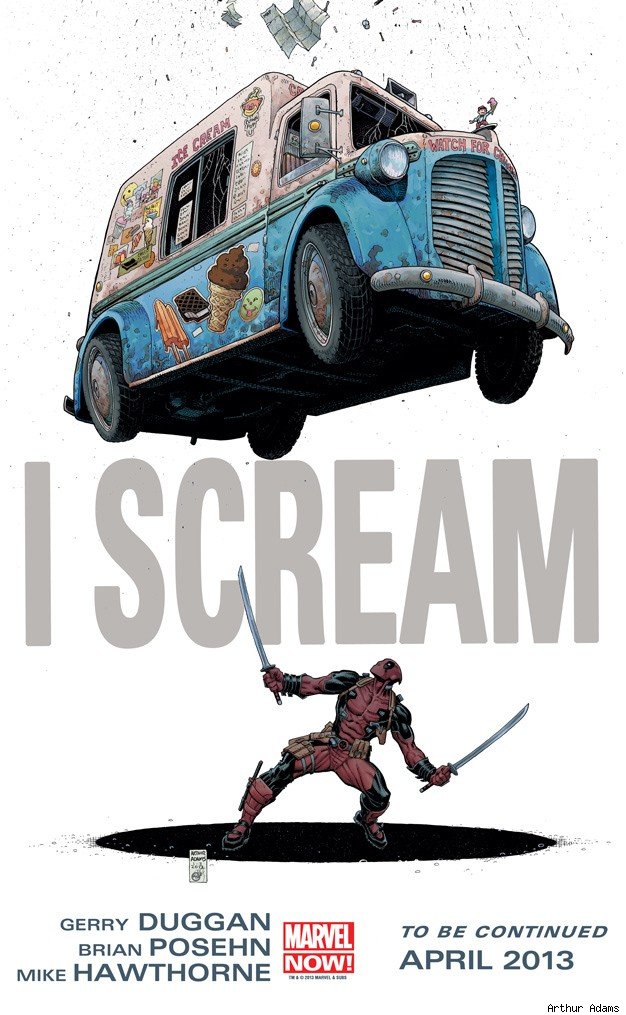 Gerry Duggan and Brian Posehn’s run on Deadpool has so far been an entertaining and funny ride that I don’t want to end anytime soon. I mean what other comic can boast zombie president battles? But all good stories need to end eventually and with the next story, which apparently has something to do with ice cream (although how can we ever be sure what it’s really about until we’re in the thick of it?), we get a new artist taking over for Tony Moore. Moore will be back with the next arc (as far as I know) but for this story Mike Hawthorne will be on art duties. Hawthorne is probably best known for his work on “The Un-Men” and “Queen and Country” and while I’ll certainly miss Moore, Hawthorne is a very good artist and I’m interested to see his interpretation of the Merc with the Mouth.

Next is Superior Spider-Man which sees Octavius in a little bit of trouble with The Avengers: 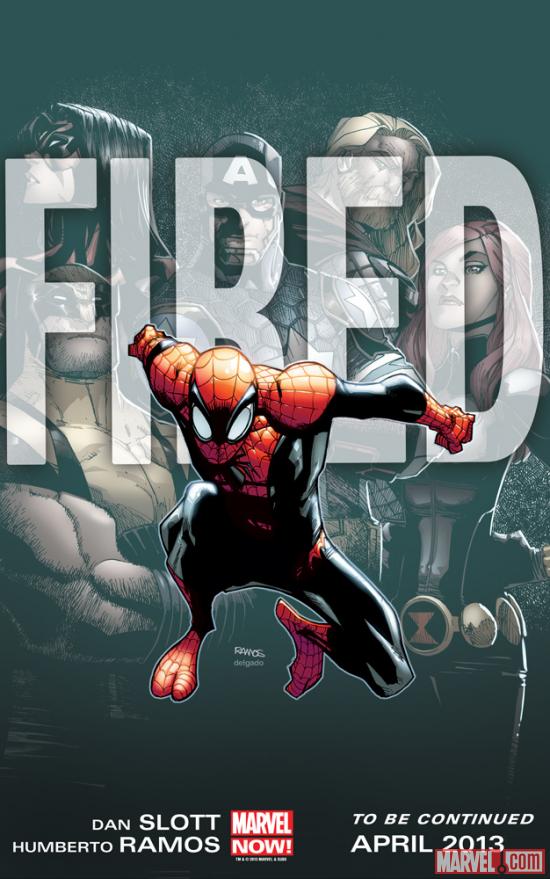 Superior Spider-Man has so far divided it’s audience (no doubt due to the events of ASM #700) but one thing most people have wondered is how Octavius will get along with The Avengers. Judging by this teaser, which sees Amazing Spider-Man regular Humberto Ramos (whom I adore most of the time) coming on board for art duties, things don’t go too well seeing as how the tagline is “Fired.” How and why he gets fired is something I look forward to seeing so April can’t come soon enough.

Next up is Indestructible Hulk with a very familiar phrase: 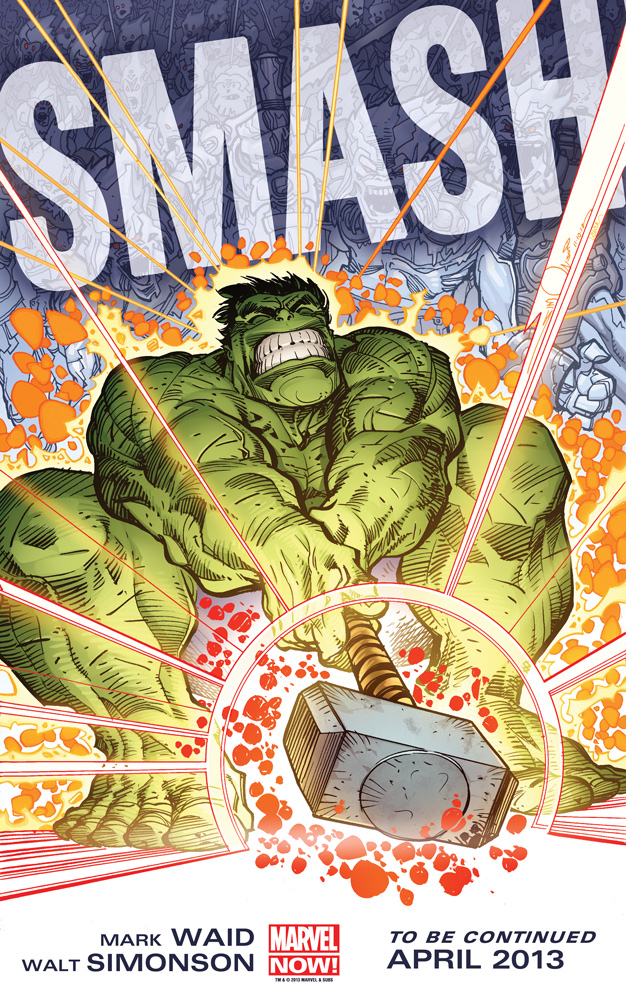 Indestructible Hulk has definitely been one of the biggest successes (at least in my opinion) since the NOW experiment started, especially with Waid behind the helm. Slowly but surely he’s doing for Hulk what he was able to do with Daredevil. The only complaint most people had, myself included, is with the art. It’s not that it was bad before, it’s just it didn’t really felt like it meshed. It got better with the second issue, and only time will tell if it ends up gelling (look at Gambit for another example of this) but with this next upcoming arc we see Walt Simonson take the reigns. Judging by the teaser, I’m excited to see what Simonson brings to the table, especially if it means an eventual Thor vs Hulk scenario.

Next is Journey Into Mystery which sees a major team up happening in the near future: 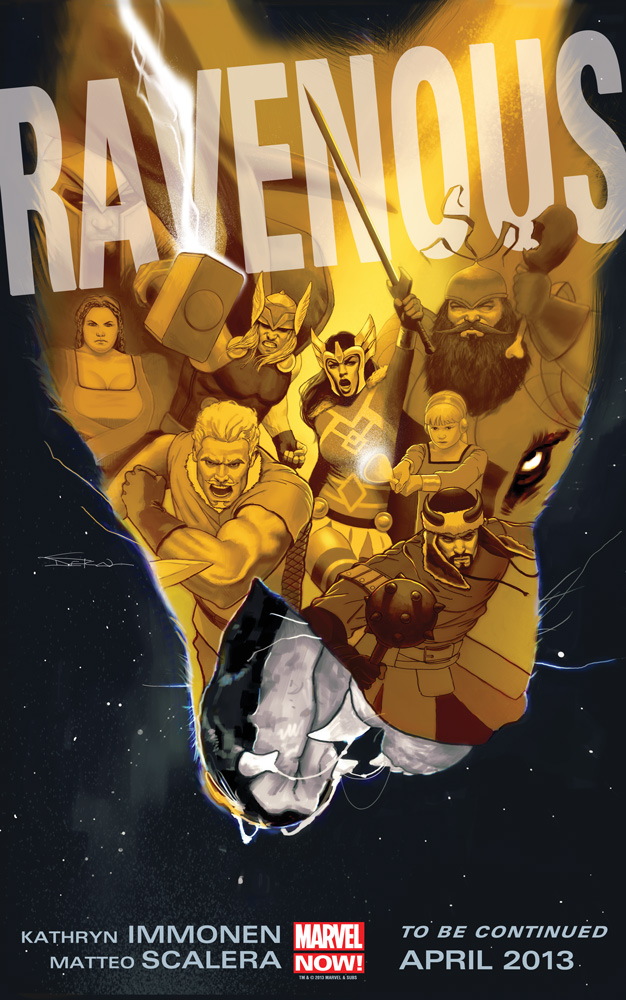 I’ll be the first to admit I haven’t really read a whole lot of Journey Into Mystery. I know I should but I’ve always had trouble figuring out where to begin. That being said, since Immonen took over it’s definitely been an exciting an entertaining read. I may not know a lot of what’s going on, but the adventures of Lady Sif have been fantastic so far and with this teaser it only looks to be getting better. Matteo Scalera is on art duties (with Valerio Schiti coming back for the next arc) this time around and it seems we are about to get some God of Thunder injected back into the series. I know I’m excited to see what happens here.

Next is Thunderbolts with a steamy hook-up that’s sure to get people talking:

Thunderbolts has been almost universally panned by critics and fans alike since it began. The biggest complaint of the series though seems to be exiting here in March. Steve Dillon’s artwork is a perfect example of how writing and art don’t gel together, but with the upcoming story starting in March, Phil Noto is coming on board. I’m still not sure how I feel about Elektra and Punisher hooking up, but with Noto on board I’m at least intrigued to see how this plays out.

Finally is a teaser for Uncanny X-Men, which is getting ready to start a revolution: 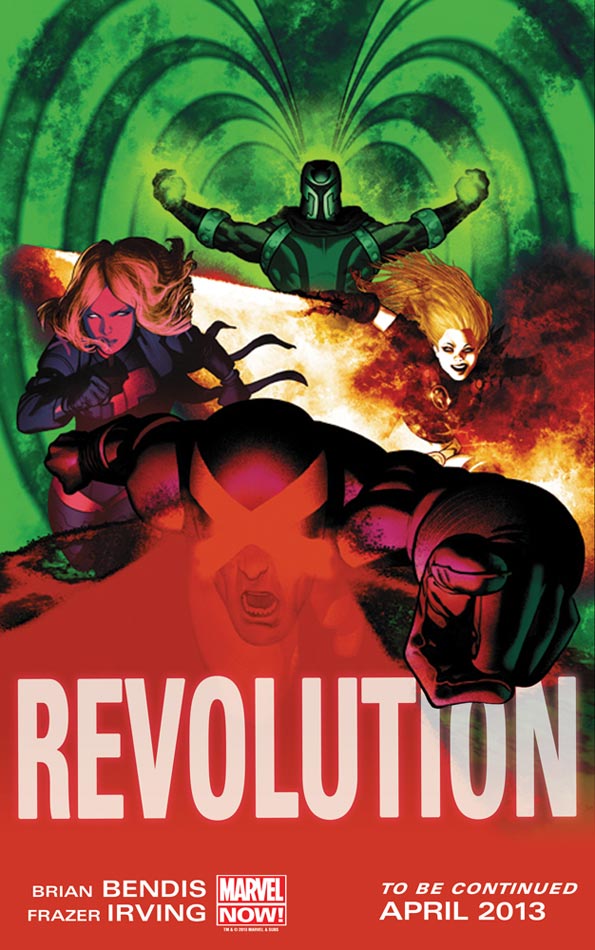 Uncanny X-Men is primed to start here within a couple of weeks and already we get a teaser of what’s to come. We know Cyclops’s new team is getting ready to become the new alternative to Jean Grey (the school not the returned mutant) and in doing so is getting ready for a revolution. How this will go is something only time will tell but the art team certainly has me interested. Chris Bachalo, best known for his work on Wolverine & the X-Men, is on art duties out of the gate, but starting in April he’ll be alternating with Frazer Irving, who’s done a ton of work with Grant Morrison and with the 2000 AD universe. Both are such unique and different styles, hopefully they can come together and mesh well when they’re switching off.

Well that about does it for all the recent Marvel NOW teasers. Hopefully you all found something you’re excited for. Be sure to leave a comment below and tell us what you think and what you’re the most excited for.