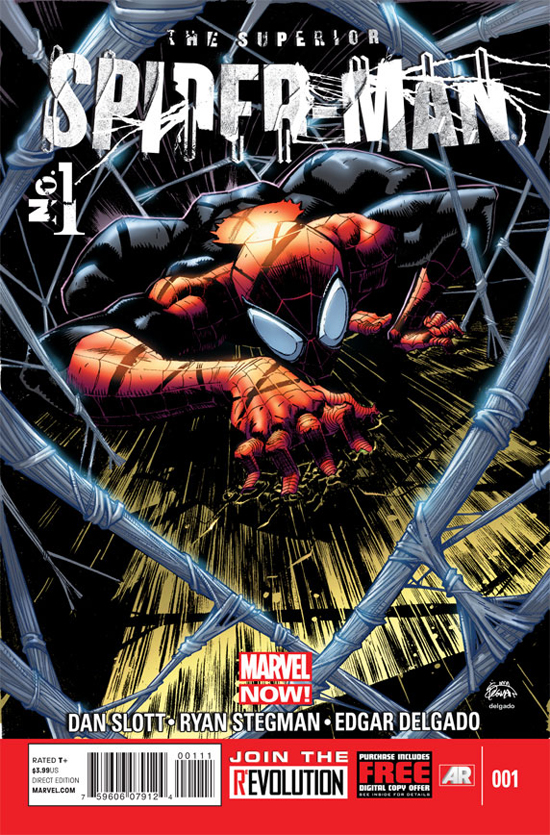 There is some indelible quality about Peter Parker that stirs something in people. It could be because he is a nerdy scrawny kid who becomes a hero, it might be because his reliance on a sense of humor to deflect scary situations reminds us of who we are, but I think the real reason is because he, at his core, is one of the most pure hearted literary characters we have.  Whatever the reason though, there is no denying that Spider-Man has become, not only a hero recognized across the world, but also one of the most valuable intellectual properties in history.

So, it takes guts to attempt what writer Dan Slott has done with the character in the last few weeks. For those who don’t know, and be warned this is a spoiler if you haven’t read Amazing Spider-Man #700, Doctor Otto Octavius has managed to switch brains with Peter Parker, taking control of Spider-Man and leaving Peter to perish in Doc. Ock’s disease ravaged body. So, now Octavius has become The Wall Crawler and all bets are off as to the kind of Spider-Man he will be.

There is no doubt Mr. Slott has shown great creative courage in staking out a new direction for Marvel’s biggest hero, and it was this hutzpah that had me so excited for The Superior Spider-Man #1.  That anticipation was not unfounded as this issue sports beautiful art and some solid character moments, but it also disappoints with a unlikable protagonist, and a set of puzzling narrative decisions.

First off, I need to say a big bravo to Ryan Stegman and his work here. I first became aware of Mr. Stegman’s pencils when he was on Scarlet Spider with Christopher Yost, and it was there that I immediately fell in love with his  larger than life style. In The Superior Spider-Man #1 Stegman has taken his work to another level, bringing to life, not just kick ass Spidey in action panels, but also subtle emotional beats as well. There is one splash page in particular that is exactly the kind of iconic Wall Crawler image you want to see, and I look forward to many more of its ilk from Mr. Stegman. However, great art can only get you so far, and, surprisingly, it’s the writing that ends up hamstringing this first outing.

The biggest problem with it,  is how little fun it is to read the Octavius/Spider-Man character. I don’t mind that he’s kind of a creeper with Mary Jane, that he’s a jerk to his coworkers or even that he has homicidal tendencies, but I do find it tough to invest in a person who is neither bad enough to be bad or good enough to be truly good.  In other words, I don’t have to like him, but I do need to like reading about him. Anti heroes have their place and when done right can be some of the most interesting protagonists out there, but Octo-Man, at this early stage, is a misfire.

The issue does shine in a few places and at the top of that list is the emphasis on just how smart this new Spider-Man is . Peter has always been intelligent, but Octavius brings a layer of planning that hasn’t really been there before. I loved seeing him actually invent things for the sole purpose of systematically breaking down his foes.  There is also an interesting juxtaposition of how smart he is to just how brave our new hero can be.  It was a very shrewd personality building moment to see how aversely Octavius reacted to being in danger. It effectively shone a light on just how selfless Spider-Man has been and how much it really defines his character.

I’m extremely curious to see if Slott can keep exploiting these differences, while also rounding out the rest of Octavius to make him a hero we love or even love to hate. I have great faith in his abilities as a writer, and have no plans to abandon the book, but I can’t in good faith say this is a comic that everyone should pick up.

Wait and See – Dan Slott is a great writer and has proven himself time and time again, and so for that I will continue to buy The Superior Spider-Man, but that doesn’t excuse this issue of its shortcomings.  Chief among them is a lack of connection, good or bad, to the main character, which leads to a lack of absorption in his story.  However, there are some clever conceits at work here as well as some stunning art, so if you are the type of person to give a book time to develop this may be right up your alley.

In addendum, and this is a very small nit to pick, but in a world where people are mind controlled and body swapped all the time, is no one going to even question why Peter is acting so differently? This kind or selective ignorance about constantly occurring Marvel events is a little bothersome to me.

For those wondering what I thought of the “last moment”, I will tell you that I was somewhat let down, because it seems to hint at a return to an earlier status quo. I’m of the mind that Slott didn’t go far enough with the big death at the end of ASM #700, so I’d rather see the book go crazier than return to safe territory. That being said, Dan Slott is a much better writer than I and I will trust the man until he lets me down.