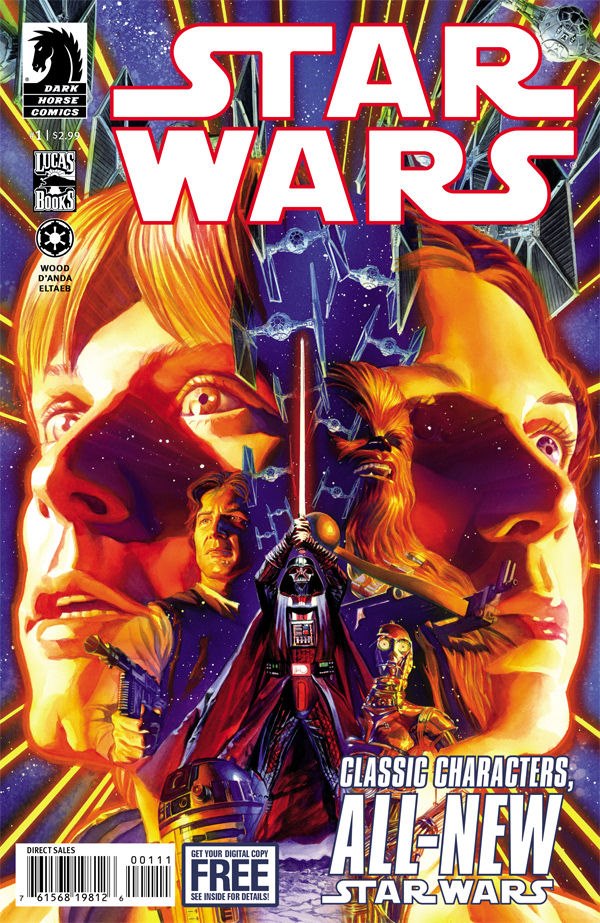 Star Wars expanded universe can be hit or miss for many people. The movies hold such a special place in many fans’ hearts that it can be traumatic venturing outside of Episodes IV, V, and VI. New characters, new planets, and different perspectives can send even the most hardcore of movie fans scurrying back to their Star Wars safety blanket.

Brain Wood sets out introducing new stories with our favorite Star Wars characters. There are no new names to memorize, no expanded history to brush up on. It’s the Star Wars movie fans are comfortable with while keeping it fresh and interesting. This is your opportunity to sit back and enjoy a new Star Wars story.

The first issue in Wood’s Star Wars is heavy with narration and dialogue. As a first issue, it carries the burden of setting the scene and tone for the entire series. Pretty heavy work for one issue. The narration does not distract from the general flow of the story. Instead, it enhances D’Anda’s artwork. A panel of TIE fighters departing a Star Destroyer is accompanied by information about the Galactic Empire and the Rebel Alliance. While most people reading this comic will be familiar with the Star Wars movie universe, the narration makes this comic book accessible to all readers. That’s right – you don’t have to be 100% familiar with the Star Wars universe to know what’s happening in this issue. That’s a rare treat with such a large title.

There are some parts of this first issue that will make you smile with delight. We get to see Leia in action as a pilot and a soldier. As one of the most well rounded female characters in science-fiction canon, Leia demonstrates her abilities as a leader of the Rebellion and as a young soldier. If you are into strong female comic book characters, look no further. Wood has shown us he can maximize Leia’s potential with only one issue. In addition to Leia, Wood’s portrayal of Han and Chewbacca is dead-on. You can almost hear Harrison Ford’s cocky voice in your head as you read Han and Chewie’s conversation about their connection to the rebellion. D’Anda continues to flexe his artistic creativity with the expressions on the faces of these two friends.

Let’s not forget the Sith. Vader and the Emperor make a short appearance, letting us see firsthand the psychological manipulation the Emperor deals out to Vader. Vader, who was always seen as a powerful character in the movies, is shown in this issue as a puppet of the Emperor.

It’s a buy. Wood has done a great job setting up his readers to sit back and re-experience this universe. Don’t let the idea of an expanded and confusing universe keep you from reading this issue. It was made for you.