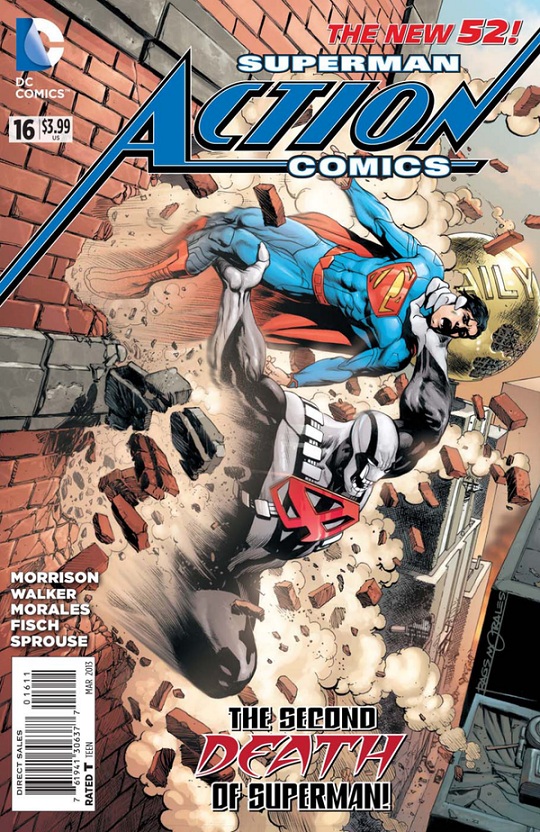 Almost exactly a year ago today, I plopped down to read Action Comics #5, eager for the next chapter after the first four issues had started off so well.  Finishing the book, as the Anti-Superman Army and Legion of Super-Heroes (who all just showed up with no explanation) completely veered the story away from what I was expecting to read, I could only scratch my head in absolute confusion.  You see, I had not experienced much by Grant Morrison at that time, and what I had was actually fairly structured in its delivery.  Now, after going back and reading his catalog in the year that has followed that day, I can easily see that the (initially) scattered narrative should not have come as any surprise.  And so, applying the knowledge of my quasi-recent read-a-thon of his works, I am positively certain that I can state this with absolute confidence: I have no idea if this is a good issue until I read the finale next month.

I know!  ‘But Sean, you’re a reviewer!  This is a review!  Make with the pre/post-judgements!’  Okay, okay.  This issue is slightly confusing in format, hits high-points in action, low-points in artistic consistency, and a steady row of question marks in story.  But, depicting a battle of wits and brawn that takes place simultaneously over all points in time, space, and realities utilizing only words and static pictures is fairly aware it is starting off on the ‘I know this may be a little hard to follow, but…’ trail; so I am hesitant to judge it based on that fact.  The story takes place in, well, what I can make an educated guess is 4 different points in time (far-future, pre-today, today, and referencing tomorrow that has not occurred yet but was 2 issues ago), 3 separate dimensions, and involves a cast utilizing practically every single character introduced in the 15 chapters prior.

As the Legion (Issues 5-6) fight their way back to the present from the year 3030 to assist, Superman returns to ‘yesterday’ from the ‘tomorrow that has not occurred yet’ (Issue 14) engaged in a titanic struggle against the Kryptonian ghost, Xa-Du (Issue 13), as well as the Neo-sapien niece of Lois, Susie (Issue 12).  The skies turning red, Superman continues his fight as he sends Lois and Jimmy to the hospital to locate the comatose ‘Mr. Triple X’ (Issue 15).  Time literally shifts to ‘today’, where Clark struggles against the combined might of the Anti-Superman Army (comprised of primarily Issues 5,6,10,11,12).  But, as Krypto (13) joins the fray, the ‘mysterious little man’ (Issues 1-15, yes, every single one) decides to balance the scales, bringing reinforcements in the form of the alternate dimension ‘Last Knight of Tomorrow’ (that plagued President Superman of Earth 23 in Issue 9).  Yeah.  You did see Morrison’s name on the cover, correct?

Artistically, I weep for both Brad Walker as well as Rags Morales.  They are tasked with visually separating these timelines into something discernible, and do so with mixed success.  Faces continue to be a weak spot in consistency, with some panels looking rushed at the expense of loose emotion in the posture and expressions of characters; while others deftly capture a moment of emotive resonance in still.  On the action panels though, both Walker and Morales show a kineticism that leaps off of the page during the struggles.  Eschewing a motley collection of ‘power-poses’, their battle scenes capture an element of motion in each frame of the fight as it progresses.

The backup, a beautifully retro-style Legion of Super-Heroes story written by Fisch, is a fun little snapshot of Legion life in the far-flung future; and reads as the introductory episode of a new LoSH arc even though it is delivered as an expository ending.  The art by Chris Sprouse is delightful, capturing a feel of old-style comics while still delivering the modern storytelling through sequential art that the fan of today expects.  While ancillary at best, it is a tidy little story that can give the reader some semblance of balance after the chaos that preceded it.

Buass.  That’s my Buy-Pass amalgamation.  Been following the majority of the last 15 issues?  Pick it up, as you are in too far to back out now, and plenty of poo hits a multitude of fans across all perceived realities.  Thinking of jumping on to check out the end?  I cannot in good conscience recommend such action.  I hate giving such a vague review, but I am not a Morrison fanatic (as my personal experience with his work runs about 50/50) making apologetic excuses for the current issue; I just cannot justify making a sweeping judgement on a story presented in a manner that is entirely dependent on the final puzzle piece dropping before the picture becomes clear.  So this is what you get until next month, when I will make sweeping judgements with all the facts at hand.

Jump-On Point:  Oh hell no.  I’m not even sure starting at the 0-issue could get you where you need to be, so I will say the most recent starting point to get the gist of the majority of this chapter would be Issue 9.