For as long as I live I will remember 2012 being a year that completely kicked my ass. Mentally, physically, emotionally, as well as creatively. The comic books that I’d read this year bore into me in ways that at times I was not prepared for. Inside of their artful pages I witnessed so much. Battles erupted inside of my mind’s eye, while trying to shield myself from psychic attacks. Friends that I’d known and fought beside of for as long as I could remember turned their backs on me. There were times when I was forced to watch family members I love gurgle their final words before death. There was even an evening when an older, wiser, more powerful version of myself installed a pocket reality inside of my bedroom closet. This closet was where I could practice becoming a God.

I will always remember 2012 as the year that I had the top of my head ripped open, and an innumerable amount of talented artists and writers poured themselves atop my brain. It was a great year, and here before you are my Favorite Comics of 2012 …

A complex journey born from the fractured minds of writer Kasra Ghanbari and artist Menton3, Monocyte is a beautiful confrontation of the soul versus science. In a wasteland terraformed by man’s own hubris, the One Eyed walks toward his rightful place. The One Eyed is wrath, a dark and poetic voice of reason in a land that no longer knows the meaning of the word. In Monocyte, the time of honest men has long come to an end. I needed all of my bearings to read it, but once I caught the rhythm, I loved every word. 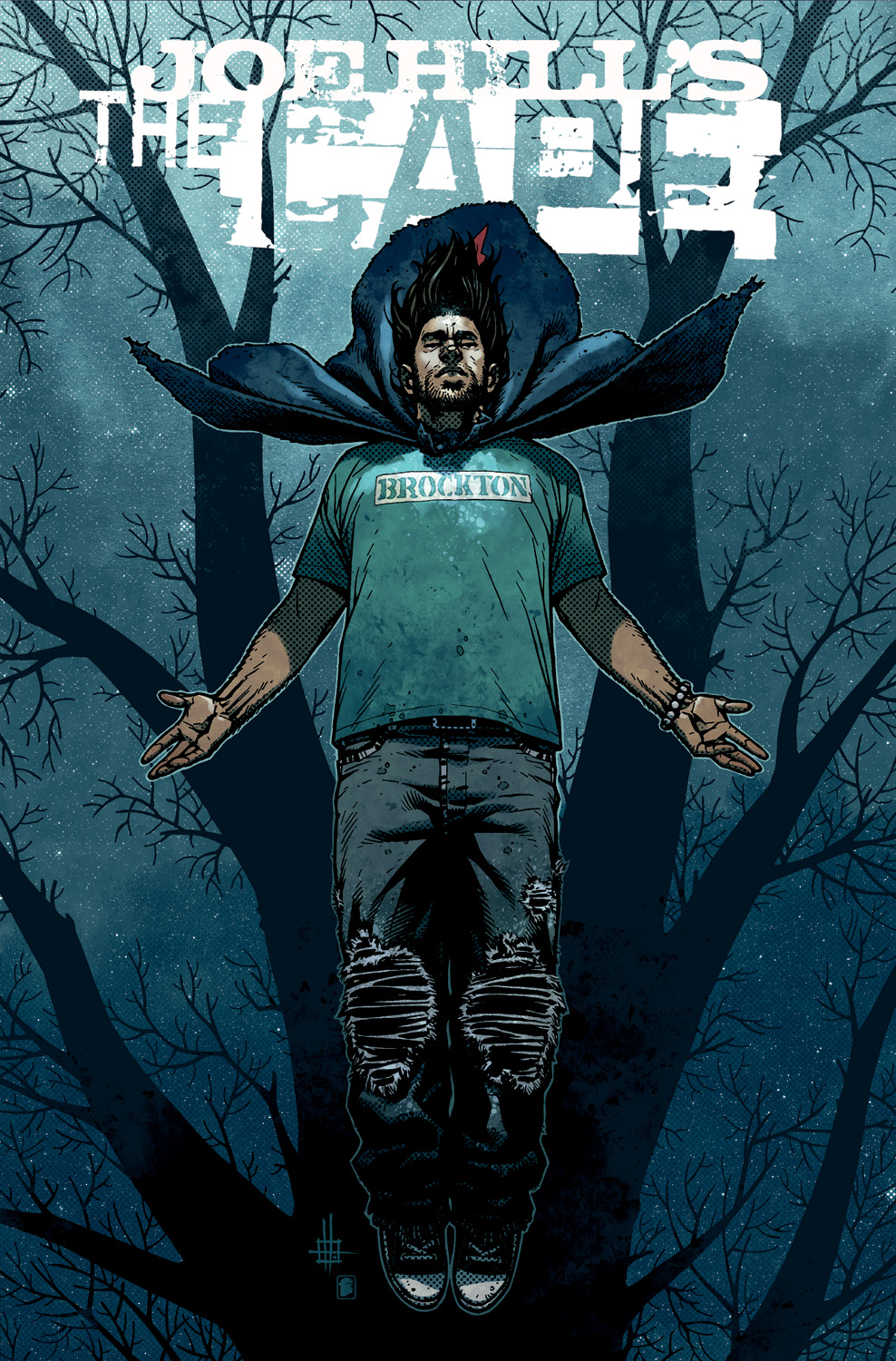 The less that you know about Joe Hill‘s The Cape the better. It’s the kind of comic book story that just when you think the circumstances can’t get any worse … they do. They really, really do. I highly recommend it. 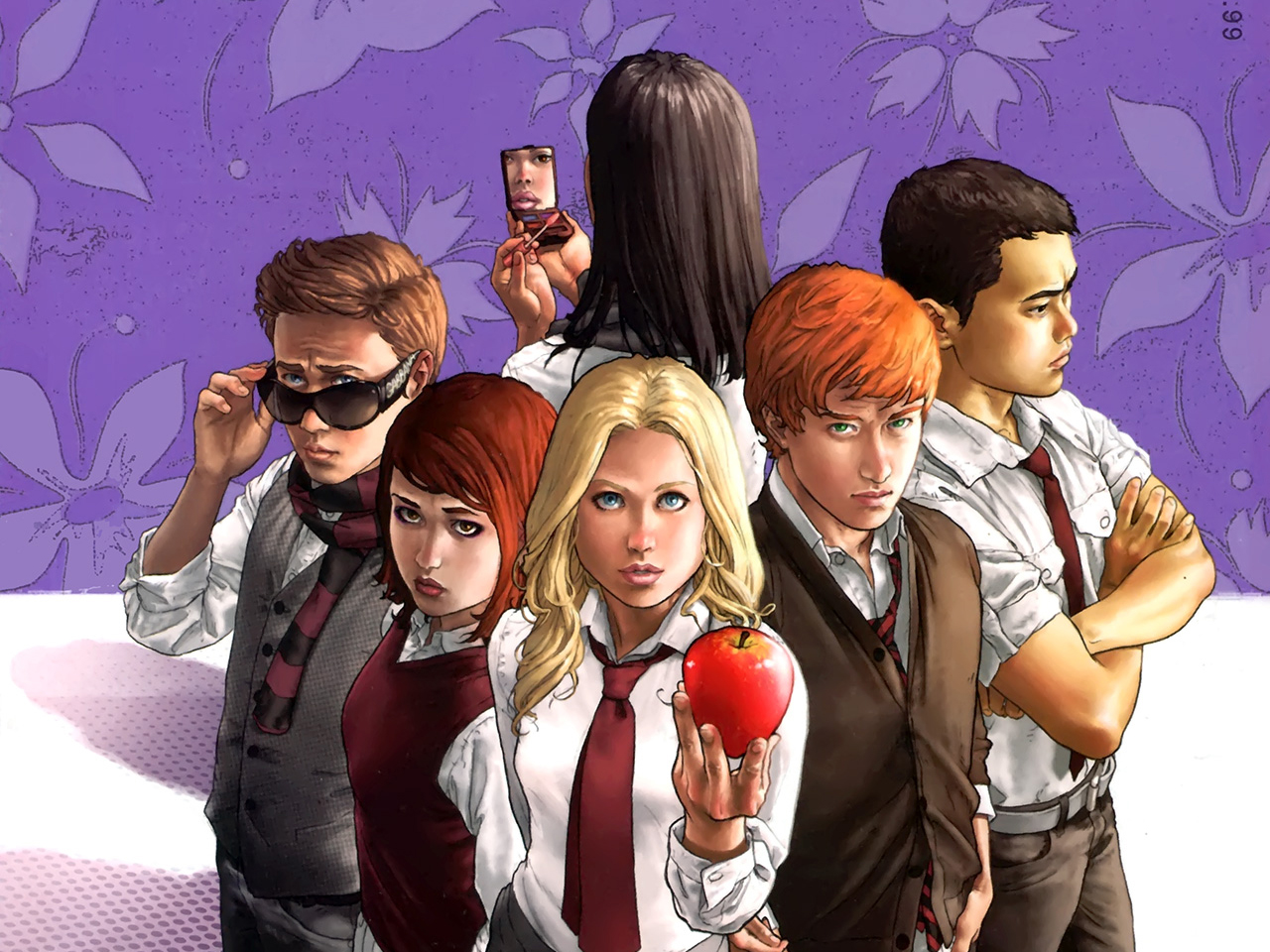 You didn’t think I was going to make a Top Ten list and not include Morning Glories, did you?  Writer Nick Spencer and artist Joe Eisma have kept the activities of this sinister prep school at the top of my “To Read” pile all year round. I’ll admit that the series is best read in chucks, due to its complex nature, but each and every time an issue lands in my lap I can’t help but squeal with joy. What I love about Morning Glories is its relentless sense of mystery and intrigue. Each and every issue builds upon events of the past, present, and future, making each and every moment and character interaction something to be studied and deciphered. The series never lets up with challenging its readers to question what and who they believe within the story. For those reasons and many more it’s one of my favorite books of this past  year. 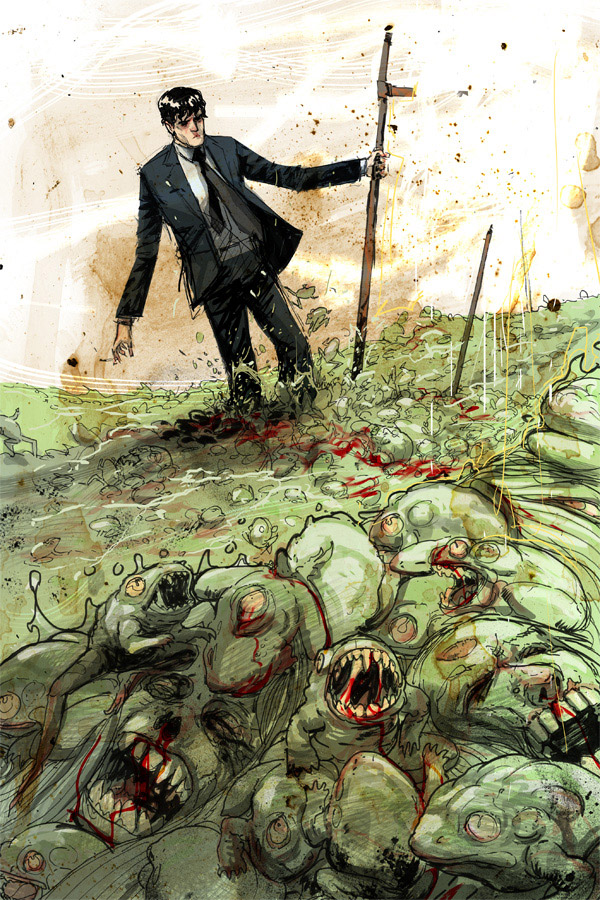 Kurtis Wiebe‘s Green Wake reminds me of what you’d get if you took Rod Serling’s The Twilight Zone, Jacob’s Ladder, and a little bit of Jean Pierre-Jeunet’s City of Lost Children, and threw them all into the baddest of witch’s brew. Now doesn’t that sound like something you’d like to read? 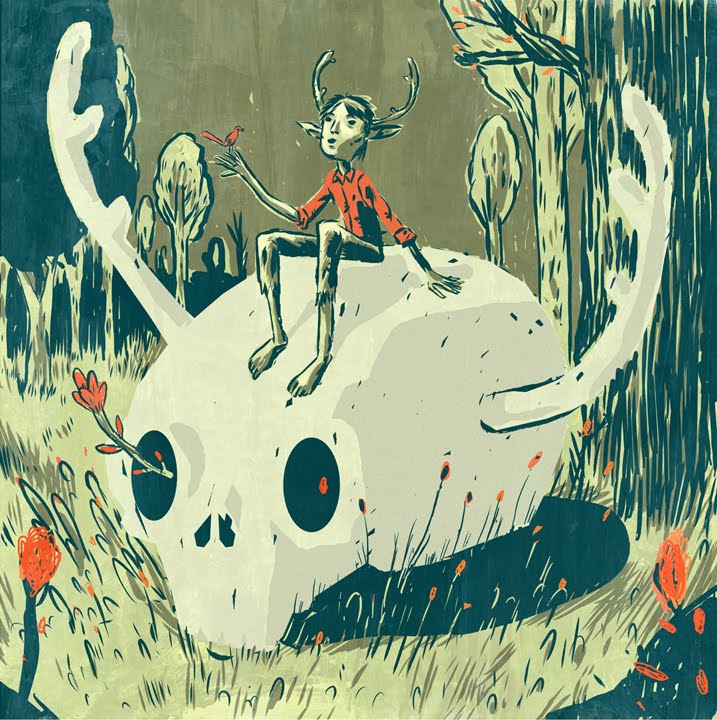 Sweet Tooth is what I refer to as a “powerhouse comic.” Jeff Lemire, a master of emotionally driven narratives and memorable, quirky characters has spared no expense while telling the oddstory of Gus and his father-like companion, Jeppered. During the course of this year we’ve watched characters within this story live and die in the hopes of finding freedom. That journey has been an arduous one, but there was always one thing that remained all throughout those hard times when all was thought to be lost, hope. Overwhelmed by mystery, intense action, and most of all, heart, Sweet Tooth has been one of the most rewarding comic book reading experiences I’ve had this past year. The series might end tomorrow (literally) but the story of Gus and his friends will live on in my mind forever. 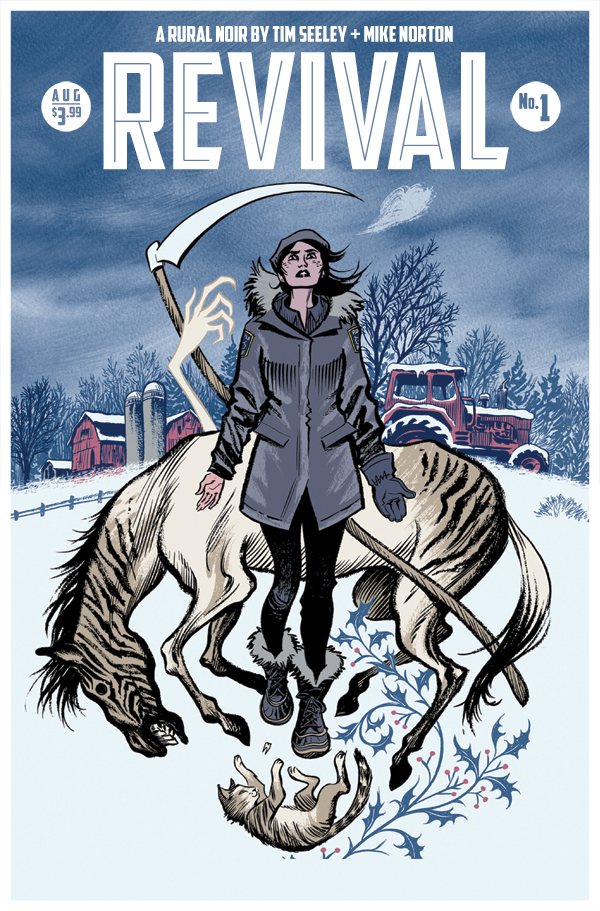 Having just caught up with Revival I’d like to give it a little more time to sit on my tongue before deciding what it truly tasted like. Coming off to me like the Twin Peaks of the Image Comics lineup, Tim Seeley and Mike Norton‘s Revival is horrifyingly unique. In a medium where zombies are an every day occurrence it’s relieving to witness Seeley and Norton doing something different with the genre by building their story with mystery and too close for comfort character moments. Revival is one of the best series of 2012 for sure.

And now onto the winners! 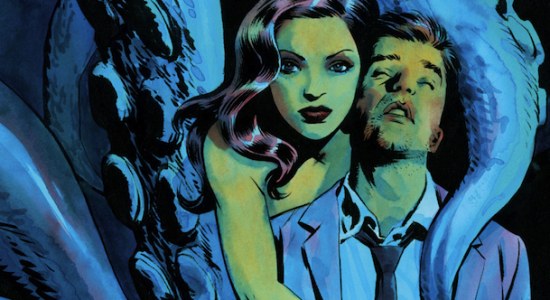 It had taken me nearly a year to read it but damn if Fatale wasn’t one of my favorite comic book series this year. In Fatale, Ed Brubaker seamlessly blends Lovecraftian horror with a mysterious noir edge that packs quite the punch against Sean Phillips‘ gritty, atmospheric art. Characters feel real while remaining otherworldly and there’s danger around each and every turn, and hiding within every dark shadow. It’s a total “immersion” comic that never loses its pacing and masterfully goes to some of the most evil of places inside the indie comic universe. 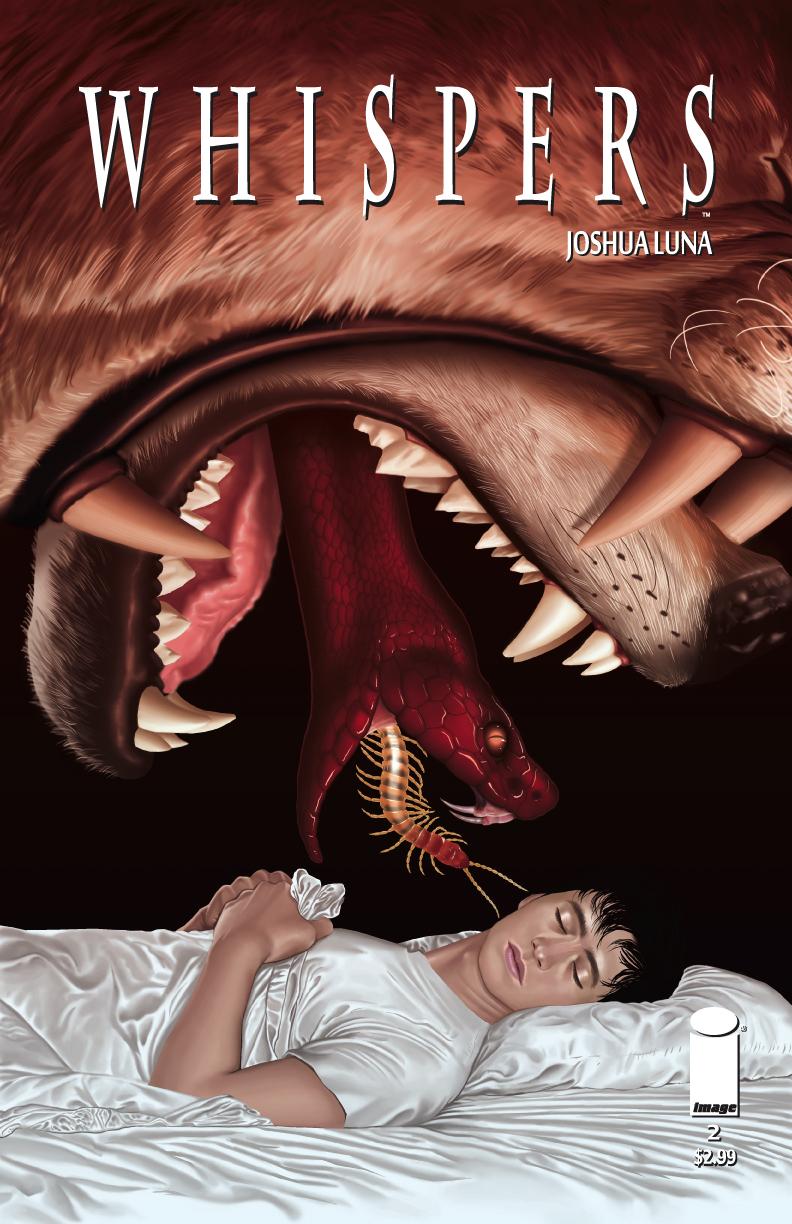 Jonathan Luna‘s Whispers speaks to me. It’s a story about paranoia, astral projection, mind manipulation, demons, death, and mastering the human mind. How could I not love a comic series built around those themes? Jonathan Luna is by far and away one of my favorite writers in the comics industry. He has a particular way of putting me so close to his characters that often times I wince at their misfortune as if it were my own. There are very few people who can get me to that level and Whispers places me there, every damn time. And I love every page of it. 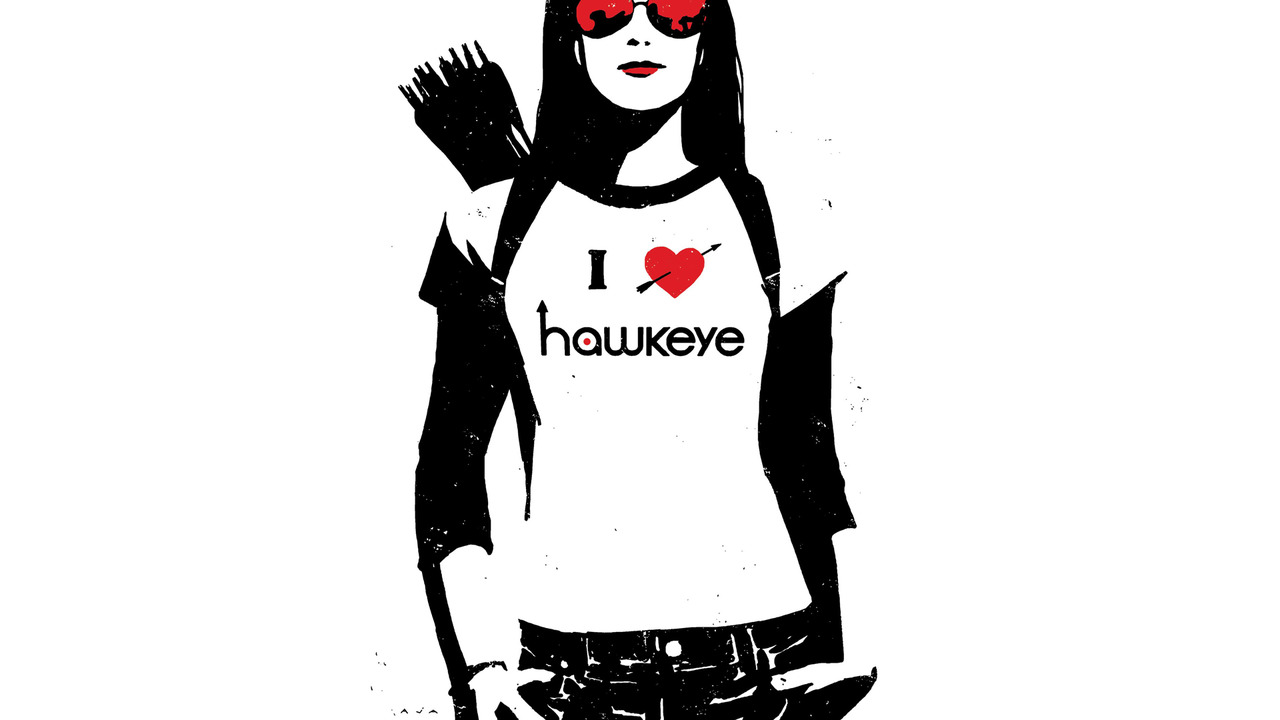 I love everything about Hawkeye.  I love the smart characterizations, I love Lucky the Pizza Dog, I love, love, love whom I call Lady Hawkeye, and oh yeah,  Cliff Barton is the modern day Robin Hood we’ve been waiting for. Mark my words that this is going to be The Year of the Fraction as Hawkeye and Fantastic Four/FF  continue to dominate sales numbers and blow the collective minds of comic fans everywhere. The series is fun, always hilarious, whip smart, presents a character growing in his own popularity like no other. I love Hawkeye, and you should too. 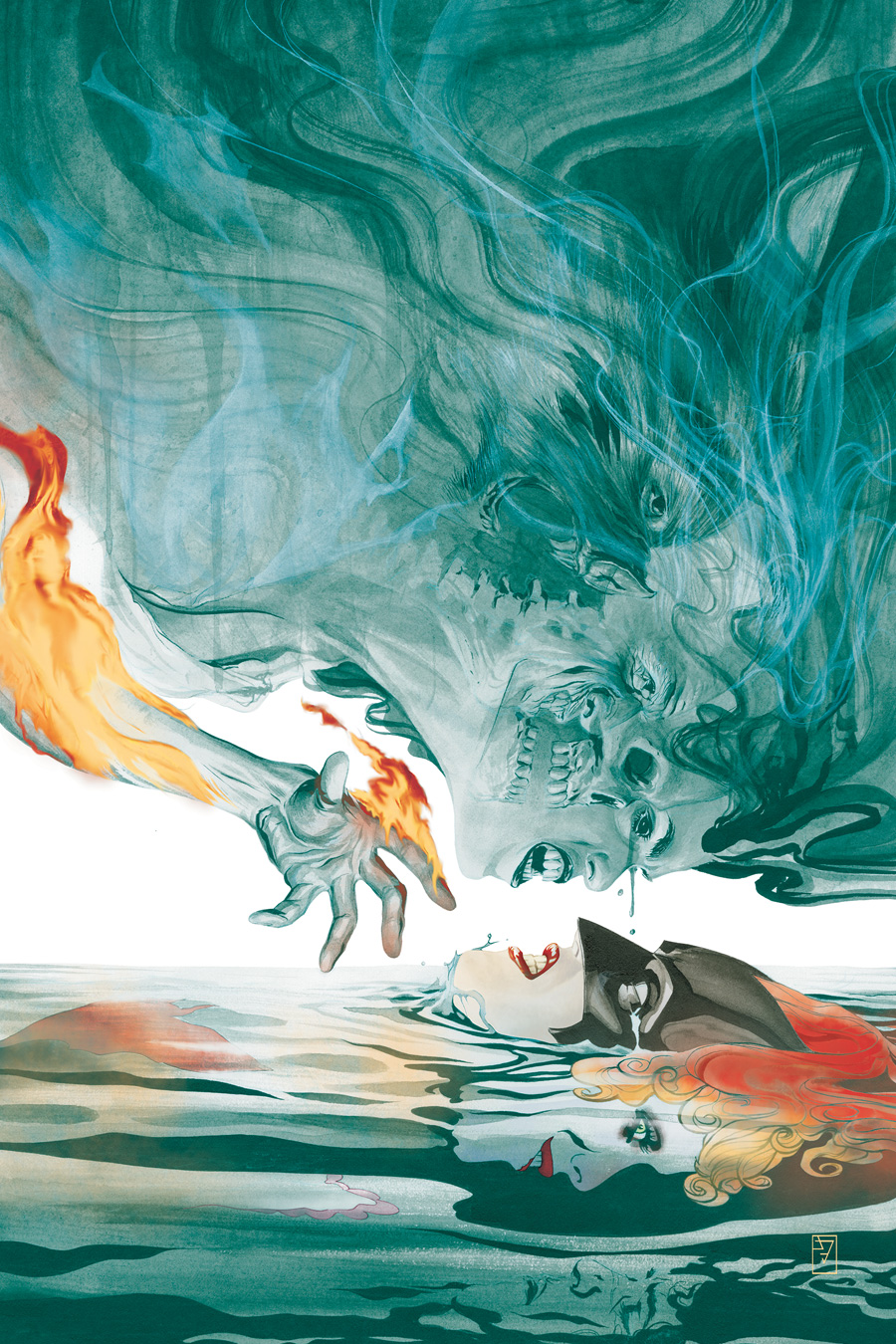 I really can’t say enough good things about Batwoman. I find Kate Kane to be an inspiration to comic readers everywhere and the dark, horror-oriented backdrop of her series to be outstanding. I really enjoy what a powerful narrative she has, as well as the way there is always such conviction to her actions as well as her words.  Her villains tend to be of a darker variety than your typical Bat-related faire, which allows her book to take on a much darker tone at times than even Scott Snyder‘s Batman. Because of Batwoman, J.H. Williams has proven himself to be an amazing artist as well as a writer. And if this is what he’s done for Kate Kane than I can’t wait to see what else he might have up his sleeve, further down the line. 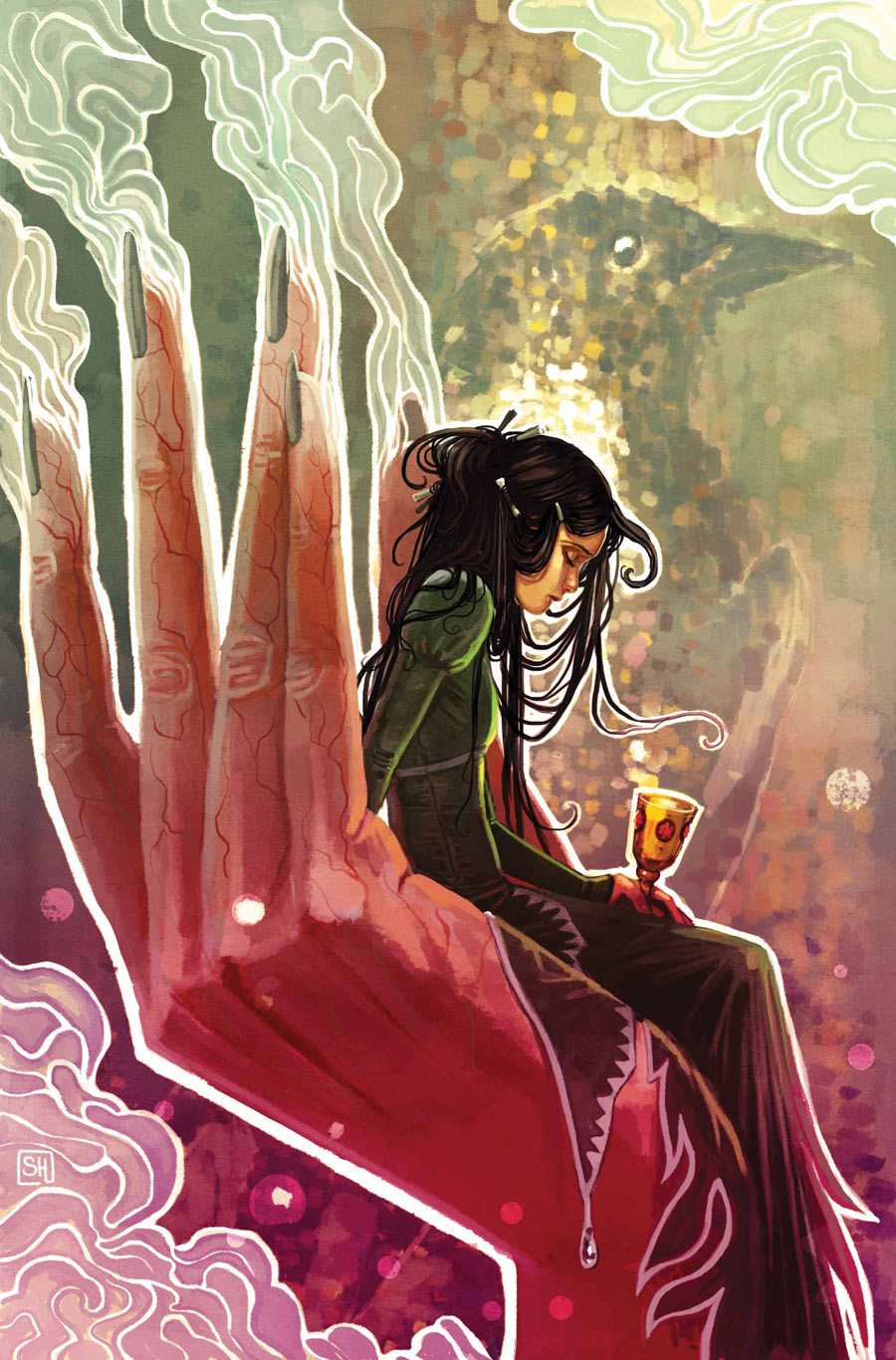 Epic, massive, and beautifully complex, Journey Into Mystery is one of the many shining gems of the Marvel lineup this past year. Journey Into Mystery allows us to explore The Nine Realms from the eyes of a young Loki Laufeyson and the many denizens of his land from both above and below the depths of Hel itself. Let me just ask you this: If I told you that you could read a series set in The Nine Realms where a young Loki is essentially a secret double agent spy, who capers about casuing mischief and righting his own wrongs, would you read it? Hel yeah, you would! 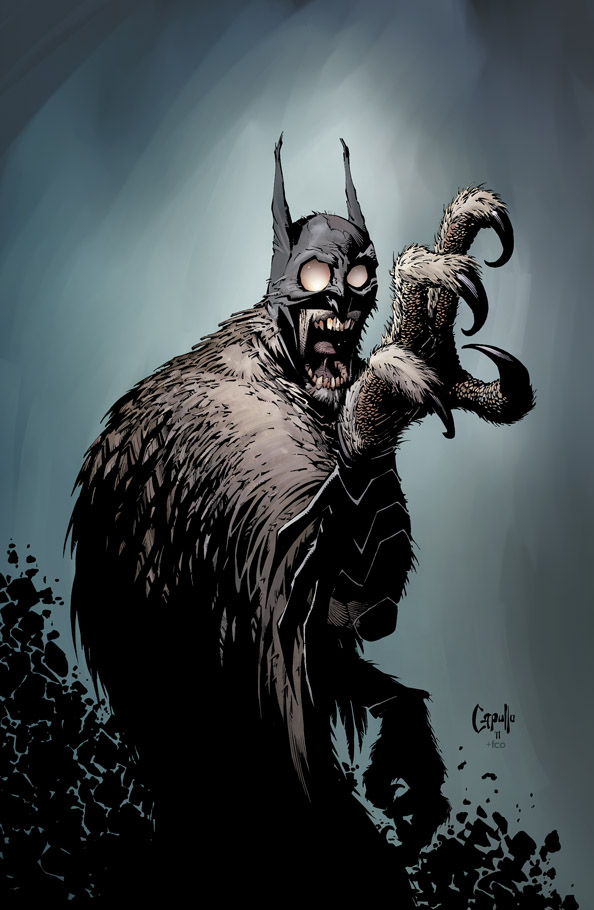 I know it. You know it. Everyone knows it … Scott Snyder‘s Batman is freaking wonderful! Not only is Batman my favorite comic hero of all time, but what an incredible journey I’ve had since getting back into his flagship title by way of Scott Snyder and Greg Capullo. Both of these men have worked their asses off all year round to make sure that each and every issue of Batman has expanded upon the last. In my opinion, they’ve managed to add a whole other level to Bruce Wayne and Batman that I feel we’ve never seen before. From the invention of the Court of Owls to the horrifying return of The Joker, Batman is a book to revel in each and every month. 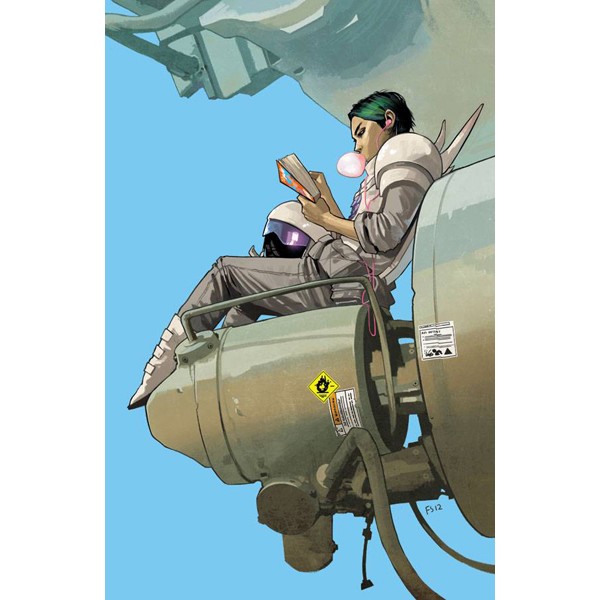 There was never any doubt in my mind that Saga was going to be an amazing comic book series. Briank K. Vaughan and Fiona Staples, together, have created something that feels ultimately unique and just as massive as Star Wars. More than any other Image book on the shelves today I can’t wait to see just how long we can hold on to this Sci-Fi Romeo and Juliet series. I feel as if the world of Saga still has so much more to give and that what we’ve seen so far is merely just the tip of the iceberg, and I’m ready for anything this book has to throw at us. 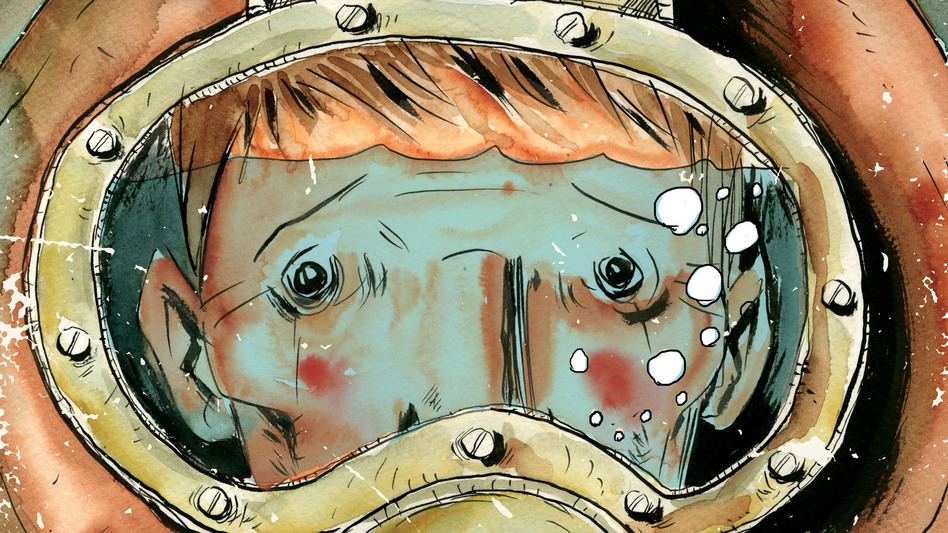 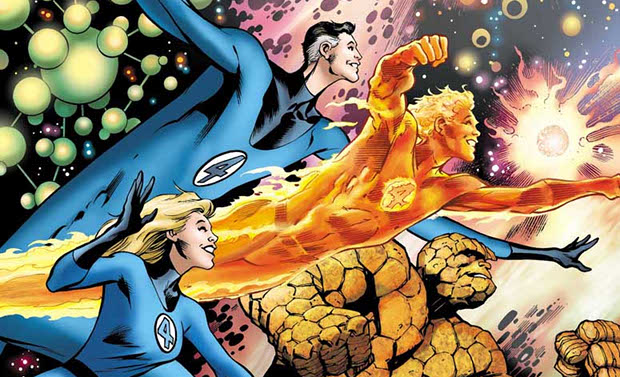 I found my comic book family this year, and that family is Marvel’s The Fantastic Four. Under the mighty wing of our own Bob Reyer: Reed, Sue, Ben, Johnny, and the rest of the family found a way into my comic book collection as well as my heart. Never before have I read anything with such a sense of adventure, of team work, and being what it takes to go above and beyond the call to heroism. Jonathan Hickman, is a man with carefully laid plans, and that’s never been as blatantly obvious then when he’s writing an arc involving the comic book world’s first family. From the far outreaches of space to those endearing moments at the dinner table, to worlds within worlds and beyond, the Fantastic Four is my favorite comic book series of the year … well … almost. 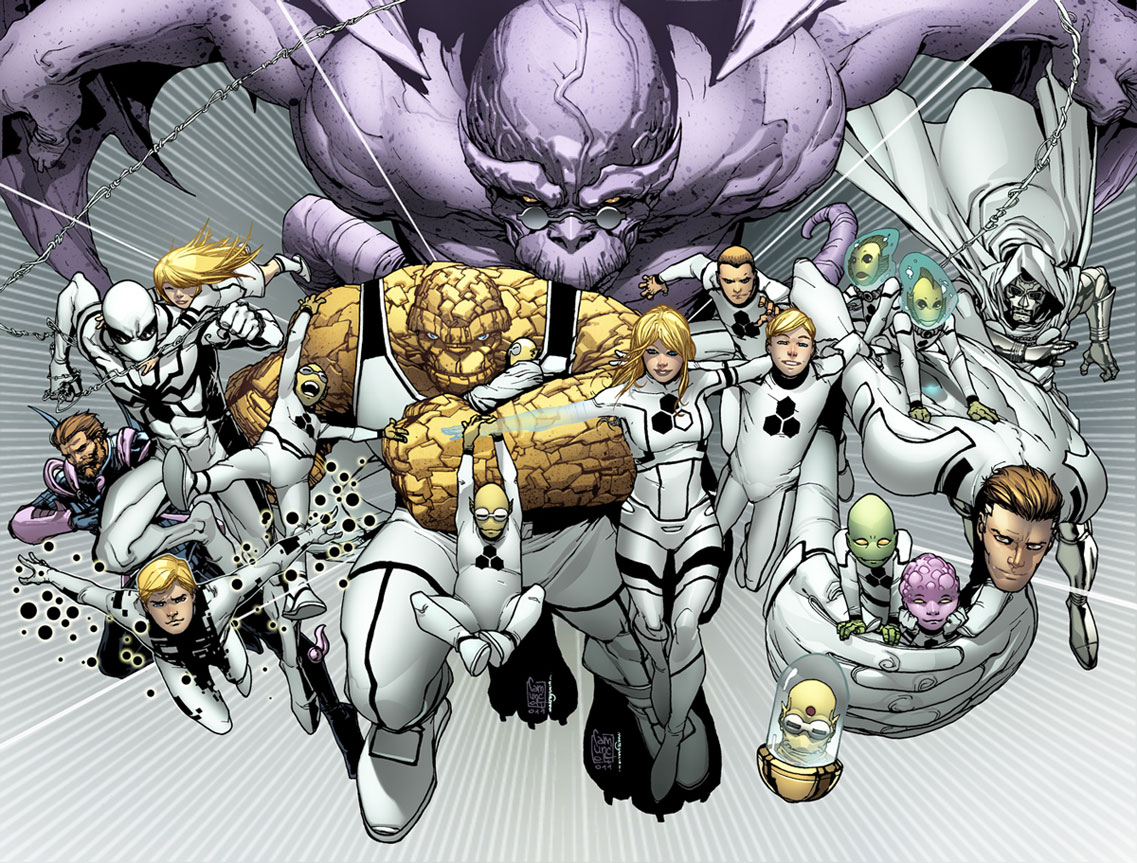 Who wants to ride through the desert at tops speeds on the back of turbine engine motorcycle, with a hot lady vampire teacher’s arms wrapped around their waste? Who wants to meet an older more powerful version of themselves and gain the knowledge of what can and will be? Who wants to share a bathroom with several different alien races, oh, and Spider-Man? Who wants to vacation in Wakanda and ride the beasts of that wild land headlong into danger? Who wants to learn, grow, and be a part of adventures so magnificent that the echoes of your good times will be heard throughout each and every universe? Do you want to learn all about the most powerful superhero ever birthed? Do you want to fall in love with Valeria Richards as I have? Do you want to find out just what the hell is inside of Dragon Man’s muffin recipe? Than I urge you, I beg you, I ask you … read Future Foundation. There are no limitations to where this series can take you, none what so ever. For those reasons, and so many more, FF, the Future Foundation, is my favorite book/series of 2012.

See you all in the funny papers …

* This list was compiled while listening to the albums: The Haunted Man by the band Bat For Lashes, Happy New Year by the band Oneida, and Holy Hell by the band Noun.