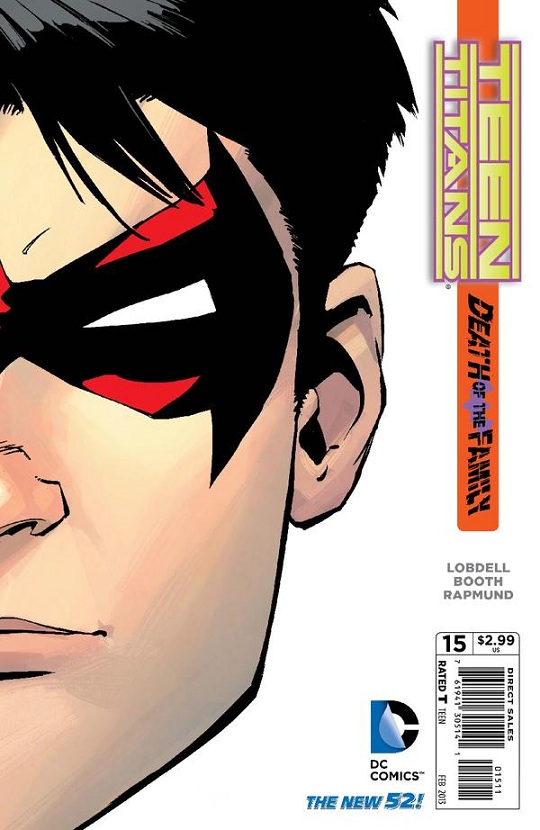 The Joker is all about efficiency.  How else could he cause so much chaos in such a short amount of time without maximizing his efforts?  So it is, in the fifteenth comic issue bearing the Death of the Family banner title, that we start to see behind the curtain of his planning; and how he is able to hit two birds with one stone (pun intended) while keeping their mutual allies occupied elsewhere as he handles the personal elements of his plan.  And even though the dialogue is a little stilted at times in this chapter of the crossover and series at large, Teen Titans #15 comes across on the upper end of the spectrum in one of those aspects, but falls just short in the other.

With Red Robin missing, the leaderless team of the Teen Titans call the one person that Tim left available as a contact for help, Batgirl.  Filling the young heroes in that the Joker has captured their fellow teammate, Batgirl gives the rookies a plan of attack to search the foreign city of Gotham in a bid to rescue him before it is too late.  Walking (or in this case running) straight into the plans of the Joker, the Titans find out they may have bitten off more than they can chew, and are assisted by some unlikely allies with a common interest in their goals.  Meanwhile, the psychological torture of Batman’s associates continues, as the Joker taunts his now captive audience with how much he really knows about their identities; tormenting Red Robin with the logical madness of his diabolical actions and the reasons behind them.

I have been pleasantly surprised with the efforts of Lobdell on his titles over the last few months, and as far as a crossover title, this is actually pretty close to everything I could ask for.  The plot pulls at the hanging strings on a multitude of Bat-Family books, drawing the Titans, Red Robin, Batgirl, the Red Hood crew, and of course the Joker together; as well as a sense of cohesion that has been missing in many other titles joining into the DotF storyline as we struggle to figure out the timing of events.  Unfortunately, as a Teen Titans chapter itself, there is something missing that keeps the story from reaching the heights it was aiming for in the last few months.  Assisted by Fabian Nicienza this issue with dialogue, there is a noticeable difference in the snappiness of conversation between the characters.  This is not to say it is bad, just more sporadic than usual in its hits and misses when trying for humorous quips.  Overall, as a Titans issue, if it is meant to show how much disarray the team would be in without Red Robin, it succeeds; but it does so at the cost of the fun and energy that has been an essential component of the title over its run.

An area severely lacking in fault though, is Brett Booth’s gorgeous artwork on nearly every panel.  He has clearly claimed the characters for his own, and manages to make each one of them dynamic and expressive in their own manners; a difficult task to do in a team title.  Sparing little detail, his backgrounds are rich with little minutia, giving a lived-in feeling to the setting of Gotham without making it seem too busy.  If that is not enough, the chalkboard chibi-drawings detailing the Joker’s plan are cute enough to make up any of the remaining balance you would need to come to the same conclusion.

Split-decision.  If you are buying it as a Death of the Family companion piece, I highly recommend Teen Titans #15, as it really goes above and beyond to make sure it is not just a tangential relation to the main storyline.  If you are looking for a solid Teen Titans issue though, I would regretfully pass on this issue if judging it by its own merits.  What really makes this call difficult is that the next issue practically screams to be a great read, so it may be worth hopping on here to lead into Issue #16, but I cannot permit myself to make a judgement based off of potential.

Jump-On Point:  You can pickup issue #15 and read it without any previous knowledge, but it is infinitely better if following along with the Death of the Family storyline and some of its tie-ins.