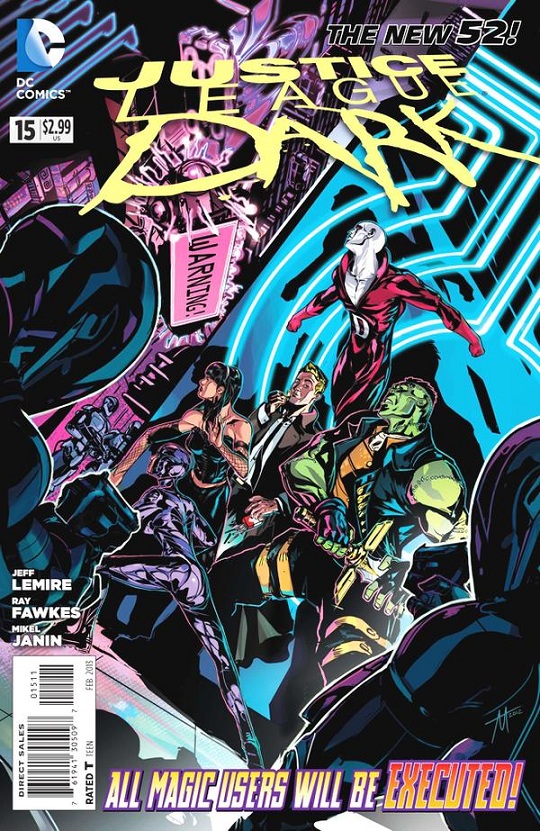 As the author Arthur C. Clarke once said, ‘Magic’s just science that we don’t understand yet.’  And while this may apply to the world on which we live, it is a question that has been relegated to ancillary at best within the setting of the DC Universe; as either option can shoot a face-melting beam of energy with equal efficiency.  So, in the interest of exploring this dynamic, it comes as no surprise that Justice League Dark #15 leads our premiere team of magicians and occultists into a land where magic and technology are at direct odds with one another.  But, can the issue use its backwards sorcery to conjure up a great story to justify this exploration into magic’s place in the world?  Uoy teb ti nac.

After surviving the adventures required to find the mythical Books of Magic, the team now find themselves short Zatanna and Timothy Hunter; who were teleported away as soon as Timothy opened one of the tomes and found an electronic device housed within.  Stranded in this new land called the Wild Zone, Zatanna finds her powers greatly amplified, and is swept up in the energies at her disposal as Timothy struggles to keep the fishnet clad heroine in check.  Not everyone is happy about the new arrivals though, as a technologically armored officer of the law named Vikar is dispatched to arrest the pair for their breach of anti-magic laws in the land.  Meanwhile, the rest of the team desperately try to figure out a way to unlock the books and rescue their friends, finally finding a key to follow after their misplaced comrades.  As they arrive, they find that each of them reacts differently to the energy that resonates through the Wild Lands; and with no time to react to these changes, find themselves in a life or death altercation with the locals.

Starting on this issue, Jeff Lemire is joined in writing duties by Ray Fawkes, and the end result is such a seamless product that I have no choice but to praise both.  Continuing the long-form format of the run, the pair have skillfully reintroduced the characters for new readers while utilizing the baseline as a foil for story developments later on in the issue.  Each character is still allowed to behave and react in the manner that best suites their personality, even if it is at odds with their fellow teammates, an angle that has endeared the title to me as this stew of magical misfits struggles against itself as much as external antagonists.  The story though, while less than awe-inspiring at first glance, is given quite a bit more kick by the setting removing a defining characteristic (and giving it right back for at least one) from each one of the characters; creating a mirror view of each that should continue to play havoc with this loose-knit team over the course of the arc.  My only concern, and I will fully admit it to being based off of conjecture, lies in pacing.  While the story progressed, it did so in very small steps; which does fill me with a little apprehension about the length of the current story arc as so little has been revealed in the setup issue.

Mikel Janin’s artistic stylings continue to do a great job of keeping up with the fantastical characters and settings that they find themselves in.  His ability to convey scope of size, as well as magnitude of strength, within the panels through perspective alone are sincerely commendable.  Unfortunately, this particular issue does not hit the high bar he has set for himself in previous efforts, as there are a few characters that look slightly off-kilter and distorted throughout the book.  This may have been to exaggerate the changes each undergo in the new land, but it felt like it went too far in some instances and gave an impression of clubbing you over the head with its subtlety.  Overall, a more than adequate job, but his own exemplary efforts in previous issues have spoiled me to what I like to see from his pencils.

I say check it out.  It doesn’t get a full ‘buy’, as those not interested in the magical corner of the DCU will not find much to change their mind just yet, but it does offer quite a bit of promise that things may shift in that regard.  Those who have been following the title, or even casual fans of the characters themselves, will find a great setup for the newest arc; and a humorous, fun, and intriguing story along with it.  The next issue will really go a long way in determining if Lemire and Fawkes have successfully pulled another entertaining arc of JLD out of their hats.