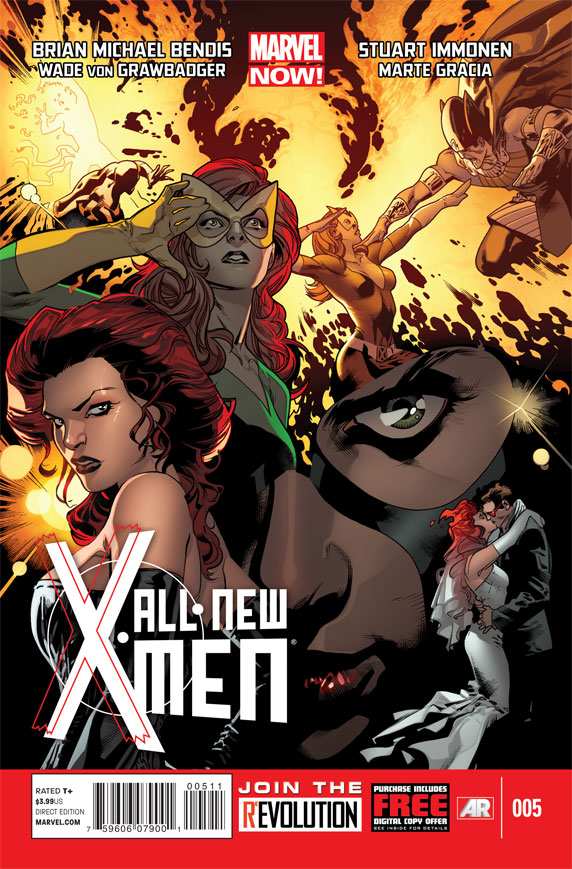 The first story-arc of Brian Michael Bendis’ All-New X-Men comes to a quasi-close with issue #5! Several storylines are resolved or redefined in this issue, setting up the upcoming three-issue arc that features David Marquez (Ultimate Spider-Man) on art duties rather than Stuart Immonen. With issue #5, Bendis and Immonen fill the book from cover-to-cover with emotional resonance and character development, particularly for the Young Jean Grey.

Last issue left off with Blue Beast in cardiac arrest and Young Beast rushing in to save himself from future death. Bendis provides some closure to the Beast-Beast medical mishaps storyline whilst incorporating some wonderfully confuzzling self-referential humor between the two McCoys. Some will probably argue that the resolution is unnecessary to the overall X-continuity, but the development does authenticate Young Hank McCoy’s brilliance and solidify the “All-New” moniker in the title. Regardless, Immonen’s handling of the reveal is gorgeous, and his artwork is once again the saving grace when the script gets a little wonky.

Case-in-point: The opening two-page spread features Young Jean Grey linking Blue Beast and Young Beast through her burgeoning telepathic powers. Immonen frames the panels with golden decals and creatively places the picturesque, uneven panels on the page. It’s all stunning to look at, and then you realize that Old Blue Beast is totally making eyes at Young Jean Grey and remarking that her Marvel Girl costume (re: short Green mini-dress with plunging V-neckline) is his favorite Jean Grey costume. Even when Jean Grey tries to chastise him for messing with time and space, Old Henry McCoy can’t stop commenting on “how good it is to see [her].” It’s a strange moment, and I can only hope that Beast still somehow ends up the anti-villain of this series akin to Scott’s turn as the anti-villain in Avengers Vs. X-Men. Of course, this time, Beast will deserve it because he’s creepy and bitter.

The other ongoing question about the entire series has been the role of the Young X-Men. Questions about their place in continuity and the consequences of their presence in the future have abounded since All-New X-Men was announced last Summer. Bendis shows his hand in this issue, suggesting that Blue Beast’s original plan was simply to show the Young Scott Summers his future, make him and his older self feel really guilty about everything, and then mutant teens back to the past where Xavier would just mind-wipe their journey. Thankfully, this isn’t what goes down in this issue. What does go down promises some fascinating storylines down the pike. While the mind-wipe option still seems to be the easy way out for this whole series, at least Bendis and Company are serious about using the Young X-Men and their presence in the current timeline to their fullest potential.

Check it out. Bendis, Immonen, and the Art Corps have put together one heck of a rapid-release run of one of Marvel NOW!’s flagship titles. Over the last month and a half, Bendis has constructed a new status quo for the X-Universe that is both progressive and respectful of past continuity. Issue #5 provides some excellent closure to the initial storylines and looks ahead to some interesting opportunities in the book’s future. It’s clear that the Young X-Men will be staying with us for a while, which is fortunate considering Bendis’ strong grasp on the Young Jean Grey. And the artwork is brilliant! Keep your eyes out for an absolutely breathtaking double-page spread featuring Jean Grey’s entire comics history that will be my desktop background for months to come.