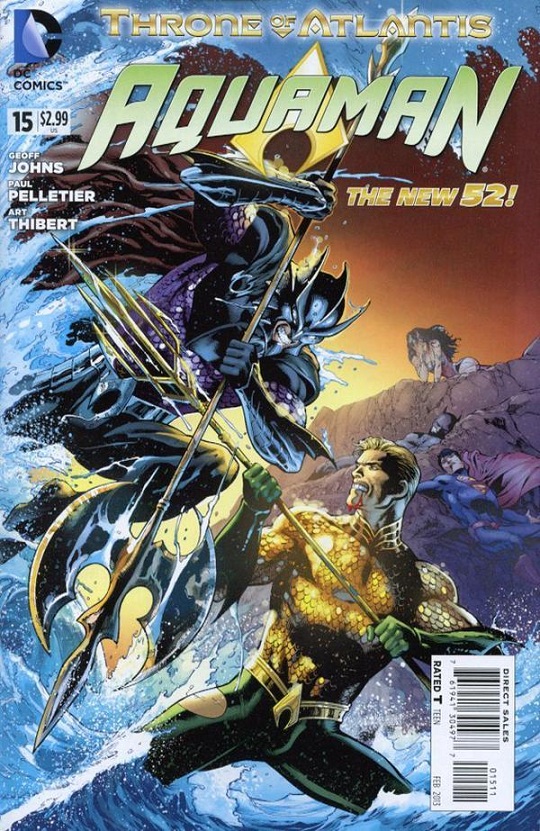 A funny thing happened on the way from September 2011, Aquaman became an engaging and viable A-list hero.  That’s right, he still goes vwoomvwoomvwoom, ‘talks’ to fish, and splashes around in the water; but he’s also ramped up his strength immeasurably, gained an intriguing supporting cast, and developed a personality that exudes both confidence and doubt all at once.  Add it all together and the new Aquaman title has become a veritable sunken treasure of story-telling opportunities.  So much so that the first A-list crossover, Throne of Atlantis, centers on this previously pine-riding member of the League.  But does Aquaman #15 show that he can handle the pressure (and we’re not talking ocean floor psi’s here) of his new headliner status?  Indeed it does.

Picking up right after Justice League #15, Arthur and Mera do what they can to save the residents of Gotham City from the devastation left behind from Atlantis’ alpha strike.  Working alongside Batman, the two League members make their way back to the Watchtower, dodging Atlantean assassins in their path; all in an effort to rendezvous with Superman and Wonder Woman, who have Arthur’s closest thing to family, Vulko, under their protection.  Trying to rationalize with the rest of the Justice League on the next course of action that needs to be taken, Arthur finds an unlikely ally, and is allowed to pursue negotiations with his brother Orm and the people he once ruled in peace.  But how much further can the situation escalate before a promise must be broken?

This issue of Aquaman may as well be titled Justice League 15.5, because it feels as though the rest of the League are playing their role in the larger story at hand, which is as it should be in a shared universe.  Flash is still not present, but it is mentioned that is due to a ‘primate situation’ he is handling in his own self-titled book.  I understand that only having two books from the same author come out this week assists greatly in the illusion, but holy cow does the DCU feel like a cohesive self-aware setting after reading these two titles back-to-back.

Arthur is properly portrayed as deeply conflicted in this issue.  Struggling to honor the promise he made to his fellow teammates not to keep secrets, trying desperately to justify the actions of the Atlanteans he once ruled, and doing everything in his power to try to stop a war from erupting between the two worlds of his family and his friends.  A war that even he cannot know which side to take.  The dialogue stresses the tone of his conflict quite nicely most of the time, but comes across a little heavy-handed as the issue draws to a close.  What Johns excels at though, is allowing each and every one of the characters to process the external stimuli of a situation in their own manner, and respond in kind; a tactic that provides a bevy of strife and story elements for the short and long-term alike.

On art duties, Pelletier had the unenviable task of following Reis’ staggeringly beautiful run on the series, and does a commendable job of finding his own path while maintaining the aesthetics that have made Aquaman such a visually appealing title.  While there are a pair of slightly warped panels, especially in facial design, they only stand out as an anomaly due to the solid work he puts out through the rest of the book.  What cannot be faulted is his sense of staging, with shots that capture everything from the weight of decisions made, the relief of reuniting friends, and the menace of threats above and below the waves.

Buy.  If you have not given the new Aquaman title a chance yet, even with the positive clamoring of others, this is a prime opportunity to do so; especially if you are reading Justice League.  This looks to be an essential read to keep up with the team book’s happenings at the very least, and I’m fairly certain you may even find something you like outside of that arena.

Jumping-On Point:  You can hop on here, but I greatly recommend grabbing Justice League 15 and starting there before reading this issue.