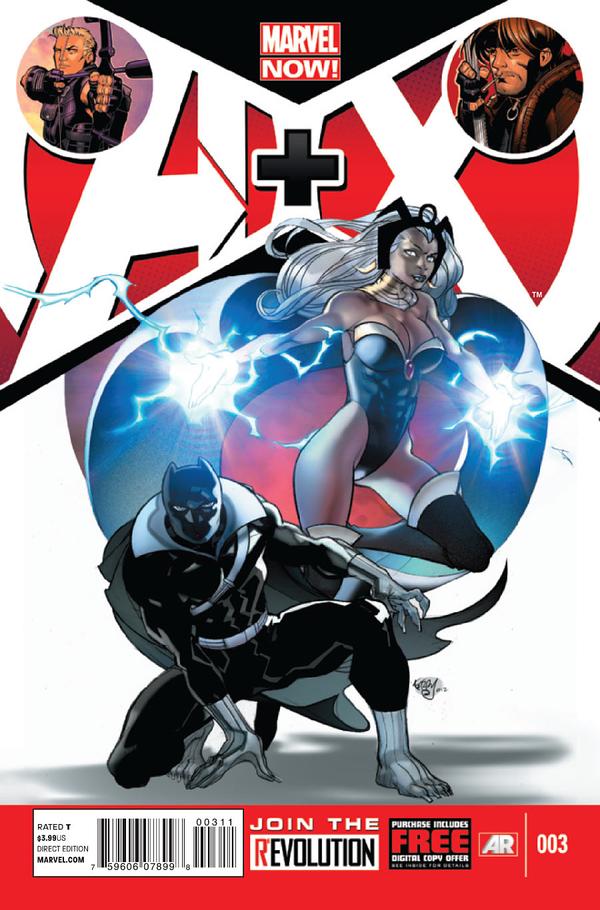 In this month’s issue we are given two stories having to do with the heart, although for two completely different purposes. In the first story, which is a team-up between Black Panther and Storm, Panther is trying to rebuild Wakanda while fighting off the invading AIM. While all this is happening, he’s also being pushed into a new potential relationship after his previous marriage fell apart. The only issue there is that his ex-wife can control the weather, and can be a little bit on the jealous side. The second story, starring Hawkeye and Gambit, has the two teaming up (sort of) to take down an underground alien that has taken a woman hostage. I say sort of because both men are in a constant game of one-up due to the hostage being incredibly attractive. And when you get two men known for hitting on anything with a pulse together and have them compete? Their egos are going to clash.

The Black Panther/Storm story is a mess from start to finish, but I guess I should have known when I saw the pairing. While I did read Avengers vs X-Men and know of what happened between Black Panther and Storm, to the reader who reads this title specifically because it stays away from continuity, they’ll be left scratching their heads for most of the story. It starts off well enough with some cool Panther vs AIM action but it slowly turns into a lovers spat that ends abruptly and without any real resolution. They don’t even really team up, which is disappointing considering that’s the whole point of the book. Definitely the weakest story to come out of this series so far.

The Hawkeye/Gambit story is an entirely different beast. It’s genuinely laugh-out-loud funny, with both men playing up their lovable arrogance and larger-than-life egos to hilarious results. Asmus, the current writer of the Gambit ongoing, has a great grasp of his character and how to make him work in any situation. I was surprised at how well he wrote Hawkeye though. It’s nowhere near the level of the Hawkeye ongoing, but he works well with him in the context of the story, especially playing off Gambit. I also loved the silent nod to the SNL Avengers skit regarding Hawkeye (think amount of arrows brought), something I didn’t think I’d see show up this soon. Simple, funny, well written story.

In terms of art, both Ferry and Tan do a fantastic job. Ferry’s art on Black Panther/Storm is the best part of the story and uses an almost water color-esque pallet that fits with the style of the story really well. Faces are highly expressive, backgrounds are detailed and the action has a great flow to it. My only complaint is that a few of the body positions look a little unnatural or rigid but besides that it’s really good. Tan’s art on Hawkeye/Gambit is a nice contrast to Ferry’s art by having a loose, sketchy style that works incredibly well with this more action-packed story. Colors are vibrant, with dark colors being the center of attention (appropriate considering who’s wearing dark clothes) and the action has a nice chaotic flow to it that works with the constant one-up game that both men are playing. Facials can be a little wonky at times but otherwise a great job from him as well.

The third issue of A+X sufferes from a common problem that books with multiple stories have: one story being a lot stronger than the other, with the weaker story dragging down the rest of the book. The Black Panther/Storm story starts off interesting enough but doesn’t really seem to go anywhere and just tapers off at the end without any resolution. The Hawkeye/Gambit story on the other hand, while extremely simplistic in its premise, is a laugh-out-loud hilarious story that showcases both of the heroes personalities well. But half a good book is still only half a good book, and at four dollars that’s a hard sell. If you’re interested, flip to the second story and read that, but otherwise I can’t really say that this issue is worth your money.