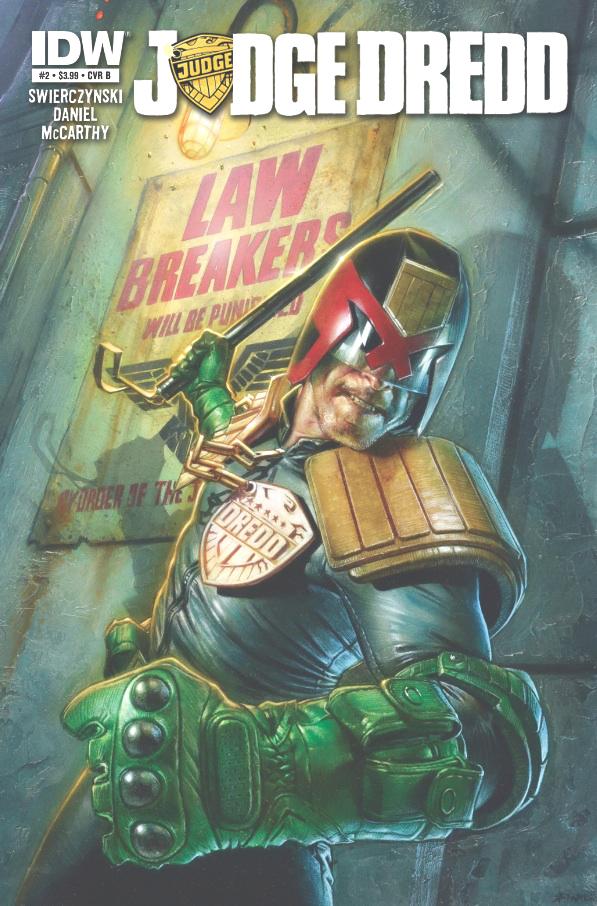 The first issue of IDW’s relaunch of Judge Dredd was a great surprise. Featuring strong writing, even stronger art and catering to fans new and old, it left me excited to see where this series was going to go. In the second issue we are introduced to Judge Anderson, the fan-favorite character who made an impact earlier this year as Judge Dredd’s partner in the “Dredd 3D” film. Featured in both stories this month, is Anderson used well, or is Duane just cashing in on the popularity of the movie? After reading the second issue I can safely say that I loved Duane Swierczynski’s use of the character and I trust Duane completely with this fantastic book.

The first story, “Cover Me,” follows Judges Dredd and Meyers as they break up a block war caused by last issue’s malfunctioning robot situation. Shortly after, Meyers is attacked and Dredd takes him back to his home to make sure he heals up alright. While there, he spots stolen evidence and decides to look into Meyers to see whether he’s gone corrupt. Despite finding substantial proof of corruption, Dredd brings in Anderson to find out once and for all if Meyers is corrupt. When they discover he is in fact clean, Dredd and Anderson decide to search for the person that’s been setting up Meyers.

The second story, “The Good Parts,” is about a woman who wakes up next to a dead body with the murder weapon in her hand. Never a situation someone wants to be in. After gaining her composure, the woman tries to clean up the crime scene only to have Judge Anderson walk in, who’d apparently been alerted due to her thoughts. Anderson checks her and sees that she has no recollection of the murder, but upon discovering a note and a key underneath the body, Anderson and the woman decide to see where the clues lead them.

Both stories this time around are stronger than the previous issue. “Cover Me” features a great mystery with an unexpected twist and acts as a great second part to the overarching robot malfunction mystery that was set up in the first issue. Dredd and Anderson have a great natural chemistry and it’s nice  to see a more detective side to Dredd, instead of the usual “shoot first, don’t ask questions” method I’m used to. It was also nice to see Dredd sticking his neck out for Meyers, showing that while he is gruff and angry on the outside, he does care about those he works with. My only issue with “Cover Me” is that some parts seem slightly rushed, especially towards the end, but overall “Cover Me” is an extremely well done story. “The Good Parts” is shorter (only about 6 pages), but it’s still really well done. Not only does it not focus on Dredd, instead on Anderson and this mystery woman, but it also shows one of the more intriguing ways drugs are used in Mega-City One. Although short, it gets its point across nicely and I like that.

The art from Nelson Daniel on “Cover Me” is extremely solid. The way the bright colors of the Judges contrast with the dark of the city is just as well utilized as it was in the last issue and faces are actually a lot better this time around. Granted there were only three Judges used in “Cover Me”, with only one wearing a helmet all the time, but a nice differentiation in characters is something I really appreciate. The action, albeit brief, is also well drawn and the way the panels flow together is really nice. Overall a great job by Daniel. The true star of this issue though comes from Brendan McCarthy and his art on “The Good Parts.” The whole story is a stylized, drug-induced acid trip and it shows in the artwork. Negative space is occupied by trippy pink, green and black lines, with the borders of the panels varying in color as well. Inside the panels, the same three colors (along with yellow for Anderson’s hair) are heavily used and everything feels dirty, grimy and chaotic. It’s a true feast for the eyes and is really one of the big takeaways from this issue.

Judge Dredd continues to be a fantastic use of your four dollars. Whether you are a fan of 2000 A.D, Dredd 3D, or just someone looking for a good action comic with a good dose of mystery, you really can’t go wrong with this series. It’s obvious that Duane Swierczynski cares about the universe and all the books that came before it, but he’s also determined to carve out his own path and it seems to working for him so far. With great art and a great story I wholeheartedly recommend this book and you should go out and buy it.