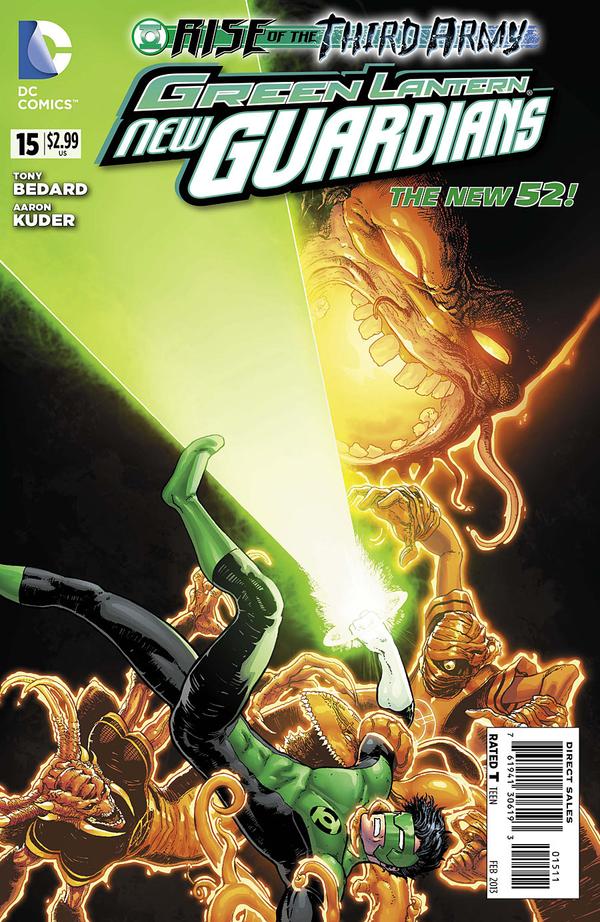 ‘Tis the season of giving, so I can think of no better time to learn the valuable lesson of taking.  Acting as headmaster in these lessons, Larfleeze, Christmas’ biggest fan, shows up to do his ‘Finding Nemo‘ seagull impression and teach us the true meaning of the holidays.  But, will ‘Mine! Mine! Mine!‘ be good enough to make New Guardians #15 ‘Yours! Yours! Yours!‘?

Following Kyle in his quest to master the power of each emotion, we find ourselves with only two left to go before he can make his rainbow connection; the violet power of love, and the orange light of avarice.  Making their way to Okaara to confront the lone Orange Lantern for training; Kyle, Carol, and Arkillo find that the greedy Larfleeze will be a difficult individual to barter with.  Wanting to make a bid of their own, the Third Army make their play against the New Guardians as well, leading to disastrous results for those fond of the color blue.

I’ve actually been enjoying these issues dealing with Kyle Rayner mastering his emotions.  Recently going back and reading the fourth Earth Lantern’s adventures since the Johns GL-universe began, it immediately struck me that Kyle’s actions were almost always driven by emotions other than sheer willpower.  Now, facing a foe devoid of all emotion, it would only make sense that he would branch out and embrace all of the facets that make him who he is, drawing strength from them as well as acknowledging the vulnerability inherent in their nature. While tangentially related to the ‘Rise of the Third Army’, I will not be surprised when his trials come to fruition at the culmination of this mini-crossover as a critical instrument in turning the tide.  Bedard has been able to have some fun with all of the characters, making them the emotional caricatures needed, while also breathing a sense of balance to each one of them; tempering their respective extremes and offering multiple layers to each.  Larfleeze for example, is given pathos in this issue, undercutting the comedic relief of his greed and giving the character more dimensions to explore in the future.

Kuder’s artwork shines in action panels, detailing the Orange Lantern Corps beautifully in large splashes to great effect.  Unfortunately, for a book dependent on emotions, his facial expressions are not conveyed as well in this issue as he has done previously.  Counter to that, his style and framing changes for Kyle as he cycles through various emotions work to great effect, and easily pick up any slack through their actions.  While not as intimidating as in Green Lantern #15, the Third Army itself appears to be seeing a refinement as the event continues, as they are much more formidable in appearance than they have seemed in previous issues.

If you are looking for a Lantern title broader in scope than Hal and Sinestro (and now Baz) in Green Lantern, but without as daunting a cast as the hundreds in Green Lantern Corps, New Guardians is aimed directly at you.  The entire run has acted as a council of the various Corps, but the recent issues since #13 have ramped up the entertainment value incredibly to bring a fun and introspective adventure to those reading the book.

Jump-On Point:  New Guardians #13 would be your primary starting point.  Those acquainted with the DC cosmic universe can easily hop on here though.