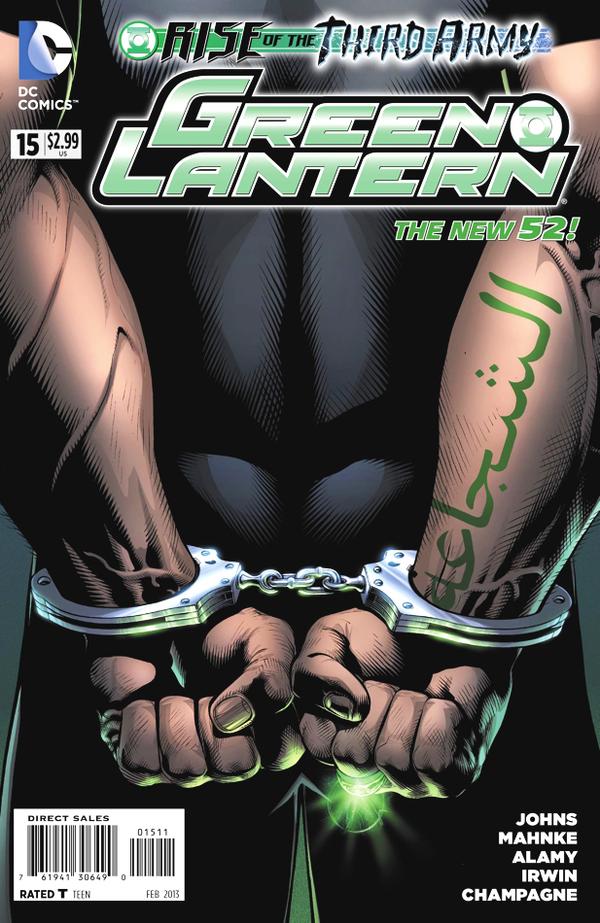 As Kermit once said, it ain’t easy being green; and he was never framed for an act of terrorism, hunted by the FBI, or attacked by a swarm of individuality-consuming space monsters.  So it would come as no surprise to me if our newest Green Lantern, Baz, would have a few ‘conversation enhancers’ of his own to add to the little muppet’s musings after the mess he finds himself in during issue #15.

The fifth segment of the Green Lantern title’s part in the ‘Rise of the Third Army’ crossover, issue #15 starts off with a quick reminder of how widespread the threat is to the galaxy as well as Earth.  Closer to home, Baz continues his efforts to clear his name from the carbomb he inadvertantly found himself a driver of; tracking down the original owner of the vehicle to see if he can find out where it was initially stolen from and continue his investigation.  Sensing a member of the Corps nearby though, the Third Army wish to pay a visit to the untrained Lantern as well, leading to unexpected alliances in a gambit to escape alive.  As if that is not enough, the fate of Hal and Sinestro is revealed, as well as the surprising identity of the First Lantern.

This crossover has been going on for some time, and on one hand, I feel it deservedly should.  It’s a benchmark moment in the recently revitalized history of the Corps, and brings to a head the underlying threat that has been built through Johns’ entire run.  On the other hand, it feels as if it has gone on for some time with minimal forward momentum; but this may be due to the doubling of titles that Lantern-centric events now encapsulate.  While things inch ahead by giving Baz a new mentor, defining what has occurred to Hal and Sinestro, and introducing the Third Army to the new Green Lantern; I finished the chapter quickly and with a strong urge for more, a compliment and criticism all at once.

As an aside, I was all prepared to make references and quips to Shyamalan’s ‘Signs’, as it appears that basement doors continue to be a bane to all hostile alien invaders; but a quick comment at the end of the issue at least gave me enough to let it slide.

Someone who did not let anything slide though was Mahnke, as his artwork continues to impress month in and month out.  The Third Army looked as menacing as they have yet in this issue, though I feel Sinclair’s colors may have assisted greatly in that arena.  The sickly green glow of the alien brainboxes provided moody swaths of shadows across the faces of the army, increasing their unsettling nature while providing a warped mirror to the Corps light.  It is always difficult to find much to criticize about the art in this title, and this issue proves to continue in that regard.

Tough call, but going to give it the Buy.  Establishing a new character always takes time, and Johns’ newest Lantern Baz is an intriguing addition overall that honestly brings something new to the table.  Issue #15 provides the new baseline for Baz, while keeping all of the other balls that make up the overarcing plot in the air, if not pushed forward slightly.

Jump-On Point:  I would recommend reading Issue #0 and then proceeding from there, but that single issue would bring you pretty close to caught up if you wanted to leap straight from #0 to #15.