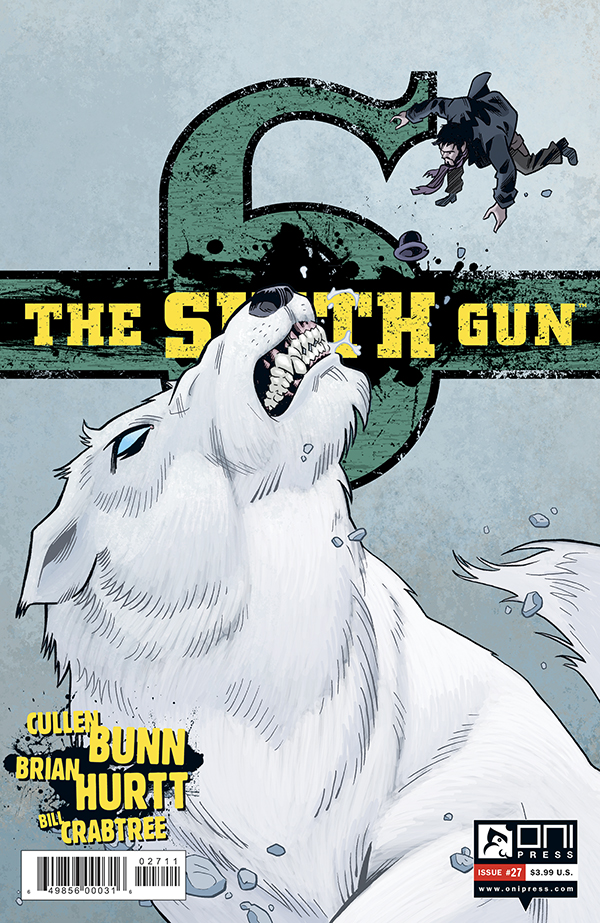 Full disclosure, I absolutely adore this title from Cullen Bunn and Brian Hurtt.  So, in the interest of maintaining professionalism, I’m going to go ahead and get this out of the way now:

Ahem.  For those new to The Sixth Gun, it can best be described as a supernatural western, though that descriptor falls short of the story’s actual scope.  Six mythical and otherworldly powerful pistols, five of which are in the possession of the gentleman gunslinger Drake Sinclair and his determined travelling partner Becky Montcrief, make their way across the 1800’s American landscape; pursued and coveted by everything from zombie Confederate generals, old-west versions of prognosticating mummies, religious zealots, Louisiana voodoo Loas, and countless others.  All seeking to bring the Six together to enact the true purpose of the weapons, and each with motives to use the power bestowed for good and ill alike.

Issue #27 is midway through the fifth arc of the series, where Becky and Drake have found themselves imprisoned in the icy ethereal realm of a Wendigo that has plans of his own for the pistols the pair carry.  Confronting the beast by threatening the villagers it has imprisoned to tether itself to our world, Drake is forced to bargain with the spirit of the winter storm to free the people it has ensnared, and allow both he and Becky to continue on their quest.  Meanwhile, in hot pursuit of the trapped duo, a tentative alliance between the bandit Kirby Hale (out to steal the guns to sell to the owner of the sixth unaccounted weapon), the Sight gifted mummy Asher Cobb (trying to gather the guns to fulfill their destined purpose), and the occult trained ex-slave Gord Cantrell (seeking to destroy the cursed guns once and for all), evade capture from the pursuing Sword of Abraham (a religious sect out to prevent the Six from falling into the hands of evil) while tracking their mutual quarry for their respective reasons.

If the above relays anything, it is that this is probably not the best issue to start off on.  Divorcing myself from previous knowledge, it would be a slightly confusing but intriguing read, as the intro page details practically all of the main players and the plot needed to date.  Bunn’s dialogue is crisp and fun, with the driving factors of each person and faction providing melodrama to spare as the groups jockey for position to realize their goals; allying with and double-crossing each other along the way.  The plot is epic in scope, while providing just enough mystery in each character’s personality to keep the reader unsure as to how they will react to each situation, allowing for tense conversational and personal moments throughout the journey.

Hurtt’s artwork is clean, simple, and elegant; with silent panels capably propelling the story forward as well as driving home the action-packed gunfights that run rampant through the overall story.  Meanwhile, Crabtree’s color work is on a level of its own, breathing energy into the panels while adeptly avoiding too much white space, as is often troublesome in snow-heavy landscapes.  The two work together with astounding results to date, and this issue is no exception to that streak.

In all fairness, on the negative end of things, the story has slowed dramatically in the last few issues.  This chapter appears to be pushing the story out of the snowy quagmire it has been languishing in of late though, and I can easily see the reasoning behind trapping Drake and Becky together from a storytelling vantage point.  Unfortunately, after the frantically paced first 24 issues of insanity, it was a hard brake to come off of that to hit this comparatively glacial (pun intended) stretch of the plot.

Buy.  Even if you have not read an issue prior (though I highly recommend doing so), or do not traditionally care for Western-style books.  As of 2011, I had absolutely no interest in the Western genre; but after joining in late to The Sixth Gun last year, I found a stern reminder for myself that a good story is a good story, regardless of its trappings.  And The Sixth Gun #27 is just that, another good story within a long run of good stories.

Jump-On Point:  Issue #27 will be a little rough, but #24 acts as the first in the arc and an excellent primer to bring you into the fold.