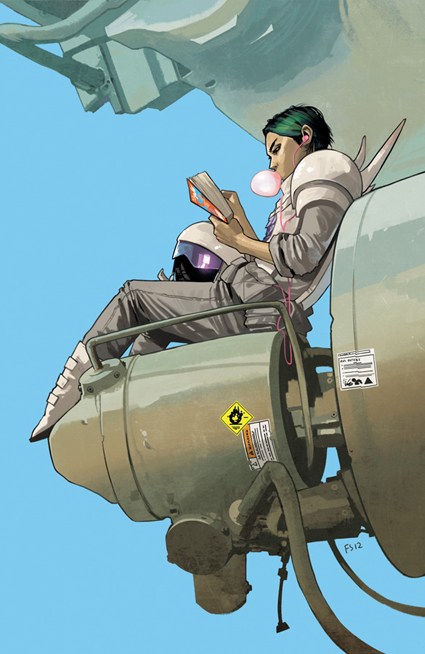 Saga always leaves me speechless. Vaughan has the power to take a story and have it just stab you right in the heart. Though I know that Vaughan’s story is able to stand alone, Staples’ artwork drives home every emotion and amplifies Saga. This team of creators is spot-on, and their latest issue continues in their tradition of giving us a lot of bang for our buck.

When Marko’s parents show up on the ship and beam Izabel to the surface of a strange planet, Marko and his mother must hunt down the ghostly babysitter. While on the planet, they quickly find out they have bigger problems than a lost ghost, both within their relationship and in their environment.

Alana and Marko’s father don’t know what to make of each other. She immediately distrusts him based on his actions towards Izabel, but we soon find out that he has very little life left. This seems to change everything.  Alana and her new father-in-law begin to build a relationship while Marko and his mother bicker and argue over the fact he married an “enemy”.  I just love the family dynamics Vaughan chooses here. Marko’s mom is complaining about his wife while fighting a gross naked monster critter. It’s obviously that important to her.

My favorite part of this issue (and there are many great parts) is how Alana and Marko meet. I never pictured Alana, a fighter and a practical woman, reading what amounts to a romance novel. Her happiness and youth at the beginning of the issue, before she meets Marko, is new to me as well. She was a different person, a woman who held a guard position, bored with her life, just trying to escape for a few minutes. Her whole body changes the moment she meets Marko. It’s as if, in the span of one glance, grew up.

Saga is a buy. Even if you haven’t been reading from the beginning (which is a crime! Go buy the first volume!), it is still worth your investment. There are a lot of great things going on in this series, and this issue is no exception. Great writing, great artwork.