It’s the holiday season and as it turns out, Shenani-Girl has a little bit of time on her hands to answer your questions. Whether they’re about comics, life, movies, various geekery or other things, get your questions into Shenanigans for a brand-new Dear Abby style column that’ll be up as frequently as our podcasting superhero can handle. You can send in your questions to stephaniecooke@talkingcomicbooks.com or via Shenani-Girl’s Tumblr page (all responses from Tumblr will be posted on the site).

So, it would seem that my hair has reached the length to be slicked back like every wealthy movie villain from the 90’s? Good or bad. If bad, then what should I look to do with it to “woo” the little lady?

-Michael Douglas from that movie. Which? Um, pick one. 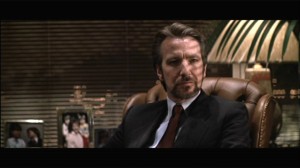 Ok, but let’s get real here: is it a bad thing? I guess that depends on whether or not your little lady is into bad boys.

Oh man, that sounded dirty. It was kind of intended to and then after I wrote it down, it just sounded so much worse. I suppose I could hit the Delete button, but whatever. Just know that I meant if 90s villain is what you’re going for and what your lady is into, then stick with it.

Some people can rock that look, some people really, really can’t. Ask your friends to tell you honestly if your hair is ridiculous or not. If you have a cool lady friend, ask her opinion too. It’s really hard to say unless you want to give us some photos to go off of.

PS – I know that Hans Gruber was a villain from 1988, but he was the first one that popped into my mind when I read this question, so deal with it. Late 80s/Early 90s are pretty well the same thing anyways.

Ok, so they’re really not, but whatever.

PPS – I also realize that Die Hard starred Bruce Willis, not Michael Douglas, but we’re going to deal with that too.