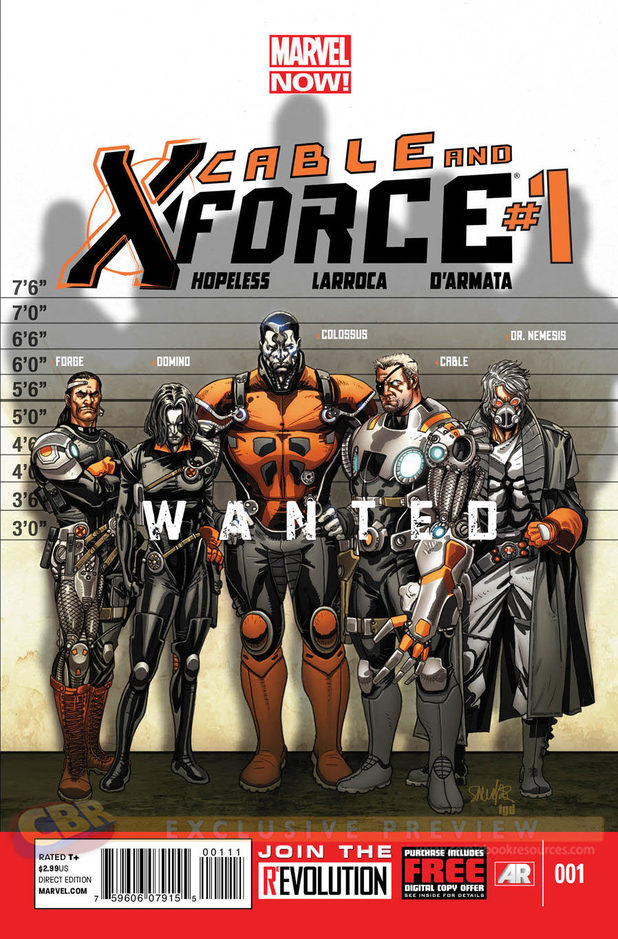 I have expressed many times, both in print and on the podcast, my dislike for the character of Cable. I find his design to be embarrassingly 90’s, his time travel gimmick to be redundant, and his use in more modern story lines, like Avengers: X-Sanction, to be sub par at best. So, you can imagine that my initial response to a book called Cable and X-Force was one of disinterest to mild disdain. However, since that announcement the character has been involved in two stories I very much enjoyed, AVX: Consequences and Marvel NOW .1, and so my attitude became one of mild interest. Now Dennis Hopeless and Salvador Larroca’s book is here and Cable and X-Force is, despite a few stumbles, at its core an entertaining read, with great characterizations and intriguing story hooks that have me interested in coming back for more.

Cable and X-Force starts out with one of my favorite story devices of all, the flash forward. Our anti-heroes are in a destroyed building, surrounded by dead bodies, with we as reader’s aren’t sure if the the X-Force is responsible. The situation is made worse by the arrival of the Uncanny Avengers, led by Cable’s uncle Alex Summers (a.k.a Havok). The exchange here is full of emotion and even a little humor. It’s a great scene and one that sets the “action movie with a heart” tone of the book immediately.

It’s a great start, but it’s impossible to continue without first talking about where the book comes up short. Right off the bat, there is something confusing about the very conceit behind Cable and X-Force. It’s not the fact that the time trotting mutant is in the group, it isn’t even Marvel’s decision to spin the heralded X-Force franchise into two books, no, it’s that this number one feels less like the opening salvo of a new series, and more like an installment in middle of an ongoing story line.

The root of problem lies in the way information about the various characters is disseminated. As I mentioned Hopeless’s script jumps around in time, beginning with the team assembled, and then flashing back to a time before our band of outlaws were mustered together. Except, even in this before time the group seems well aquatinted with each other. It makes some sense that Cable and Forge come as a package deal, but why does super thief Domino know where Cable is and what is her history with him? I may be showing my ignorance to comic book history by asking that question, but I found myself asking this question constantly. This storytelling miscue is the book’s biggest downside, and it’s one that could turn off lapsed or new readers, but it doesn’t provide a big enough distraction to take away from what is otherwise a very solid freshman outing.

While the prior relationships between our protagonists may be slightly muddled, the character work being done by Hopeless in Cable and X-Force is spot on. Cable is a vibrant, funny, and classically bad ass leader, Domino is witty and sharped tongued and Forge is, well, Forge. Hopeless writes Cable with the kind of self aware attitude that can get too winky if left unchecked, but here the writer is able to use it just enough to laugh at the character’s past without discounting it. The moment where Forge outfits our hero with a replacement arm, is an excellent example of both outstanding writing and the ability of a book’s art to truly elevate a moment. The narrative also features quite a lot of time spent with Cable’s daughter Hope, and her inclusion goes a long way to making the entire story feel more grounded.

Salvador Larroca does a great job of fixing one of my largest gripes with the character of Nathan Summers, his design. Larroca’s rendition, while still undeniably Cable, loses the cartoonish over sized frame and much of the overwrought techno attire, in favor of a more streamlined and modern approach. I’m not sure how old school fans will feel, but to me, it makes it much easier to take him seriously as a person and it’s a big reason why I remain interested in this book.

Buy It – Cable and X-Force is not a slam dunk as it relies too heavily on prior knowledge of the protagonists involved, but it’s also a surprisingly strong character piece that has begun to turn me around on a hero I have never much cared for. The script does feature a little too much cursing for my taste and some unwelcome foreshadowing of another “Cable is sick” story line. However, writer Dennis “the best name in comics” Hopeless has a great voice and mastery of tone, Salvador Larroca’s art is stellar, and so I’m on board for another go around.