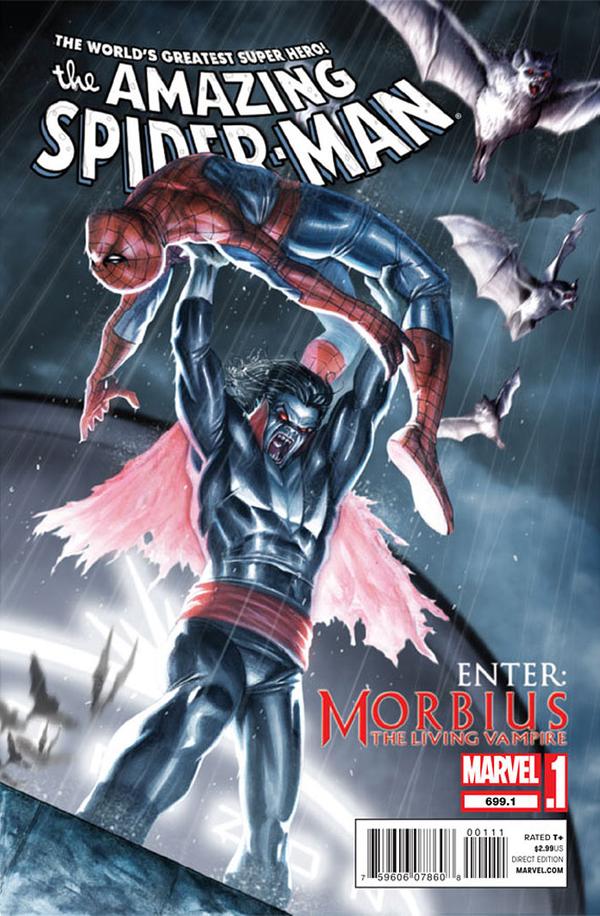 As we inch ever so close to the sure to be explosive and controversial 700th issue, we are interrupted by a point one issue that doesn’t forward the current plot, rather acts as a backdoor pilot to the upcoming Morbius: The Living Vampire series that’s starting next month. Does this point one issue derail the current momentum that the previous two have created or does it work in the context of everything else going on? Call me ever the optimist but I actually enjoyed this issue. If nothing else it made me interested in a Morbius ongoing, something I wouldn’t have been able to say before.

The story takes place right before the end of issue #699, with Morbius begging Doc Ock (aka Peter) to let him out of the cell and being promptly denied. When the doors open anyway a few minutes later, Morbius attempts to leave. He’s stopped cold by Curt Connors who ridicules him, asking “Where do you think you’re going?” This causes Morbius to reflect on his life and what led up to his current situation.

As a character, I’ve never really been a big fan of Morbius. He looks scary and seems like he would be a big threat, but Spider-Man always seems to dispose of him so quickly that I never really get a chance to care about him. That’s why it was such a pleasant surprise that this issue was as good as it was. Not only did it make me like Morbius, but it made me think about him in a completely different light. Joe Keatinge writes him as a highly intelligent but sheltered man living with the demons of his past. His narration is tragic, just like most of his life, and it’s easy to see why he ended up the way he did, even if I don’t agree with his methods. I realize his origin has probably been told numerous times, but I really like what Keatinge has done. Now I really want to read the ongoing.

The majority of the artwork is done by Valentine, with Marco doing the first two pages (set in #699 time). Marco’s art, albeit brief, is always beautiful to look at and it makes me wish he was still on an ongoing. That’s not to take anything away from Valentine though. His artwork has a distinctly old-school feel, full of shadows and black with bits of bright colors thrown in. The way he contrasts the dark with the light is fascinating, as it really conveys a sense of emotion you’re supposed to feel with the scene that’s playing out. Besides one or two facials I’m not too keen on, this really is a great art job through and through. It’s just a shame we didn’t get a taste of what the ongoing artist’s vision for the book was.

While not important to the current story, issue #699.1 works as a great backdoor pilot for Morbius: The Living Vampire. If you were hesitant about the book or needed convincing, this issue does a great job of making you want to care. With great writing and art throughout, it’s an issue worth picking up, even if it’s only a distraction to hold us over until #700 comes.