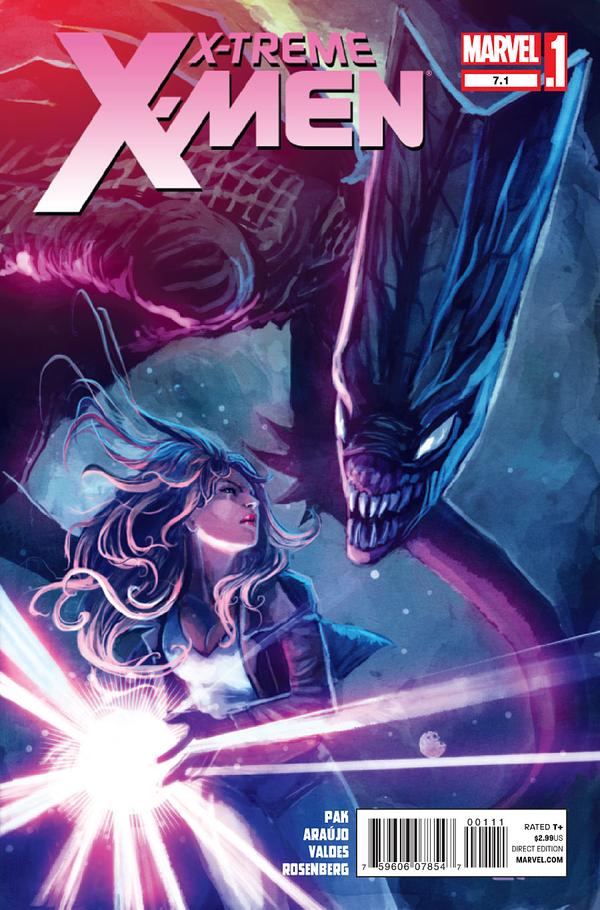 When I first heard about the oddly titled X-Treme X-Men featuring Dazzler and alternate reality versions of Wolverine, Emma Frost and Nightcrawler, I was hesitant to say the least. With a wide array of X-Men titles already out there and featuring a lead character that people are extremely divided on (Dazzler), it was hard to argue why this book needed to exist. But as a fan of Greg Pak’s work on Astonishing X-Men I decided to give it a chance and it was one of the best investments I’ve made in a while. Inside the slightly out there premise lied an incredibly clever and unique title full of action, humor and heart. If nothing else the book keeps me on my toes and in an age where predictability in comics can be a problem, this book shines.

The story follows the team, now Frost-free and featuring Sage from an all-robot universe, trying to return to the disembodied Xavier head after being separated in the previous arc. While traveling through space they come upon a Brood controlled Acanti Skywhale Xavier who’s about to attack a world without an Xavier. Despite being on a bit of a time crunch to get back to their Xavier, they decide to head to that world and stop them, but what they find when they get there might surprise them.

While I would wholeheartedly recommend reading the previous seven issues in the series, this point one issue succeeds at introducing new readers to the series without feeling like filler to those who have been reading since the beginning. For experienced readers, the twist gives clarity on the time frame of the comic as well as going back to some previous plot points that fans might have been wondering about. For new readers, Pak does a good establishing what they’ve done so far and, while not everything is answered, it feels like you could start here and not have to worry a whole lot. Otherwise the book is hilarious, over-the-top silly (in the best way possible), full of action and ends on a heartfelt but somber note.

While the writing has been consistent since the series started, the art has been an ever-changing rotation of people, some much better than others. While it makes sense to change artists whenever you go to a new world, there have been a few issues that were really hard to look at. Araujo & Valdes’s work on this issue is a bit of a mixed bag, but has a lot more strengths than weaknesses. The characters are well drawn, albeit slightly bland, and their faces are expressive and convey emotion well, but there are a few panels where the faces look really off. The action and the Skywhale Xavier are probably the high spots of the book, with the action being appropriately colorful and chaotic and the Xavier looking like something I’ve never seen before. It’ll be interesting to see who takes the reigns on the next arc, but Araujo & Valdes did a good enough job.

If you love the X-Men but are looking for something different and unique then this is your comic. Greg Pak has done a fantastic job so far and I look forward to this comic whenever it hits the shelves. Well developed characters with heart, clever and funny dialogue and intense action set this book apart from everything else. The point one issue worked to introduce new readers to the world while still entertaining fans that have been there since the beginning. While the art wasn’t the strongest the series has seen, it still did a good enough job at getting the point across. If you’ve been waiting to start picking this book up, now’s your chance to jump on board.