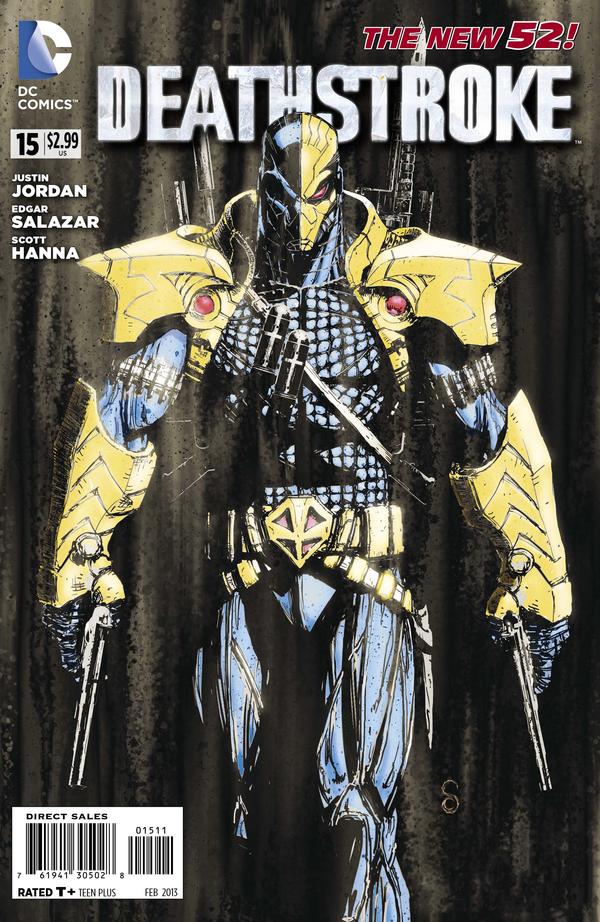 The indomitable Slade Wilson has had a tough year.  From Higgins’ first arc that saw him as the aging and physically deteriorating mercenary, determined to maintain his rightful place at the top of the heap regardless of the handicaps his battle-ravaged body put before him; followed up by the Liefeld era.  A time I can only hope depicted his second mid-life crisis, as he went from a physically and mentally tormented soldier of fortune, to a personality that represents the pinnacle of what every 13-year old male assumes to be awesome in his sole mission of sex and violence.  So it is only fair that the man who is currently defining the past of Deathstroke, as Justin Jordan is doing in the pages of Team 7, get his opportunity to also guide the future.  But which Slade will it be?

They say a story is only as good as its villain, and the new direction of Deathstroke #15 starts out with this in mind by introducing the immovable object to Slade’s unstoppable force, an un-killable tyrant who goes by the name of Koschei.  As Slade is offered the contract over dinner with his handlers, we start to get a feel for the direction that Jordan is taking the mercenary, and it is a bit more intelligent than recent months have offered.  Still overconfident, always seeking to increase his reputation, but wrapped in a slightly more aware presentation; as he at least asks why he is being hired to judge the validity of the request.  This situational awareness is also demonstrated later in the issue, as Slade and his on-site contact debate the possible aftermath of what will occur to the country even if he does succeed in his supposed impossible task.  While a welcome change to see the Terminator even use 9% of his brain, Jordan pulls up short of the inner dialogue that Higgins gave the character, striking a middle ground between the warrior-philosopher and the mindless barbarian Deathstroke has bounced between in the last year.

Issue #15 does not stray too far from the action oriented bedrock that the title is founded on though, as the back half of the issue is one extended sequence of Slade’s first attempt to complete his contract.  Full of requisite one-liners, Jordan is not taking too many risks with the formula, but rather refining the mixture to try to improve the experience as a whole.  This may turn off some who were looking for an entirely different approach to the character, while those who have just been unhappy with the execution of late may see it as a turning point in the quality of the writing and storytelling by far.

Salazar and Pinna’s pencils are serviceable through the story, but the cover really makes me curious as to how a Scott Clark pencilled issue would have turned out.  This is certainly a case of the cover not matching the interiors even slightly though.  A simple loose style with minimal expressions are functional for the action portions of the book, but the quieter conversations suffer from the blank expressions of those participating.  The layout and sense of motion in the combat sequences will be more than adequate for the action movie direction it appears to be going for, but this first outing does not take any risks and presents everything as straightforward as the story.

Pass.  I almost feel it is unfair to judge what was essentially a setup issue and a marked improvement in quality as a pass, but there is nothing revelatory here at the moment.  This may change as Jordan builds the mythos and characterization he wants into the future, but for now this single issue reads as another random assassination contract with no greater impact to the character or the world than face-value (though executed to a much better degree).  I am personally optimistic that Jordan will surprise us in the months to come, but there is a lot of ground to regain from where he has been asked to start.

Jump-On Point:  Deathstroke #15 is the start of Justin Jordan’s run.