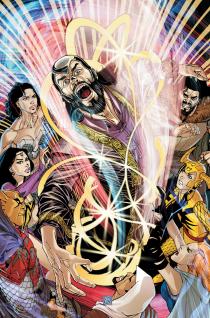 In my daily travels, I find myself strangely aware of those moments where I get to hear, say, or do something that will most assuredly only occur once in my life.  So, it is with absolute glee that I get to relay this next sentence explaining the opening scene of Demon Knights #15, that I am certain I will never type again, and should really be all you need to hear to understand this issue:

Demon Knights #15 opens with a five-way Battle Royale between the beleaguered and motley members of our team; the dinosaur-riding barbarian hordes of Mordru and the Questing Queen with their fire-bellowing mecha-dragon siege weapons; Lucifer, backed by the unfathomably massive and meticulously categorized demonic armies of hell; the heavily armored mystical defenders of the afterlife tasked to destroy all invaders to Avalon in the form of the Silent Knights; as well as the forces of King Arthur and his dauntless battalion of battle-hardened veterans; all in a battle to lay claim to the hallowed plains of Avalon and bring Paul Cornell’s mixed run on Demon Knights to its climactic charlie-foxtrot of a finish.  Contented sigh.

While Cornell has had pacing issues at the start of his fantasy epic, his finale would almost seem to suffer from the opposite problem of stuffing too much into its pages if it did not feel purposefully brought to a fever pitch in an effort to put the stakes at this level of insanity.  Neatly, if not a little conveniently, tying up every loose end from the fifteen issue run, this chapter also shows the formation of the modern-day Stormwatch, putting to rest the speculations of Merlin and the link between the two team books, while also displaying the absolute fun that was evident in spurts throughout the series to date.

The art is playful while graphic in its fantasy warfare, with vibrant colors that bring the focus of each panel to the forefront; which is essential in scenes of utter chaos on the battlefield.  Excessively detailed in the larger panels, the battle also rages in small single panel still shots of the carnage, interspersed throughout the page to keep the setting in the reader’s mind as the attention zooms into portions of the war-torn fields.

Each character in the stable is given their moment to shine, an arena that has also plagued the title on occasion, and the dialogue continues with the light-hearted sarcasm that attracted me to it in the first place.  The ending nicely puts things into a state of flux for the upcoming Venditti, who takes on writing duties next month, with a few seeds sewn in for future use when the story picks up 30 years later in issue #16.

Buy with a caveat.  As the finale to a 15 issue storyline, it makes little sense to hop on at this point as the board is being reset; even if it is a lot of fun in the process.  With that said, devout followers and casual readers alike should find a great ending to this era, while new readers get to see the setup for the new direction coming next month; and get a taste for what this title can offer with its complete lack of restraint.

Jump-On Point:  Demon Knights #13-14 would bring you almost completely up to speed, but the finale also encompasses elements from all 15 issues of Cornell’s run.