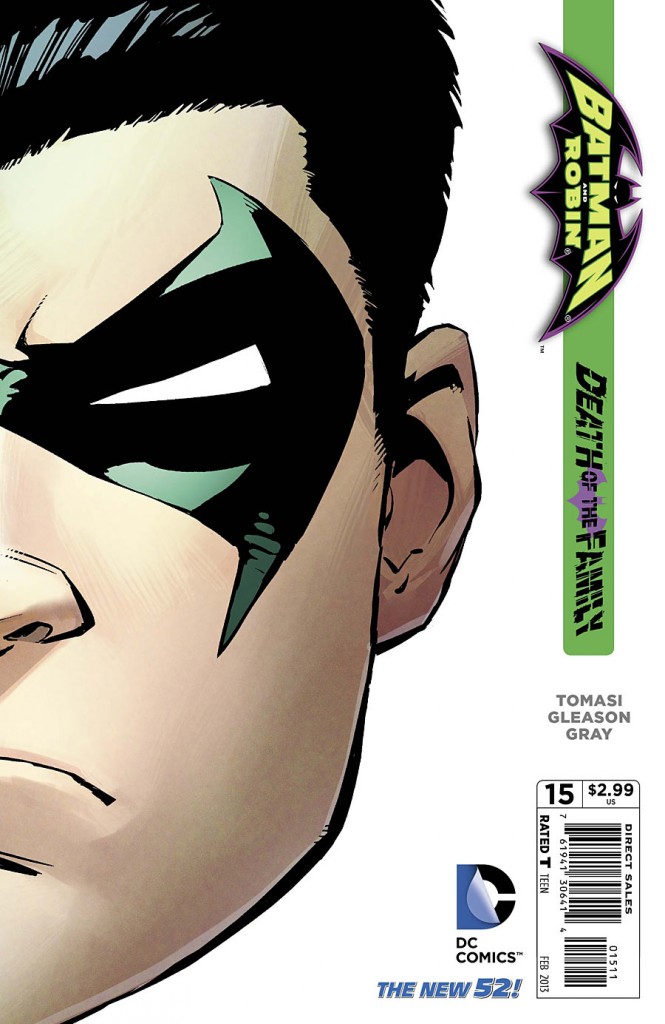 Picking up right off the heels of Batman #15, the Death of the Family mini-event makes its way over to Batman and Robin #15 with gloriously disturbing results, and leaving me with but one question to ask at the top of this review.  What have Scott Snyder and Greg Capullo done to those nice Tomasi/Gleason boys?

As the father of my own 8-year-old boy, I have found myself quite attached to the angle of the Bat-Family portrayed in this title over the last 14 issues.  Focusing more on the father-son relationship, Tomasi has done a great job of showing the earnest drive of a son seeking approval from his father, all while the man who has planned for everything finds himself as far removed from his element as the rest of us in the double-edged struggle to balance both the protection of his child with preparing him for when he enters the world.  Adding to the complication of their relationship is the nature of their time together, where emotions bring nothing but added risk to the pair; even if they both yearn for nothing more than to acknowledge their mutual pride, admiration, and love for one another.  Oh, and they fight crime together.

In this issue, with Bruce off to track down the Joker, Damian is left to man the Batcave at the insistence of his father.  Discontent to be left out of the fight yet again by his ‘overprotective’ parent, our little firecracker Damian decides for himself that the others need his protection while Bruce is otherwise occupied, and heads out to locate the imprisoned Alfred with his own stalwart sidekick; his gruff but lovable Great Dane, Titus.  Looking forward to the ‘boy and his dog’ adventures to come, I was more than surprised when Tomasi and Gleason decided to take the story into a nightmarish direction; as Damian is drugged, captured, and forced to listen to the demented ravings of the Joker when he literally falls right into the mad clown’s plans.

I usually save my comments on the artistic stylings of a book to the end, but I cannot overstate how much the visuals play into the ambiance of this chapter.  It sincerely appears as though Gleason looked at Capullo’s design, and set to work to ramp up what is already a disturbing image to the N’th degree of creepiness.  Fully cognizant of the freedom loose flesh can offer them, both Gleason and Tomasi go out of their way to incorporate the new design into their story-telling, effectively giving the Joker the malevolence he deserves, along with a dollop of the mirthful yet predatorial intelligence he uses to unbalance his opponents.  The scenes are dripping with a sense of discomfort due to the gangly nature the pencils exhibit mixed with the washed out, almost rotting, colors of the page; combining to show each highly detailed panel in all its gruesome glory.

My only complaint, and it is one that may be invalidated in the coming month, is the ending feels as though it should follow issue 16 of the main title.  If the cliffhanger is to be taken at face value, there is one step removed between the two #15 issues that will probably be addressed in the next issue of Batman.  Of course, this may be entirely incorrect as it is based from assumptions, and overall, Batman and Robin does a splendid job of feeding into the fervor of finding out what happened in the other titles while delivering a solid chapter in its own self-contained world.

Buy.  Tomasi and Gleason have been tainted by the foul touch of Snyder and Capullo’s tale; in a good way.  Monstrously repulsive visuals, disturbing dialogue, and the potential for a great followup bring B&R #15 into the crossover with both guns blazing.  I can only hope that they somehow manage to find their way back to toddlers in cowls and puppy-dog-eyed dispensers of justice from this place of horror once this is all over.

Jump On Point:  #15 works as a decent issue to join in with Damian, though following the main title in Batman would add a lot more weight to the motives of the main players.

Composed to the sounds and sensations of an 8-year-old boy, deep in training to be Batman himself, chopping me in the neck and shouting ‘Mandibular Nerve Center!’ with each strike.