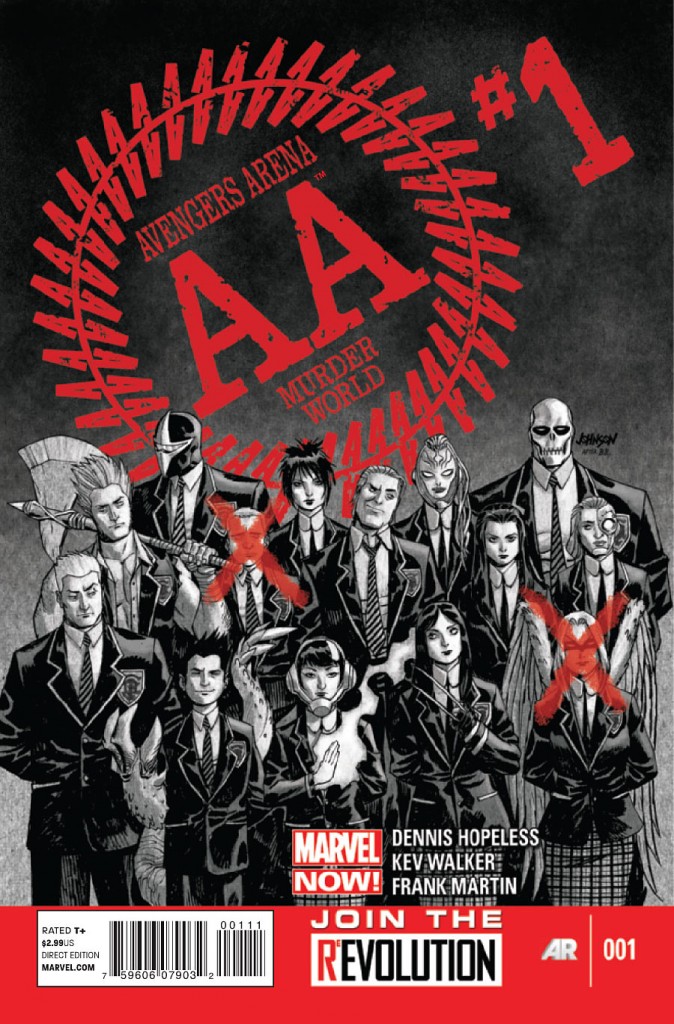 I don’t know what your first thought was when you heard of Avengers Arena, but my opinion was one of anticipation and joy. Of all of the Marvel Now releases thus far this one has had probably the most amount of mystery surrounding it due to its extreme and rather grisly premise. Should you really buy a book about young Avengers who are killing one another a la Hunger Games or Battle Royale style? Yes. Yes you should.

So what exactly is Avengers Arena? Sixteen super powered youngsters (Apex, Cammi, Anachronism, Bloodstone, Chase, Ryker, Nara, Reptil, Nico, Darkhawk, Kid Briton, Red Raven, Mettle, Hazmat, X-23, and Juston), who attend the Avengers Academy have been kidnapped during winter recess. After waking up on a mysterious island, the group soon discovers that a classic villain of the Marvel universe has taken them hostage and has placed them in a most sinister game of survivalism and death. With the clock ticking, and a madman pulling all of the strings, these young Avengers seem to have no choice but to destroy each other, all for the amusement of one sick and twisted psychopath. It’s friends versus friends, and in some cases, lover against lover. Let the games begin.

I’m happy to say that I really enjoyed Avengers Arena for what it’s presented us with so far in this first issue. I was a little surprised, but also quite delighted, when I discovered just how personal and close to the characters this book was going to be. From the very beginning Hopeless pulls you in to the plight of the character Hazmat, and her wavering hope of surviving the game. Now, granted, I don’t know if the book will always stay so close to one focal character but it was a hell of a way to start this particular story. I felt for Hazmat. I want to see her avenged. More of that, please.

Another thing you’ll note about the book is how surprisingly colorful it is. For a premise that revolves around death and destruction Kev Walker and Frank Martin have certainly given these pages lots of life and pretty colors to look at. It’s nothing outside of the lines for an Avengers or X-Men title, but it certainly compliments the severity of the situation and pulls you into the game. It’s my hope that this art team will remain on the book for quite some time.

I’m also particularly curious to find out how this book will be received by other readers in the coming weeks. It’s a title that most likely will not gel with everyone given the fact that it’s got Avengers killing one another. But I’m hoping that readers will be able to see past the violence and appreciate that there is potential for a truly gripping story here, and that the arena style premise, though it is extremely violent, may lead to some truly tender moments as well. In my opinion the relationship between Hazmat and Mettle in this issue is evidence enough that this series is capable of great emotional depth.

VERDICT: Buy it. At least give it a chance. I really enjoyed it and am totally on board for more, but it’s not going to be everyone’s cup of tea. There are some really wonderful character moments happening in this issue and I would hate to think that people would miss out due to the violent nature of the book. We’ve all got to go sometime. It might as well be while we’re protecting the ones we love from ourselves.

* This review was written while listening to the self titled album by the band I Break Horses.