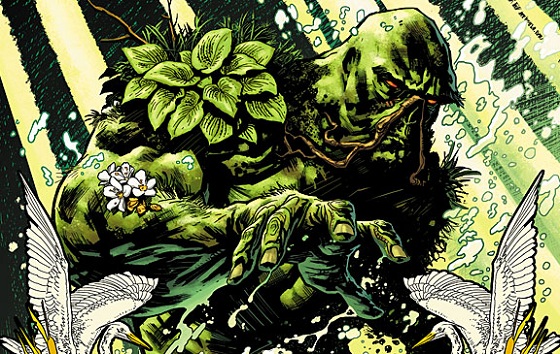 Huge changes going on over at DC this week. Gail Simone was relieved of her duties on Batgirl, and now Scott Snyder has confirmed rumors that have swirling around his breakout Dark line title. Issue #18 will be the last issue for both Snyder and Paquette.

“Hey guys – was going to wait until we got a little closer to announce this, but yes, Swamp Thing #18 will be my last issue, and Yanick’s too.

To be 100% clear: @YanickPaquette and I have been planning this ending – both an ending for us as creators on the book, and for the storyline we started way back in issue #1 – for a long time. Even before we signed on to do Swampy, we both knew it would be a limited run, as we had other projects in the pipeline we knew would eventually come to pass. But the chance to do Swamp Thing, to bring back a character we’ve both loved dearly since childhood, was just too thrilling to turn down.

That said, we both ended up staying longer than we’d planned, too, out of love of the character, love for the story we were getting to tell, love for our team, and above all, out of love and gratitude for you guys, the fans who’ve helped us do something here that many people said was impossible – make Swamp Thing a viable book in the DCU. For that, all of us on team Swampy will be forever grateful to you guys.

Truthfully, these characters are some of my personal favorites in comics, ever – the early issues by@LenWein and @BernieWrightson played a huge part in making me want to write in the first place. Then the fearless work by Moore, Bissette… The thing is, Swamp Thing has always been a series where creators did these crazy things, where they experimented, pushed themselves, imagined big, took risks – and the fact that you guys have supported our team, as we’ve tried our own crazy ideas on the book, story-wise, artistically…. it really means the world to us. It’s been a tremendous honor to write this book. And to have worked on it alongside friends like the art team – and one of my best friends in the world, and one of mu writing idols,@JeffLemire… Don’t know how to thank you all for giving me the opportunity.

Anyway, all this sounds so fucking sad, BUT – please know that these issues coming up next are the big ones – the status-quo-changing-mega-ones 🙂 – that we’ve been building towards since issue #1. So the best is still coming, with the finale of Rotworld and our shocking storyline ending in Swampy #18.

After that, Swampy will continue with an exciting new team, to be announced soon. Please give them the love and support you’ve shown us. They certainly have our blessing.

Again everyone, can’t thank you all enough for this one. You guys made this gig a dream come true in every way, corny as that sounds. I thank you, team Swampy thanks you – and from deep in the swamp, Alec Holland, Abby Arcane, The Parliament, even Uncle Anton thanks you, too.

No replacement has been named at the moment, but the interwebs have been ablaze with speculation. It seems that Steve Niles is the people’s champion thus far, but neither DC, nor Snyder, have given any indication as to who will follow in the scribe’s place.

How does this make you feel? Who do you want to take the reigns? Let us know in the comments below, or hit us up on the Twitter @talkingcomics!