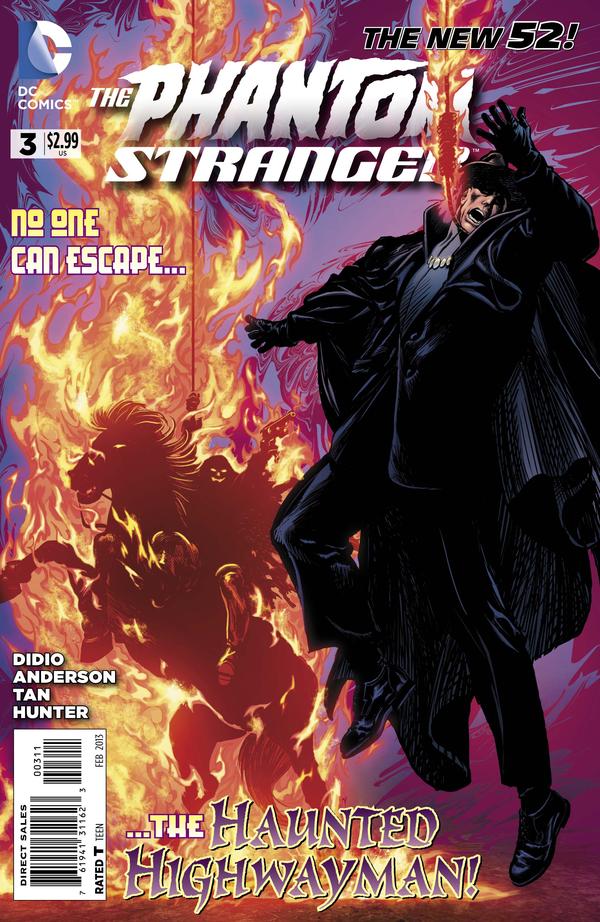 The Stranger was left in a bit of a predicament the last time we saw him. Terrence Thirteen was marked by the Haunted Highwayman for death and asked The Phantom Stranger to help him get out of an untimely, and most likely painful, death. Since The Stranger doesn’t deal with personal issues, unless commanded otherwise, he refused, but when The Highwayman showed up and attacked both of them, he didn’t really have much of a choice. After temporarily dealing with The Highwayman, The Stranger goes back home to his wife who’s dragged him to his neighbors going away party. Terrence Thirteen on the other hand knows that The Highwayman will be back, and still needs The Stranger to deal with him once and for all. Considering the aforementioned “not getting involved in personal issues,” this is going to be harder for both of them then they’d probably like.

One thing I’ll say right off the bat is it’s nice to finally seen a direction with this series that seems to suit DiDio’s writing style. The first couple of issues, while not bad, seemed to focus mainly on cameos and one-and-done stories that either seemed slightly rushed or confused me as to what this series is trying to accomplish. With this Terrence Thirteen/Haunted Highwayman two-parter we finally get a glimpse as to what The Phantom Stranger (the book) is: a problem solving book. What I mean is a book where a problem is presented and it’s up to The Stranger and his special brand of mystical powers to stop it. Like a cop procedural you’d see on TV, but with comics and mystical powers. I can dig that and DiDio does a good job with this book. Some of The Stranger’s dialogue is still wooden and a little hard to follow and his home life could use some more explanation, but otherwise it’s a good book through and through.

Brent Anderson’s art, mixed with Phillip Tan’s embellishments (who’s joined by Rob Hunter for this issue) is something that you either love or hate at this point. It’s a stark contrast from most other comics on the market today and it feels distinctly old school. Utilizing heavy blacks, grit and deep blues/reds, it’s stylistic but realistic and it’s something I’ve grown to enjoy. It won’t be everybody’s cup of tea, but it delivers beautifully colored action scenes and I always look forward to seeing this book’s art every month.

If you’ve been reading The Phantom Stranger, there’s really no reason to stop at this point. DiDio’s writing has improved with every issue and while it still has its issues, I like the direction this comic is going in. Brent Anderson’s art is something that has really grown on me and it’s something I look forward to every month. If you are at all interested in this book I say start with the zero issue to see if it’s your thing, but for me it’s a definite recommendation.