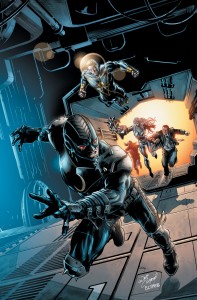 Most of us have been witness to this most socially awkward of situations.  You join some friends for dinner, or perhaps to grab a quick drink; but as the evening goes on, the tension between the earlier lovely couple seated across from you grows and escalates, finally erupting into a full-fledged screaming argument.  We stay quiet and avoid eye contact, strike up half-hearted conversation with others at the table, and do everything possible to avoid making the gravest mistake of them all; getting involved.  Stormwatch #15 pays homage to this most joyous of occasions by cranking every aspect of this lovely scene up to 11.

Out to dinner?  Pfft.  Super-secret space station tucked into a parallel dimension.

Couple sitting across from you?  Replace that meek accountant and his dentist wife with a true ‘Power Couple’.  Apollo, in essence a modern-day sun-god; and Midnighter, a ruthless fighting machine who knows your next move before you do.

Disagreement over who makes the biggest mess at home?  Doesn’t hold a candle to an overly complex plan by a former co-worker who has secretly taken the place of their inter-dimensional overlords and psy-magic-meta-somehow-aly planted false memories into a mole he arranged to easily infiltrate your super-secret space station so they could dishonestly incriminate one of the couple as a betrayer to the relationship and the cause.  Ahhh, only in comic books.

My own relationship with Stormwatch has been hit-or-miss since it kicked off in 2011.  I’ve really enjoyed the high-minded concepts being presented by the book, and because all of the members were a blank slate to me, I have been able to just enjoy the ride on the personal side of the adventure.  The character work has been astounding on some levels, causing me to actually care about the budding romance between Midnighter and Apollo; but other members of the team (ala Jenny Quantum, Jack Hawksmoor, and Projectionist) have seen minimal development overall.  Unfortunately, it has also suffered from what I like to call ‘Plot-Mandated-Stupidity’ (which, as I was aggressively informed in my own intimate arguments, is not the expanded form of its acronym); sacrificing the supposed intelligence of its characters, by way of their actions, in order to progress the story.  I’ll point out a glaring example of this in a second.

Issue #15 is actually a large moment in Milligan’s run, bringing the over-arcing plans of Harry Tanner to a head, while marking a pivotal turning point in the Apolighter coupling.  As those items take place in the forefront, Milligan is also subtly moving the background threads of Engineer and the rest of the team forward, reminding us how many plates are currently spinning in his master plan.  It’s something I love about the book, but it also makes new entry a little difficult, especially in an issue like this.  When you have characters pretending to be other people, stacked on top of the ambiguously-questionable allegiances of others, blended with misinformation being presented as fact; it can be a bit daunting for anyone trying to crack in at this point.

In this adventure, a member of the Shadow Council has arrived and informed them that their new mission is to protect the world from its biggest threat; the superheroes that have sprung up like weeds over the recent years.  As the mysteriously cosmic figure divides up the team to take on the likes of Superman, Batman, and Green Lantern, Midnighter notices something inherently odd about their apparent boss.  Meanwhile, Jack and the Engineer scoop up the ex-team member that they believed had a hand in betraying them, and bring her right on board to interrogate about the whereabouts of her accomplice.  Now either this is one of those Plot-Mandated-Stupidity moments, or there was a miscommunication as to how things were supposed to be portrayed; but while all of this is going on, Midnighter, talking to himself, is blatantly stating out loud (multiple times) that he has figured out who the Shadow Council member really is…as the figure stands three feet away from him.  So, I’m sure Midnighter’s legendary foresight was in full effect, as the faux-Council member then decides to frame Midnighter and pit his boyfriend Apollo and the rest of Stormwatch against him.  I’ll admit to being hard on the scene, but it just plays out so bizarre for these people, all of above average intelligence, to do such silly things on occasion just to get the story where it needs to be.

On the brighter side of the coin, I rather enjoy Conrad’s art as a whole.  There was a minor costume mistake (small enough that I call it nit-picking regardless of clamor), and more importantly the emotion conveyed through facial expressions in this particular issue were less than what I would like; but his action scenes have a simple sense of motion that never feel static.  While his style took a little time for me to adjust to, he has displayed a confident grasp on how the characters carry themselves as well as the directorial scope of each scene.

Split-decision.  If you have been following the book since at least #13, then pick it up, as it really starts paying off on a lot of the plot-seeds that have been sewn since issue #1.  If you are looking to just get started, I recommend passing on this issue and going back to #13 to read from there.  I truly hate being hard on a book that I enjoy the majority of the time, but if our relationship is going to grow, Stormwatch, we really needed to get this out in the open and discuss it.  Preferably not over dinner and drinks with friends.