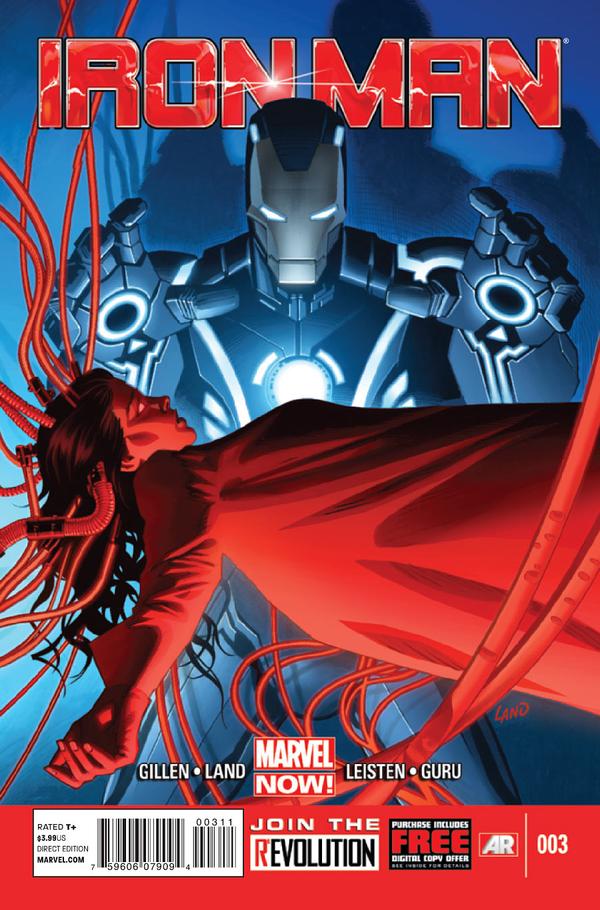 As Tony continues his quest to avenge Maya’s death by stopping any remaining strains of the Extremis serum, a Colombian drug lord gets his hands on it causing Tony to spring into action. Pepper still has some reservations about Tony’s mission, mainly where his head is at, but Tony assures her that he knows what he’s doing and that he can stop Extremis once and for all. The mission to stop the drug lord calls for a different means of execution, which also means a new suit. This suits main function? Stealth. Using a whole new bag of tricks, Tony is hoping to sneak into the compound, destroy whatever Extremis may be inside, and get out all without the guards noticing. Needless to say, it’s not going to be an easy mission.

Kieron Gillen takes a one-and-done approach to issue three, focusing on the mission while hinting at bits and pieces of the overall story arc. This execution works wonders for Gillen as he’s allowed to make a focused, thought out and well developed story. The previous issue, and to a certain extent issue one, suffered from superfluous inner-monologue and trying to shove a lot into a little, but this issue actually feels like it’s allowed to breathe. Granted there is still some cheesy dialogue to be found, and the ending, while heartfelt, can come off as a little abrupt. Luckily this issue makes up for some of the cheese with some actually funny quips from Tony, so I can’t really be too mad. My only main concern is what this story’s endgame is. We’ve seen a lot of set up or one-and-done, but with the way this comic is shipping it feels like the ending will come way too soon for this story to end properly. I have faith in Gillen though so we’ll just have to wait and see.

While I made it clear in my previous review that I’m not a huge fan of Greg Land’s art, I will give him credit in saying this issue’s art wasn’t that bad. The uncanny valley smiles and lifeless facial expressions are still there, albeit dialed back to a more manageable level, but otherwise the art is quite solid. Greg works best when he has Tony inside the suit and luckily for him, that’s a majority of the issue. The design of the new stealth suit and the way he uses it are well drawn and when the action does turn up, it’s appropriately colorful and vibrant. The most impressive example of this is the use of fire against Tony. Greg’s fire is bright, detailed and really pops out at the reader. I realize it’s a little detail, but it’s one definitely worth mentioning.

Iron Man #3 is a good example of why people should read this comic. The one-and-done aspect of the mission, mixed with the overarching Extremis story works extremely well and the humor and heartfelt nature of the issue feels appropriate and hits at the right time. Land’s artwork, while still far from good, is a solid outing from the artist that plays to its strengths well. A four dollar price tag is still a steep asking price for a comic we’ll have gotten four times in the past six weeks, but for people who haven’t read a lot of Iron Man and looking for a solid read could do a lot worse. I’d say check it out if it interests you.