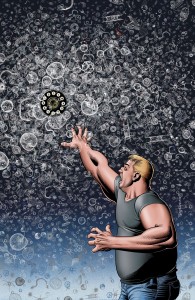 Dial H has been a strange bird for me.  While I thoroughly enjoy the themes of identity contained within its absurdist trappings, the niche it has built for itself in the DC Universe, and especially Lapham’s lighter art-style in the last few issues; something has kept me from fully embracing the title with as much fervor as I feel I should.  After last months stellar ‘break’ issue of dealing with politically correct ramifications of the randomly dialed ‘Inappropriate Indian’ (as I like to call him), it seemed like that had finally changed, reaching a turning point on the book and honestly really looking forward to picking up issue #7.  And overall, I’m fairly happy I decided to do so.

Leaving the sleepy town of Littleville behind them, Manteau and Nelson have set off into the world; tracking clues that have led them to Dial-Cults strewn about the globe in their search for a second Dial.  Forced to time-share their one functioning device, the pair have worked out a schedule in which each of them gets the dial every other day.  Nelson uses his time to fight crime at each stop of their journey in his insane personas such as Tree Knight, Shark Mage, and my personal sight-unseen favorite of Cuttlefist; while Manteau continues to press the investigation on her days of super-powered adventure.  Tracking their way to the top of the cult, they manage to humorously bumble their way through a deception for more information, pushing them to the next step of their hunt within a deep sea outpost of Atlantis.  After the age-old battle of Whale vs Plankton takes place (it makes sense if you read it), they finally find the break they were looking for.

Meanwhile, back in Littleville, a new player has entered the game; a rough and tumble agent seeking out answers as to what Ex Nihilo was up to in the previous issues.  Going by the codename ‘The Centipede’, the visual representation of his abilities combined with the clues given in conversation lead me to believe he will be one of the most exotic power-sets to date.  I am unsure about his motives of yet, but there is certainly some intriguing groundwork on building him up as a threat.

Lapham has a much cleaner style than Santalouco’s first arc.  While I have no problem with the previous presentation, the combination of bizarreness in the story with artistic insanity made it difficult to follow in the first 5 issues for myself.  In the last two since Lapham has taken the pen though, I have not been confused at all, and I believe a lot of that credit can fall into the crisper style and formatting he has brought to the book.  Unfortunately, expressiveness has also been simplified in this new direction as well, but Lapham has been able to make up for that with the clear amount of fun he is having with bringing the Dial’s misfit heroes to life.

Speaking of fun, it’s clear that as Miéville is getting a lot more comfortable with the medium, he is allowing himself to be a bit more playful in his dialogue.  The characters are sharply written and through actions and dialogue are gradually being fleshed out as more than just vehicles of absurdity; which is something I was really harsh on the first arc for.  There are more than a couple chuckles in this issue as well, and they feel as though they naturally lend themselves to the situation at hand rather than being forced.  So it is great to see forward momentum in all areas of development; both character and story.

Conditional buy.  Realistically, this is not a book for everyone.  The concepts are large, the story takes some work to follow (though much less than the first 5), and the characters have absolutely no familiarity to a new reader.  But, if you are willing to put in the effort, there is a rewarding story being presented that has a great jumping on point right here.  Though you should really go back and read #6 purely because ‘Inappropriate Indian’ is awesome.