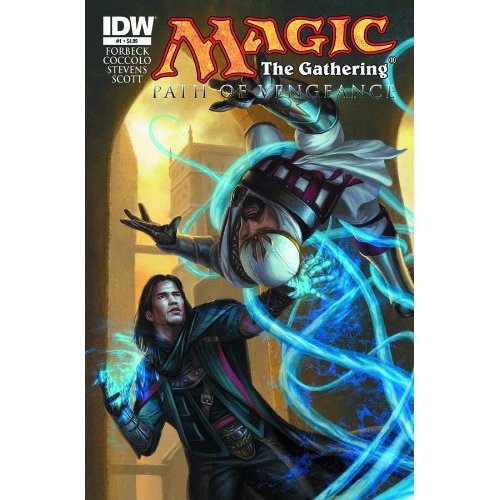 It’s been a few years since I took part in the collectible card game arena that is Magic: The Gathering (the subjective term ‘few’ meaning about 15 years in this case), but even back in those ‘Ye Olden Days’ I was always interested in the world that was being built through the flavor-text on the cards themselves.  Enough so that some of the accompanying novels have even found their way to my bookshelf over the years.  Feuding wizards, thieves, and enchanters; travelling between dimensions and lands to acquire every artifact they could to expand their arsenal.  All while an eternal battle against their fellow ‘Planeswalker’ brethren raged on in an ever-escalating magical Cold War.  So when I saw the release of Magic: The Gathering – Path of Vengeance #1 this week, I happily picked it up; eagerly looking forward to checking-in on this nostalgic property as I thought, ‘With this type of setting, how could a comic go wrong?’

Unfortunately, this book is both psychic and does not understand the purpose of a rhetorical question, as it decided to answer my mental inquiry with a demonstration of how it could do just that.

After reading the recap paragraphs at the beginning of the book, I flipped back to the cover to verify that this was a first issue.  Two brief paragraphs name no less than 8 different characters, places, and items (which are difficult to categorize due to fantasy naming conventions), as well as an entire backstory that has preceded this tale.  I have no qualms with breaking stories into self-contained chapters to facilitate the renumbering to #1 after a few issues (subjective ‘few’ equaling ~6’ish in this case), but that is conditional on the fact that you can quickly and easily bring new readers up to speed as demonstrated in the recap page of books such as Locke and Key.  Barring a simplistic recap, at the very least there must be a re-introduction of who the protagonist is in the opening pages, but more on that later.

That deluge of information behind us, we meet our lead character; a gentleman rogue by the name of Dack Fayden, carrying the mortally wounded body of what I assume to be a friend into the clinic of someone who appears to be an ally.  Regrettably, that is as precise a statement I can make on the first quarter of the book as a new reader.  Neither the ally nor his injured ward are really elaborated upon in the scene, given context in the conversation, or even mentioned in the exposition bomb found in the recap; which makes it very difficult to feel anything more than perplexed when the book then spends so many pages in a desperate struggle to try to save the man’s life.

It is a disheartening situation to find oneself utterly lost from the start, and while caption boxes narrated by Dack do their best to try to naturally bring me up to speed, any ground gained from their efforts is quickly lost due to some formatting missteps that completely derailed my reading experience.  Dack uses his unexplained abilities to see through the eyes of an items owner, which takes the book into a first-person view that is admittedly well-encapsulated by a mystic border, dividing that segment of the story from the main narrative as it takes place.  What really flummoxed me though, was the following scene immediately after Dack leaves the clinic; which is an unmarked flashback on the city streets of Dack’s first meeting with the injured man he hauled into the clinic at the beginning.  It took my second read to realize it was a flashback, and my third pass to put together who he was talking to.  This is followed by a page-turn reset to the present day that is also not clearly designated, causing the expository nature of the flashback to lead to more confusion than it does enlightenment.

The action comes from a chase scene across the rooftops of the city-plane of Ravnica as the book draws to its close that is actually quite fun; but ends with a cliffhanger that loses some punch from my lack of knowledge.  I can make assumptions as to the implied nature of the ending twist, but without a real sense of who these characters are, it unfortunately does less to intrigue me for the next issue than it does in pointing out how little I know about any of the cast after reading the introductory chapter of this tale.

Art is serviceable throughout, and there are a few panels (4-5 in case you were curious about subjectivity) that look quite beautiful interspersed within the book.  Backgrounds are excessively sparse throughout most of the book, which is a shame, as the setting practically screams for the wondrous to be occurring all around them.  An interesting sidebar though, the artist has gone to great lengths to add items from the game into the surroundings of the story, giving a lived-in history to some of these cards that may intrigue devotees of the CCG.

Sadly, I have to give a pass on this particular issue from a new reader perspective.  Even with a modicum of history under my belt with the overall concept, the issue left me confused and guessing when it came to the personality and motives of its lead character and supporting cast.  If you have been following the adventures of Dack in his previous run, this may provide a good issue to set the stage for his next set of trials, but all others would probably be better serviced by going back to the last run’s #1 and starting from there if interested.  For now though, I’m tapped out.