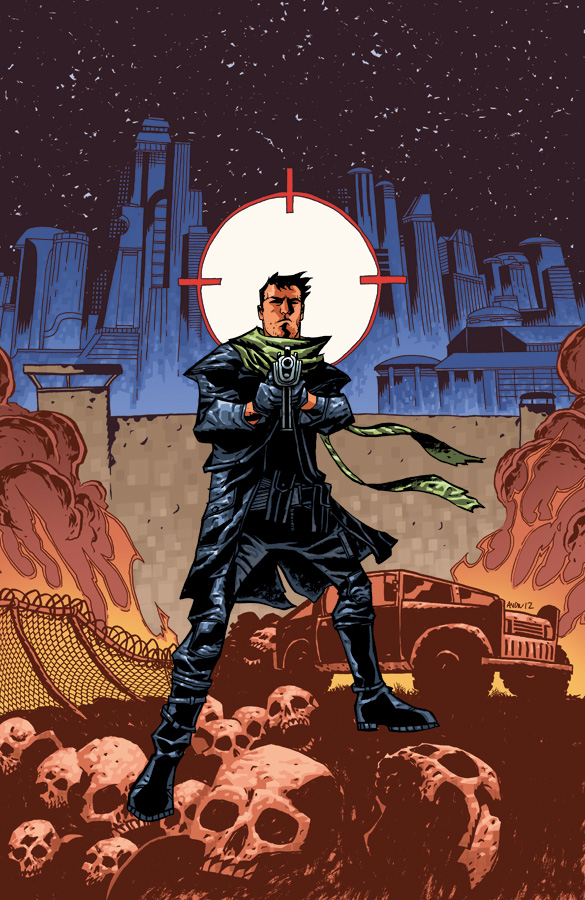 Escapism is a funny thing.  While many look to comics as a venue to decompress through the fantastic and surreal adventures contained within their pages, there has always been room for the stark contrast of a near-future sci-fi setting.  Often bleak, pessimistic, and character-driven, these foreboding tales of our possible tomorrow still offer a sense of escape in an entirely different manner than their counterparts; through their unnerving grasp on reality.  It sounds contradictory, escapism through grounded realism, but BlackAcre #1 from Image this week is a great example of how it works.

Set in the year 2114, we still await our jetpacks and laser-rifles, as the world is reeling from the fiscal and territorial collapse of governments around the globe decades prior.  Bringing the reader from the present to this grim date, a prologue in the form of a professorial lecture on the ‘American Dark Age’ (the symposium taking place even further in the future) weaves its way forward with the calculated logic of a futurist to simply explain how the world got to its apocalyptic state.  Starting from the headlines that could be taken from any newspaper today on the financial uncertainty of nations across the planet, BlackAcre’s timeline diverges when a consortium of wealthy and powerful individuals strike a deal with the United States government.  Agreeing to assist with the short-term debt problems of the nation with an infusion of cash and a promise to provide energy/defense solutions, the consortium’s only request is for a portion of the government-controlled lands north of the Rockies to develop as they please.  As the temporary solution holds the nation aloft long enough, the consortium, publicly know as Excorp, builds it’s own metropolitan City-State named BlackAcre within the lands it was granted; erecting a walled sanctuary to act as refuge for the elite, while outside its lavish safety the nations of the world spiraled into dissolution.  You would think a book that starts with a collegiate lecture on faux-history would start off too slow, but the manner in which it is told is actually an interesting read.

The backdrop prepared and the prologue complete, the story follows Captain Hull, a life-long military man who is finishing his tour of duty on the wall that has separated BlackAcre from the wilds successfully for years.  The character is empathetic and relatable within the span of a few pages, easily reminding us that the role and lifestyle of a soldier is constant throughout time, while injecting the needed humanitarian lens to view this dystopian world.  Leaving the borders and returning to civilization, he finds himself embroiled in the political maneuverings that would only be natural after putting so many power brokers into one location.  Meanwhile, outside the gated bastion, a savage war is waged between the survivors of the now-defunct United States; various factions both religious and political struggling to survive in the harsh environment they now find themselves within.

Bringing this brave new world to life, Cavalcanti performs a commendable job in displaying genuine emotion (or lack thereof) on the faces of the characters, while providing a clear stylistic dichotomy between the citizens of the wild in comparison to the denizens of BlackAcre.  My only minor complaint would fall in the detail of the city itself, but that may be due to the overview nature of the issue that prevented them from showing smaller aspects of life within the compound.  Layouts are rather standard, but the experience as a whole with each page is more than sufficient to move the story forward.

As I stated at the beginning, one of the biggest strengths of this story is its ability to casually lead you from checkpoint to checkpoint; logically advancing the gloom of the modern-day headline and drawing the line out to a worst-case scenario, where it becomes a setting as fantastic as any fiction, but rich with realistic underpinnings to build off of as the story progresses.  And as we look to our books for a brief reprieve from the news-cycle inundation of these very situations, the opening salvo of BlackAcre delivers just that.

Buy.  World-building is one of my favorite parts of any entertainment medium, and Boudreau brings it in spades in this first issue.  By the final page, I was fully interested in where Hull’s journey would take him within this obviously detailed setting; and the potential of a large sweeping epic already bearing the fruits of double-cross and intrigue in its introductory issue has me looking forward to the future.  Certainly not 2114 future, but just about a month from now will do.