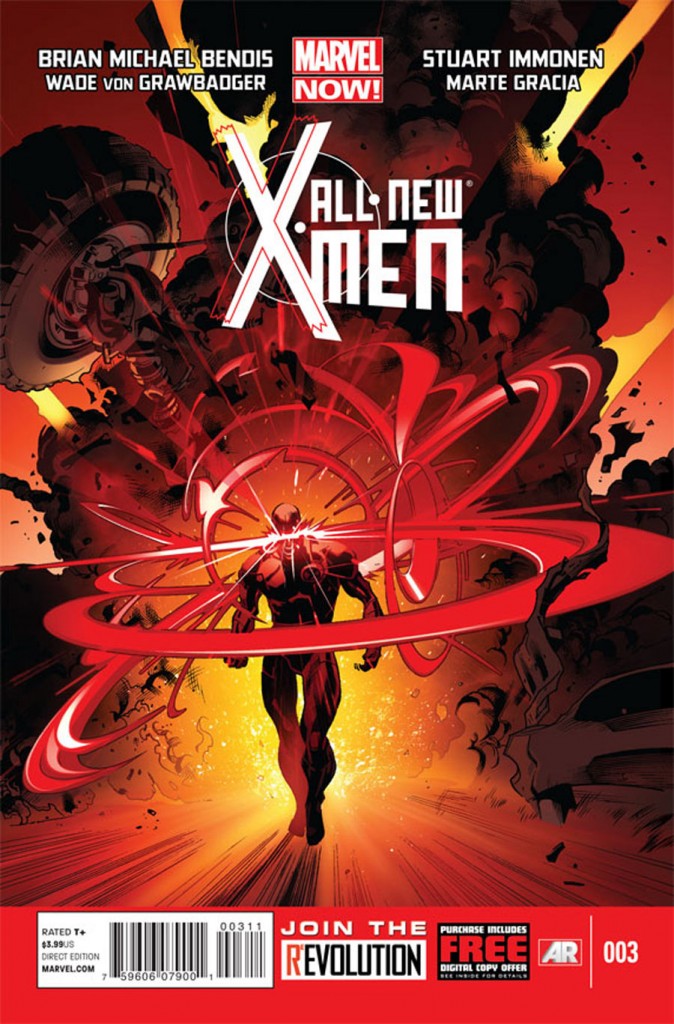 ::BEWARE! Some Spoilers Within!::

Whereas last week’s issue focused entirely on Beast recruiting the Young-X-Men, this week’s entry in Brian Michael Bendis’ All-New X-Men focuses entirely to Cyclops, Magneto, and Magik’s revolution. And yes, you read that correctly: this is the third issue of All-New X-Men in nearly as many weeks (#1 was released November 14th). If anything, this rapid-fire release schedule accommodates Bendis’ incredibly decompressed storytelling. If I had waited a month for this issue, only to find the character developments and plot beats from #2 completely shirked in favor of this parallel storyline, I might be a tad bit miffed. Bendis’ books have a tendency to read better in trades, so releasing weekly or bi-weekly has mediated some of that exasperation.

So what about issue #3? Well, it’s just alright. All-New X-Men debuted strong with a fresh take on the X-Universe and a smorgasbord of Bendis’ trademark banter, wit, and characterization. Issue #2 continued that trend with some fascinating interaction between the Young-X-Men and Wolverine’s school. Issue #3 shifts over to Now-Cyclops, and his dismal mood is mirrored in the book’s dour, tedious read. There is some explosive action as Cyclops and Magneto violently break Emma Frost out of SHIELD custody, and there are some new developments on the Phoenix-front, but overall issue #3 feels devoid of the energy and life that the first two issues carried. As an avid X-reader during the Emma Frost/Scott Summers era, I was especially disappointed in Bendis’ handling of Emma’s voice and the “break-up” between Emma and Scott. Their relationship has been at the core of multiple X-series since Grant Morrison’s landmark run on New X-Men back in 2001, and some of comicdom’s best writers—Joss Whedon, Ed Brubaker, Mike Carey, Matt Fraction, and Kieron Gillen—have layered emotional nuance and resonance into their relationship in the years leading up to Avengers Vs. X-Men. At least here in issue #3, Bendis’ handling of this next step in their crumbling relationship falls short. Of course, he has stated that January’s new volume of Uncanny X-Men will delve into their relationship, so perhaps this will all be remedied over in that book, but if Emma Frost still speaks as she does here, then I’m afraid I’ll have to keep my expectations low.

The issue hinges on the aforementioned complications brought about by the Phoenix. While new mutants are popping up around the globe, it seems that some of Cyclops’ merry band of revolutionaries are experiencing shifts in their mutant powers. And this leads to some strife between Cyclops and Magneto. And Cyclops gets struck with some of that trademark Summers’ guilt again. Before this thread can develop fully, Emma Frost—apparently now in cahoots with the same Scott Summers she waylaid a few panels earlier—identifies a new mutant on her iPad (in a cave) and they whisk away around the globe. For a series that has thus far emphasized decompression and carefully paced character beats, this issue is a haphazard amalgamation of odd characterization and unfulfilled plot developments. The ending of the issue promises an exciting confrontation in two short weeks, so perhaps All-New X-Men will truly kick-start with issue #4.

This issue’s saving grace is Stuart Immonen and Company’s artwork. It’s absolutely stunning. Immonen’s figures are detailed and emotive and his panels are innovative and crisp. The issue runs the gamut from kinetic, explosive action to subtle facial expressions, and Immonen hits every beat perfectly. Von Grawbadger’s fine inking do not overpower Immonen’s nuanced designs, and Marte Gracia’s colors are vibrant and striking. This issue is washed in reds and blacks to mirror Cyclop’s increasingly turbulent revolution. Exquisite.

Despite my misgivings about this issue in particular, I still think that All-New X-Men will turn out to be a worthwhile series. Perhaps this side of Bendis’ X-Universe is just the weak end, whereas his handling of the Young-X-Men, Beast, and Wolverine’s school will be the high point. Fortunately, we’ll return to those stronger characters and that stronger storyline in two short weeks. I’d say pick this book up for completeness, but this issue is a weak entry in what has otherwise been an engaging new series.