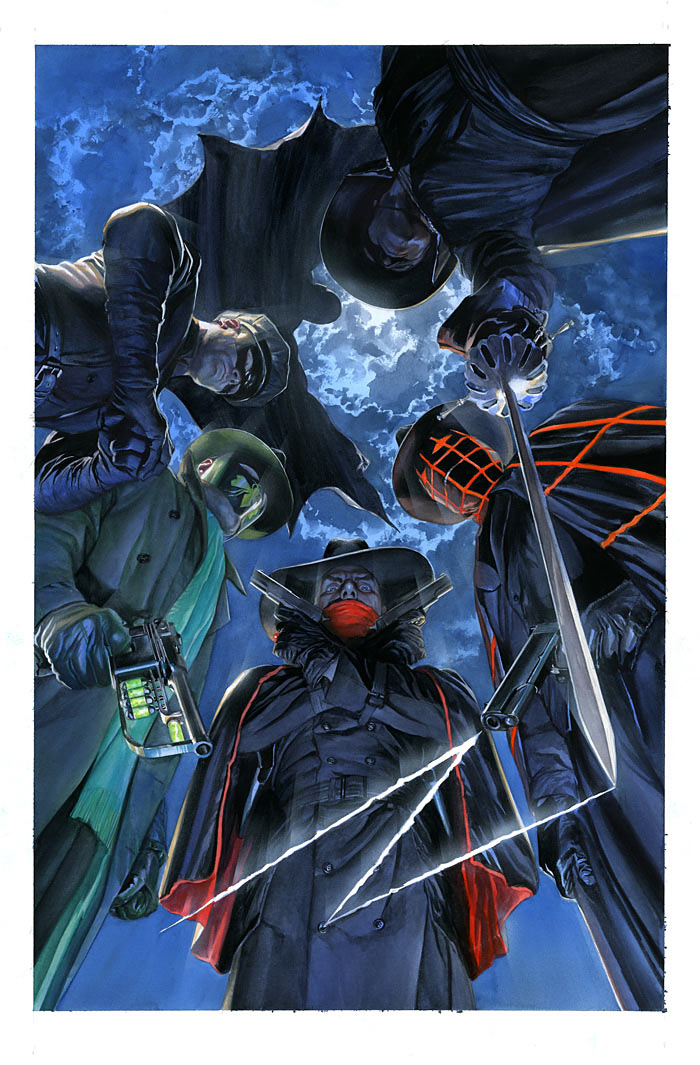 It was a dark and stormy night, and we were gathered around our Philco console radio when we heard a spectral voice intone “Who knows what evil lurks in the hearts of men? The Shadow knows…”

Sorry for having my “announcer” go on a bit, but there really wasn’t any other way to begin this piece. I’ve been a fan of old-time radio adventure characters and their pulp magazine counterparts for many years, so I’ve been eagerly anticipating the release of Dynamite Entertainment’s Masks, which brings together The Shadow, The Green Hornet & Kato, The Spider (“Master of Men”!), and Zorro for a once-in-a-lifetime gathering against a foe that requires all their skills to overcome.

Chris Roberson’s story opens on the Green Hornet and Kato rousting a hoodlum for leads on his boss, when they are interrupted by the Shadow, who dispatches the murderous thug with his twin .45s. Promising the Hornet that more information awaits him at the Cobalt Club, the mysterious figure vanishes amid a torrent of eerie laughter. This 5-page sequence literally gave me goose-bumps, as I could hear Orson Welles, the radio voice of the Shadow, as I was reading it. Mr. Roberson understands the essence of these iconic characters and delivers it quickly and without fuss or artifice, in a most entertaining and slam-bang way. 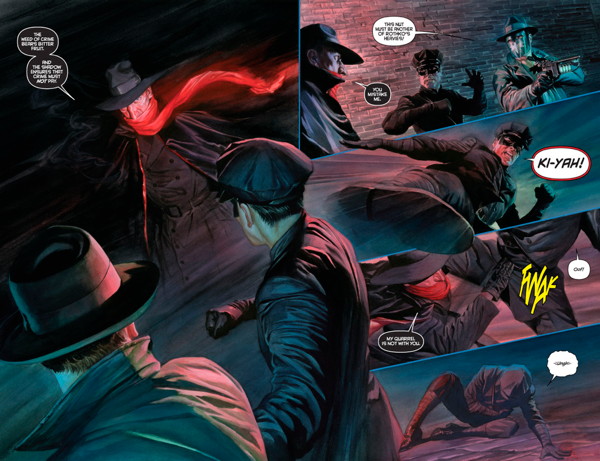 Our back-story and plot, told in newsreel form, revolves around the new “Justice Party”, which has taken control of the New York state government, imposing Draconian penalties and taxes, and dispensing “justice” via their “Black Police” and a corrupt judicial system. This story is apparently based on Norvell Page’s “The Spider vs. the Empire State” trilogy of pulp novels from 1938, which were meant to be analogous to the growing Nazi oppression in Germany and Europe. It’s a masterful stroke by Mr. Roberson, as this setting is in keeping with the characters usual bill-of-fare of political and ground-level villainy, but the stakes are set much, much higher.

As to the art, what more need be said but “Alex Ross”? Most are familiar with his amazing cover paintings on various titles, but his sequential work is always interesting, with panel lay-outs in some ways very reminiscent of a series of old movie studio promotional stills, with “jump cuts” from one angle to the next creating a powerful forward momentum that is quite involving. Per usual from Mr. Ross, the attention to detail and mood is stunning; you can “hear” the tinkling of glasses at the Cobalt Club and “feel” the weight of the gathering crowd of oppressed citizenry.

For many, Alex Ross’ artwork is the sole reason to purchase Masks, but it’s Chris Roberson’s story that allows the art to flourish as more than just a series of beautiful paintings, but to function instead as an engrossing entry into a long-ago world of snap-brim fedoras, powerful sedans, and the growing threat of fascism. This combination of words and images has me waiting impatiently for the next installment…which may also feature The Black Bat and Miss Fury!

VERDICT: Even if you are only vaguely familiar with these characters from their movie adaptations, Masks is worth your entertainment dollar. If you are a fan as I am, it’s a welcome return to those “thrilling days of yesteryear”, and is highly recommended!

The Spider vs. the Empire State

An Informal History of the Pulp Magazines Ron Goulart(1972/Ace)

Zorro: Created in 1919 by Johnston McCulley

The Shadow: Created in 1931 by Walter Gibson

The Spider: Created in 1933 by Harry Steeger

Soundtrack: This piece was written whilst listening to Benny Goodman’s “Trio and Quartet Sessions” and the Mercury Theatre “War of the Worlds” broadcast of October 30, 1938 starring Orson Welles.